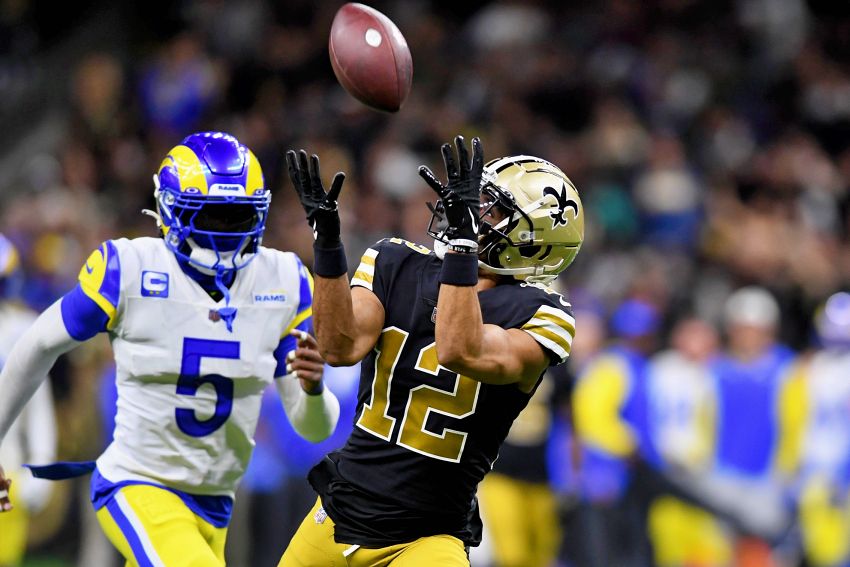 The fans were a bit subdued heading into game time. The New Orleans Saints were wearing throwback uniforms.

Two teams with a massive number of injuries to key players and who have been massively disappointing hooked up in the Caesars Superdome.

It was the first time the two teams played each other in New Orleans since the infamous “Nola No-Call” NFC championship game on January 20, 2019. The fans were reminded of the “play” on the big screen early in the fourth quarter.

This time around, there would be no need for a call that would determine the outcome.

Andy Dalton, who has been maligned on many fronts after the offense sputtered in losses to Baltimore and Pittsburgh and whom many had called on to be replaced by Jameis Winston, had other thoughts.

Dalton turned in his best performance as a Saint. It was, though it is nearly sacrilegious to invoke the name, a Drew Brees-like performance.

Despite playing with a patch-work offensive line, Dalton took care of the football, made good decisions and threw accurately. He finished 21 of 25 for 260 yards with three touchdowns for a near perfect Quarterback Rating of 149.6 You could not ask for more.

The Saints dominated the second half and shut the door, getting off the floor and leaving fans wanting more while leaving the Rams sore.

Here are my Quick Takes from the 27-20 New Orleans win over the Rams:

**David Onyemata played in his 100th game with the Saints. He was in on the first tackle of the game, a 4-yard run by Darrell Henderson Jr.

**The Rams had a third-and-one from their 34-yard-line and tried a speed sweep with Brandon Powell but Paulson Adebo fired to the edge and hit Powell for a 1-yard loss.

**As expected, the Saints opened with three reserves as starters up front with Josh Andrews at center, Calvin Throckmorton at left guard and Landon Young at left tackle.

**On the first offensive play, Alvin Kamara dropped a swing pass from Andy Dalton. Kamara had lots of room to run.

**The Saints took a 3-0 lead on a 46-yard field goal by Wil Lutz with 4:14 to play in the opening quarter. New Orleans drove to the Rams 13-yard line, Taysom Hill, at quarterback, threw incomplete for Jarvis Landry in the end zone before Greg Gaines and Leonard Floyd broke through the patched-up New Orleans offensive line for sacks on consecutive plays to kill the drive.

**It took the Rams just one play to erase the deficit and take the lead as Matthew Stafford hit TuTu Atwell with a 62-yard bomb for a touchdown to give Los Angeles a 7-3 lead with four minutes left in the first quarter. Atwell simply ran past Chris Harris Jr. and Stafford hit him in stride for the score.

Ran right by him. @tutuatwell

**The Saints got a stop, got very good field position at the LA 49-yard-line and took total advantage of it, driving 49 yards in seven plays, taking three minutes and Dalton hit Juwan Johnson with an 8-yard touchdown pass to give the Saints a 10-7 lead with 12:11 to play in the first half. It was Johnson’s fifth touchdown of the season. Johnson has scored a touchdown in three straight games.

Andy Dalton throws a strike to Juwan Johnson and the @Saints take the lead!

**Los Angeles drove to the New Orleans 34-yard line and on fourth-and-one, elected to go for it. Payton Turner and Demario Davis stuffed Kyren Williams for a 1-yard loss for a big stop.

**Unfortunately, Turner was injured on the play and was carted off with an ankle injury.

**Stafford then engineered a classic, near perfect two-minute drill, taking Los Angeles 87 yards in 11 plays, taking 2:54 off the clock while leaving just 19 seconds left in the half in doing so. Stafford capped the drive with a 6-yard touchdown pass to Allen Robinson Jr. for a touchdown to make it 14-10 Rams at the half. Receivers were open throughout the entire drive.

.@AllenRobinson and the @RamsNFL retake the lead before the half. #RamsHouse

**New Orleans took the second half kickoff and drove 75 yards in nine plays, taking 4:37 off the clock with Dalton hitting Jarvis Landry on a 7-yard touchdown pass to give the Saints a 17-14 lead with 10:23 to play in the third quarter.

**Demario Davis then got a sack on the next Los Angeles possession, the first of the game by New Orleans, forcing a Rams punt.

Davis takes down Stafford for a 9-yd loss on 3rd down #LARvsNO | 📺: FOX pic.twitter.com/2LUMWkZU00

**Stafford went to the locker room to be evaluated for a concussion.

**The offense came through again, overcoming a 13-yard sack of Dalton on an attempted trick play that backfired. The Saints did not need a trick as Dalton, while being hit from behind, delivered his best pass of the season, a perfect dime of a deep ball to Chris Olave for a 53-yard touchdown to give the Saints a 24-14 lead with 5:47 to play in the third quarter. The drive covered 68 yards in five plays.

**Bryce Perkins took over for Stafford at quarterback.

**The Saints added to the lead, driving 69 yards in nine plays, taking 5:42 off the clock with Lutz kicking a 25-yard field goal to make it 27-17 with 9:06 to play in the game. Taysom Hill ran twice for 19 yards and completed a 14-yard pass to Olave on the drive. A sack of Dalton killed the chance at a touchdown after New Orleans reached the 3-yard line.

**Carl Granderson and Kaden Ellis got consecutive sacks of Perkins on the final Rams possession to put the game away.

Ellis was simply superb, recording 11 tackles, including 1.5 and a tackle for loss. He had a pass defended and two other quarterback hits.

Olave continued his brilliant junior season with five catches for 102 yards and the touchdown.

This was a good win for New Orleans, regardless of the competition. The Saints did what good teams do. They ran the ball effectively. They passed the ball very efficiently. They made key plays on defense. They punted well and made field goals. They won time of possession after being dominated in that phase the previous two weeks.

Most importantly, the Saints made no mistakes, committing no turnovers and committing just two penalties for 15 yards.

That is a winning formula, one that has been sorely lacking this season.

For one Sunday afternoon, it was nice to see.

Whether the Saints can maintain and sustain that kind of performance is what remains to be seen. New Orleans will hit the road for a much tougher assignment against the 49ers in northern California next Sunday.

We will find out if this week was simply a mirage against a wounded animal or if there is still a beast waiting to emerge from the Black and Gold in what has been a season of least, to this point.