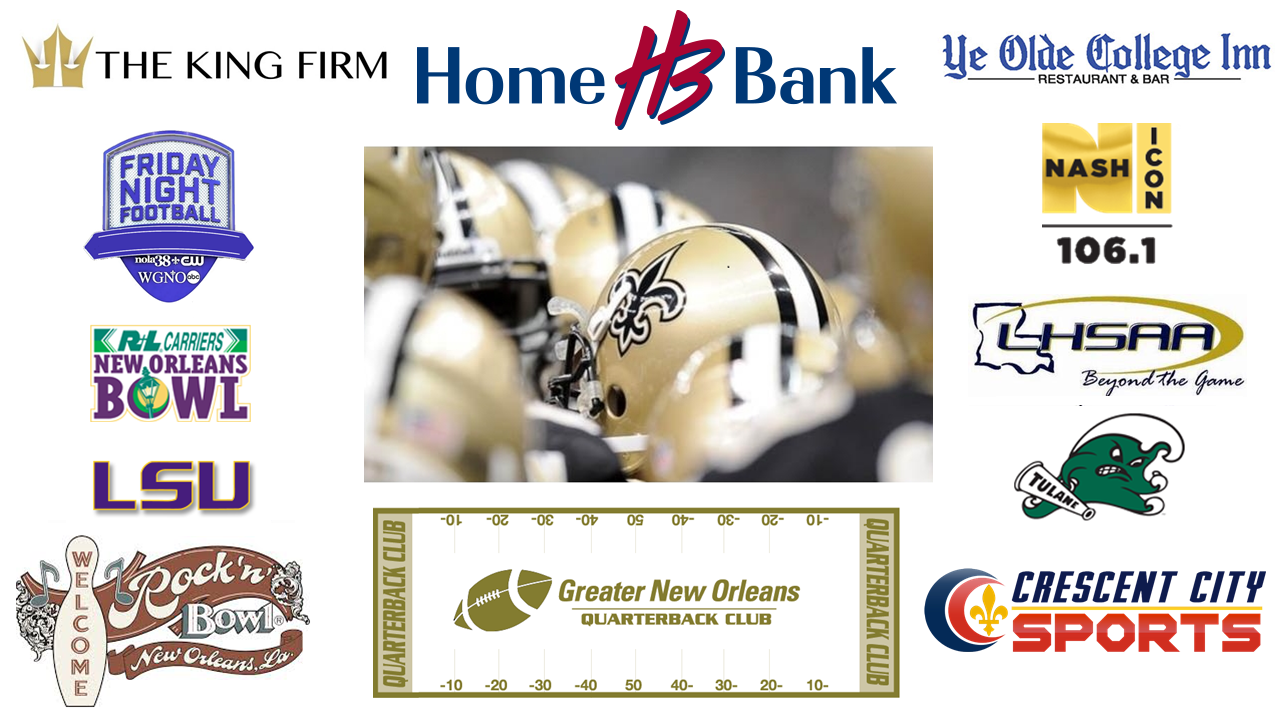 Entering its 81st year as a local tradition, the Greater New Orleans Quarterback Club meets each Tuesday for 17 weeks at Rock’n’Bowl for noon luncheons from Aug. 27 through Dec. 17, when the club will hold its year-end awards function.

The Quarterback Club is pleased to announce the return of Home Bank as the presenting sponsor for a second consecutive year in 2019.

“I think there is nothing more New Orleans than high school, college football and the Saints,” Zollinger said. “It is part of the fabric of the community and as a true community bank, we are proud to be associated with the Greater New Orleans Sports Foundation Quarterback Club. We look forward to having a great year.”

Each week, an R&L Carriers New Orleans Bowl Prep Player of the Week is chosen, presented by Crescent City Sports and NASH ICON 106.1 FM while the King Firm Scholar-Athlete award winner will also be introduced, presented by Friday Night Football from NOLA 38 and WGNO 26.

Members and non-members are invited to the weekly luncheons, which are held every Tuesday for 17 consecutive weeks through December 17.

Annual standard membership is $50 per person with premier annual membership at $80, which includes a Greater New Orleans Sports Foundation Quarterback Club golf shirt and lapel pin, along with reserved seating. Luncheons are $20 per person for members and $25 per person for non-members. Purchase tickets to luncheons here.

CrescentCitySports.com serves as the official web site of the GNO Quarterback Club while Compliance Technology remains a key presenting sponsor, along with NASH ICON 106.1 FM.

The weekly cost for members for lunch is $20 while non-members are welcome at $25 each. Speakers on the Saints, LSU, Tulane and prep football are featured every week. Other special guests are scheduled throughout the season.

Note: For information on the club including weekly releases on scheduled luncheon speakers and all past speaker videos, click here.

In support of local student-athletes pursuing higher education, King Firm will be the presenting sponsor of the High School Scholar Athlete of the Week award that recognizes a male and female high school senior from the Greater New Orleans area. The recipients will be recognized weekly at the Quarterback Club luncheon.

Additionally, each recipient will be recognized on field during the R+L Carriers New Orleans Bowl in the Mercedes-Benz Superdome in December.

Friday Night Football, the state’s best high school football highlight show, is also a presenting sponsor of the scholar athlete awards. Watch FNF with Ed Daniels and J.T. Curtis on football Fridays at 11 p.m. on NOLA 38 and midnight on WGNO-TV 26.