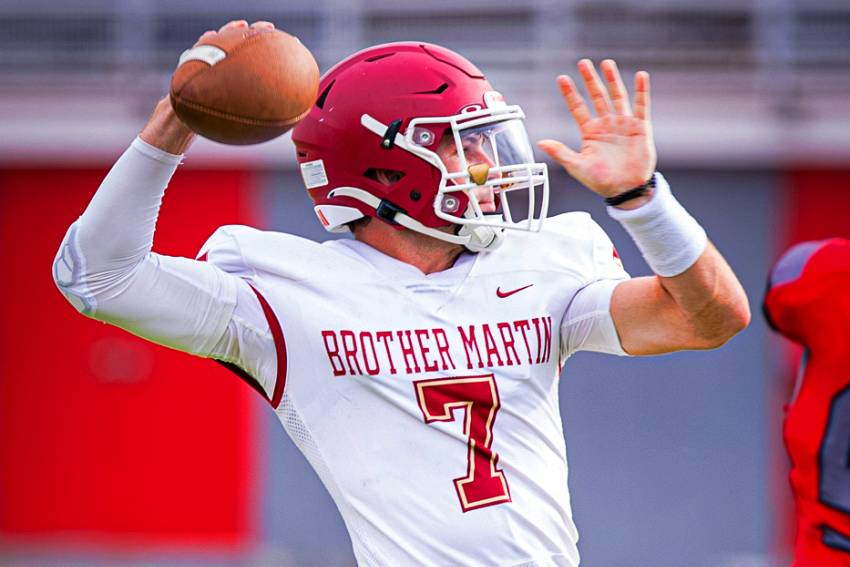 Brother Martin’s Clayton Lonardo could aptly be classified as a Jack of all trades. He has lined up at quarterback, wide receiver, safety, an up-back on punts and other special teams roles.

Next, Lonardo will bring the total package to the Southeastern Lions for 2023.

Named All-State and first-team All-District, the 6-foot-3, 215 pounder also considered an offer from Marshall, Nicholls State, Louisiana Christian and Butler Communnity College (Kan.). He has 4.6 speed and holds a 3.4 GPA. Lonardo is a player who simply makes plays wherever he lines up.

Playing for a winning program and the close proximity to home played roles in his decision.

“It really feels like home. It’s close and I had a good camp there,” Lonardo told me Wednesdsy evening.

As a receiver, he possesses reliable hands. Lonardo is an excellent blocker on the edge. Not one to celebrate catches, he will stick his nose in the action and do the dirty work.

“I can make a highlight tape as a blocker,” he said laughing. “I used to take tight end reps.”

A strong runner who reminded some of a current versatile New Orleans Saints star as an offensive weapon, he will make the 50/50 catches in a crowd and makes good decisions with the ball in his hands.

“They call me Clay-som, in reference to Taysom Hill,” Lonardo explained about his Swiss Army Knife role this past season for the Crusaders offense.”When I switched to receiver, I did all the things he did.”

Lonardo has the skills and physicality to play safety as well. So far, he has enjoyed playing receiver the most.

“I thought it was more fun,” Lonardo noted. “More action.”

The assumption is that Lions head coach Frank Scelfo will give him an initial look at wide receiver once he’s on the Hammond campus. That’s okay with Lonardo. “I like to run a post over the middle,” he said.