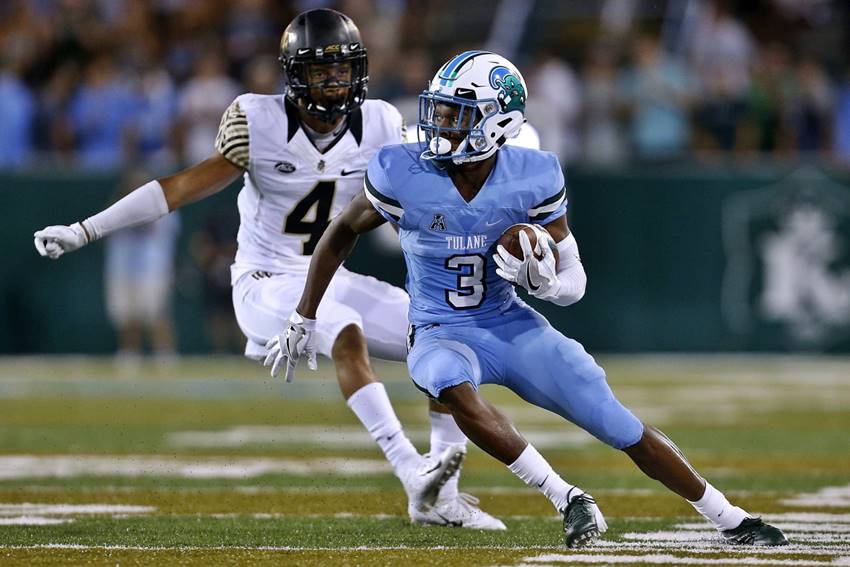 It didn’t make headlines in the NFL Draft but maybe it should have.

On the final Saturday in April, the buy-in paid off.

“We talk about recruit, retain and develop,” said Fritz.

Keyes was the consummate late bloomer. He didn’t start playing football until 2014.

Six years later, Fritz was taking a phone call from Kansas City Chiefs president Dan Crum, a former New Orleans Hornets executive. Crum knew if Keyes wasn’t drafted, the competition for him as an undrafted free agent would be stiff.

When Keyes was selected with pick No. 237 in the final round, Fritz’s phone rang several times.

“I had five teams call me and tell me they were picking him, with the next pick,” said Fritz. “I think the sky’s the limit for the kid.”

Fritz said an injury kept Keyes from playing in Tulane’s Armed Forces Bowl victory over Southern Miss and from running at the NFL Scouting Combine.

“Everyone had to question how fast he is,” said Fritz.

There were no such questions about Mooney.

Mooney was drafted with pick No. 173 in the fifth round by the Chicago Bears.

Despite grabbing nine touchdown passes in his senior season at Gadsden (Alabama) High School, Mooney had no offers.

Fritz said Keyes and Mooney both fit what he considers cornerstones for the program.

“Both of those guys are great competitors. We talk about a culture that a guy thrives in and wants to stay year after year. Nowadays if a guy is unhappy for a day he starts thinking about transferring,” said Fritz. “You want to have guys with character who can fight through adversity and enjoy where they are and what they are doing.”

Fritz said that he has invited several guest speakers for his team’s recent Zoom meetings.

Former Tulane and Slidell high star Matt Forte was “unbelievable,” according to Fritz.

Former Fortier High star cornerback Aeneas Williams was described as “awesome.” Williams was inducted into the Pro Football Hall of Fame in 2014.

Fritz said the unexpected time away from the team because of the COVID-19 pandemic has allowed him to watch “a lot more film.” He hasn’t spent much time thinking about what his plan will look like when a start time is determined for the 2020 college football season.

When it is? “I will have one knocked out in six hours.”

Fritz said a month is enough to get a team ready. “I think we need four weeks, like we normally do,” said Fritz. “I am an old junior college coach, coached high school ball, Division II ball and I-AA ball. We didn’t have our guys there in the summer either.”

The Green Wave will be prepared ahead of time to make the most of the preseason provided. “You can come in, four weeks, and get yourself ready like the old days,” Fritz said.