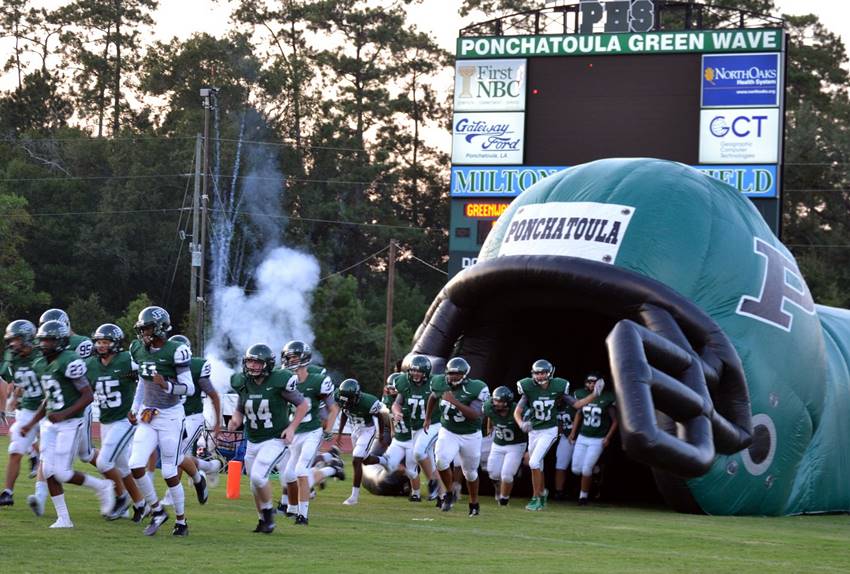 It is never easy taking over a successful program which enjoyed its most successful season ever.

It is even more difficult to succeed a legend.

Ponchatoula just had its most successful season since winning a state title in 1940, reaching the Class 5A state championship game in 2021.

The Green Wave did so under legendary coach Hank Tierney, who reached the magical 300 win total for his illustrious career in the midst of the run to the title game.

Tierney departed after the season to return to his roots in a second stint as the head coach at Archbishop Shaw.

“Trey will be fantastic,” Tierney said. “He has been ready to be a head coach for several years now. He has a great playing background as a football and baseball player. He’s very well versed in the passing game. I don’t know anyone that has met Trey that doesn’t like him.”

Stepping into the void is Trey Willie.

There is no doubt that Willie is richly qualified and fully prepared for the task at hand.

Willie served as quarterbacks coach and offensive coordinator under Tierney, working under Tierney for nine seasons. Willie is a former quarterback, himself, playing at Loranger and Southeastern Louisiana. Willie previously worked at Amite as well, coaching baseball.

“It’s been a good transition,” Willie said. “Hank has laid the blueprint for us. He’s been a great mentor. That’s made it a little bit easier for us.”

Senior Nolan Tribble (6-1, 175) is back to run the offense after an outstanding junior season.

“Nolan is very accurate and he has learned what we want to do so well,” Willie said. “He is sharper with his reads this year. He puts the ball in the right spots. He is a natural thrower.”

That is certainly the good news.

The bad news is that 18 starters graduated from last season’s team, including many who are playing on the next level. Those include Jacoby Mathews, Kody Finley, Brayden Johnson, Amarion Walker and Damontrel Osby, among others.

Willie has a good running back to lean on senior Patrick Lebranch (5-9, 180), a transfer from John Curtis Christian.

“Patrick just fell in our lap,” Willie said. “He is a very talented player. He can catch the ball out of the backfield and is a physical runner. You can tell he came from a great program.”

Another excellent athlete to watch is junior Bishop Davis (5-11, 160).

“Bishop will play all over for us,” Willie said. “We will use him everywhere on the field.”

“It is all about game reps for them,” Willie said. “Once we get a couple of games in, they will be advanced and they should progress. Both can high-point the ball and have good hands and both are very competitive.”

Up front, the Green Wave could be solid.

“We have six seniors and three juniors who will rotate up front,” Willie said. “While we don’t have great experience, it should be one of our strengths this year.”

Finding others to contribute is the key.

“We have just three returning starters on offense,” Willie said. “The guys we lost scored over 100 touchdowns for us. It is a challenge, to be certain. We have to develop younger, inexperienced players.”

“We have our defensive coordinator returning in Timmy Walters,” Willie said. “He is a brilliant coach, someone I will lean on heavily. Our defensive line is very deep, with up to seven guys who can play and play well. We are tough inside and Smith and Sapp can get after the passer.”

The secondary is an open competition among five players.

“We are simply inexperienced in the secondary,” Willie said. “We have some talented juniors and seniors who just haven’t played with the talent we had here last year.

The schedule opens on the road at Walker on Sept. 2, followed by home games with Dutchtown and St. Thomas Aquinas.

“Coach Mahaffey does a good job at Walker and Dutchtown is very good year in and year out,” Willie said. “St. Thomas Aquinas is a lower classification team but talented.”

District 6-5A play opens on Sept. 23 at Covington.

After hosting Northshore, the Green Wave travel to Mandeville. A pair of home games with Slidell and Fontainebleau follow. Week nine has Ponchatoula at St. Paul’s before the Green Wave host rival Hammond in week 10.

“I think we’re all around the same,” Willie said. “On every given Friday, any team can beat you. Last year, we had some talented guys who made it look a little bit easier. It will be a dogfight every week.”

Willie sees nothing but tough games in the league.

“Covington returns a bunch of seniors,” Willie said. “Coach (Craig) Jones comes from Lakeshore to Mandeville and he is good.. St. Paul’s is St. Paul’s, physical and well coached. Malter Scobel is a great defensive mind at Slidell. Northshore is much improved. Hammond has one of the best players in the league.”

The defense will have to carry a young offense early on. If the offense, led by Tribble, can mature quickly, Ponchatoula will compete well again in district play.

“I tell our kids all the time it depends on how hard you want to work,” Willie said. “If you want to live on last year, you will be an average team. If you work hard, great things can happen. I believe we can contend and compete with the better teams in our league and continue making long runs in the playoffs.”