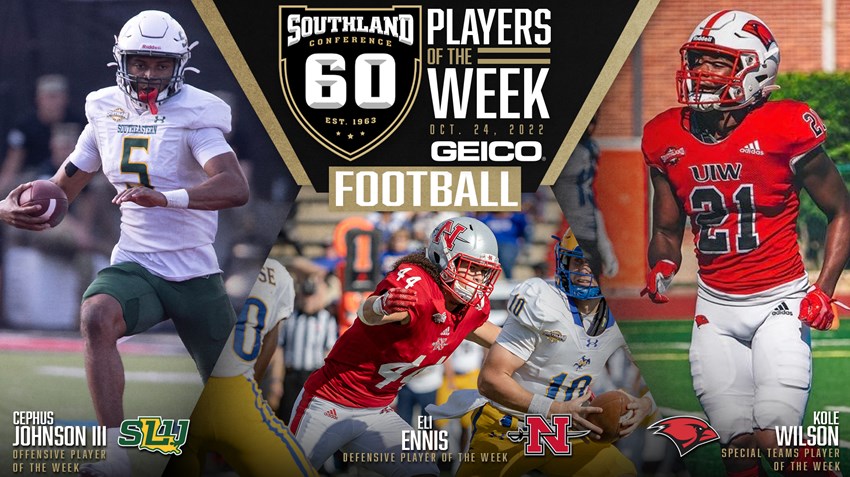 Offensive Player of the Week: Cephus Johnson III, Southeastern – QB – Sr. – Mobile, Ala. (Davidson HS)
Johnson III wins his second Southland Player of the Week award this season after he engineered a Southeastern offense that finished with 459 yards and controlled the ball for over 41 minutes in a 31-14 victory at Jacksonville State, which is in the midst of a transition to FBS. Johnson rushed for a team-high 91 yards and also threw a pair of touchdowns in the win. He completed 10-of-13 passes for 76 yards.
Honorable Mention: Deonta McMahon, McNeese.

Defensive Player of the Week: Eli Ennis, Nicholls – LB – Fr. – Ohatchee, Ala. (Ohatchee HS)
Ennis had a game-high 11 tackles and none bigger than his stop on 4th-and-1 to ultimately secure the win for the Colonels. Ennis started his day by blowing up a toss in the backfield for a forced fumble, then added his first career sack. With the Colonels nursing a five-point lead late in the game, Ennis was able to stop the Southland’s leading rusher Deonta McMahon for no gain on the fourth-down try. He finished the day with 2.0 TFLs and a quarterback hurry.
Honorable Mention: Herman Christophe, Southeastern.

Special Teams Player of the Week: Kole Wilson, UIW – RS – Fr. – Katy, Texas (Paetow HS)
Wilson had a stellar game for the Cardinals, returning two punts for touchdowns to become the UIW record holder for single-game, season, and career punt returns for scores. Both touchdowns came on 48-yard returns as he totaled 179 yards on seven returns in the Cardinals’ non-conference win over Faulkner. His total punt return yardage is the second-highest single game total in Southland history, the highest single-game total in FCS this season, and most in an FCS game since 2018.