DALLAS – Tulane University quarterback Michael Pratt threw for 234 yards and tied a career high with three touchdowns, but it was not enough, as the Green Wave suffered a 55-26 setback Thursday night at Gerald Ford Stadium.

Tulane suffered its seventh straight loss to the Mustangs. The loss also served as the Green Wave’s fifth straight this season, marking the first time Tulane has suffered five straight losses since the 2016 campaign.

As a team, Tulane was outgained 612-428. The Green Wave win the rushing battle, as they totaled 194 yards on the ground. Tulane’s 194 rushing output was the Green Wave’s second-highest total on the ground this season and its highest league play this year.

Redshirt freshman Tyjae Spears led the way for the Green Wave with a season-high 85 yards rushing. He also found the endzone for his team-best third rushing touchdown of the season.

Tulane’s air attack also proved to be effective, as Pratt completed passes to eight different receivers. Junior Shae Wyatt led the team for the second straight week in receptions, as he hauled in four catches for 42 yards. Redshirt sophomore Jha’Quan Jackson also chipped in offensively with a career-high 93 yards receiving.

Defensively for Tulane, senior JoJo Dorceus tallied a sack. He became just the second player all season to sack SMU quarterback Tanner Mordecai. In addition, linebacker Nick Anderson returned to the lineup for the first time since Tulane’s trip to Ole Miss and recorded a team-best 11 tackles.

SMU scored on each of its first five possessions to open up a 31-7 lead. The Green Wave did fight back, as it outscored the Mustangs 12-7 in the third quarter and trailed 38-19, heading into the fourth quarter.

Tulane was able to trim SMU’s lead to 15 midway through the fourth quarter, but it did not get any closer, as the Mustangs went on to score touchdowns on each of their final two drives.

Tulane returns to action on Saturday, as it welcomes No. 2-ranked Cincinnati to Yulman Stadium. The two teams will kickoff at 11 a.m. CT.

TEAM NOTES
• Tulane’s matchup with SMU marked the 28th all-time meeting between the two teams.
• With the loss, Tulane fell to 15-13 all-time against SMU.
• The Green Wave’s setback marked the first time since 2017 that Tulane has lost five straight games.
• The Green Wave found themselves in a 31-7 deficit at the end of the first half. The Green Wave scored on their first possession of the first half to cut SMU’s lead to 31-13, but that was as close as the Green Wave would get for the remainder of the game.
• Tulane has now dropped seven straight games to SMU.
• As a team, Tulane was outgained 612-428. Tulane did hold a 287-212 advantage in total yards in the second half.
• Kevin Henry, Jeffery Johnson, Michael Pratt and Dorian Williams served as the team captains.
• Tulane linebacker Nick Anderson carried the Wave of Change flag and Green Wave quarterback Sincere Haynesworth carried the No. 18 flag in honor of former Tulane student-athlete Devon Walker.
• With the loss, Tulane head coach Willie Fritz moved to 223-113-1 all-time.

DEFENSIVE NOTES
• Defensive starters for the Green Wave were DL JoJo Dorceus, DL Jeffery Johnson, DL Eric Hicks, DL Darius Hodges, LB Kevin Henry, LB Marvin Moody, DB Ajani Kerr, DB Jadon Canady, DB Jaylon Monroe, DB Macon Clark and DB Derrion Rakestraw.
• Johnson’s start was the 39th of his career which is the most of any player on the defense.
• Tulane outgained SMU 180-100 in the third quarter and held the Mustangs to just seven points.
• Junior Nick Anderson returned to the lineup and led the team with 11.0 tackles.
• Senior JoJo Dorceus picked up a sack. The sack allowed by SMU is just the second allowed by the Mustangs all season.
• For just the third time this season, Tulane failed to create a defensive turnover. 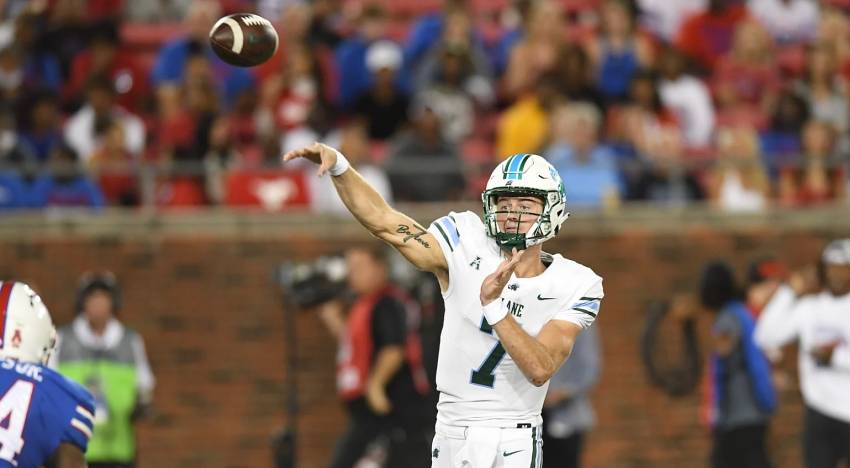 The page turns to a new chapter but the song remained the same for Tulane and its already forgettable 2021 football season Thursday night in Dallas.