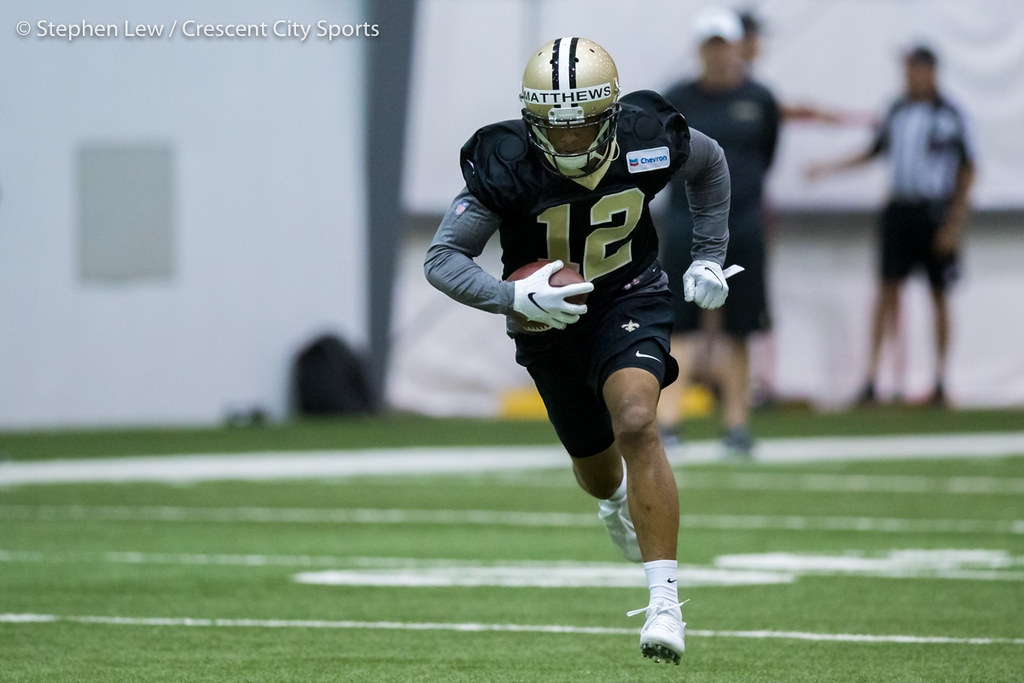 At the New Orleans Saints minicamp practices this week, 97 players participated. That’s seven over the 90-man limit because the coaches and front office are still seeking the best possible collection of talent to bring into training camp.

There will be cuts but the Saints are pulling out all the stops to add quality depth to their training camp roster. Even a rugby star Tristan Blewett, a NOLA Gold player who had never put on a football helmet until the first camp practice, was given a chance to shine. The 22-year old from South Africa is the longest of long shots to make it on the Saints roster even as a practice squad player but NFL teams leave no stone unturned in search of talent.

Overall, New Orleans has a deep and impressive roster. However, one position at which the Saints need depth is wide receiver. The latest beneficiary of that search is veteran Rishard Matthews, who was successful in earning a contract after his minicamp tryout.

After proven star Michael Thomas, what do the Saints have to work with at wideout? Who is the second, third and fourth wide receiver for this time?

The coaches are surely hoping former third round selection Tre’Quan Smith will step up his game and be that guy. The UCF product showed flashes last season but dropped off greatly late in the season. He will have to show more consistency.

Ted Ginn looks like the guy who will see the most snaps outside of Thomas but he is 34 years old. His blazing speed is still there, however.

Among other returnees, Austin Carr is a third year player from Northwestern who is super smart if not overly talented physically. He has football savvy and always lines up in the right place and rarely makes a mental mistake but lacks the physical tools Tre’Quan Smith has.

Keith Kirkwood, entering his a second year out of Temple, adds good size at 6-foot-3, 210 pounds. He made some plays last season.

As for a potential surprise, there has been praise from the media for former Rummel High School wide out Cyrie Grayson. He attended LSU as a track sprinter and did not play football. His blazing speed has been noticed in the offseason practices, but his best bet would be to end up on the practice squad.

Others who has flashed among receivers in the fold are Emmanuel Butler from Northern Arizona and Simmie Cobbs (6-3 220), a physical receiver out of Indiana who was cut by the Redskins last season. There is still some hope for Cam Meredith, the restricted free agent picked up last season from the Bears. However, his knee injury lingers, and he missed all the minicamp. Counting on him at this point is not something I believe the Saints are inclined to do but he cannot be counted out just yet.

As for the 2019 draft class, I still think second round pick Eric McCoy will be the starting center. His time with the first unit in minicamp is telling. You can’t learn much from workouts without pads but he has the talent.

A player who has made plays this week in the practices, according Saints head coach Payton, is fourth round selection Chauncey Gardner-Johnson. Payton says he can line up at safety, nickel corner and even as an outside corner if needed. That kind of versatility in an NFL secondary is invaluable.

Round six selection Saquan Hampton, the safety out of Rutgers, looks like he will have to make it on special teams.

I like seventh round pick Alize’ Mack (6-4, 250), a big man with fine speed in the 4.6 range and more than capable hands at the tight end spot. I had him rated the No. 8 tight end in my Draft Day Report but he nearly went undrafted due to some questions about his work ethic and past academic problems. Mack can cause mismatches at the NFL level.

The other New Orleans seventh round pick, Idaho’s Kaden Elliss, has lined up at Mike Linebacker in camp, but the talk is that he is versatile enough to play several positions. He will need to shine on special teams to ensure his spot on the active roster at a position where the Saints have not been this stable and deep since the Jim Mora era.

The Saints really need to improve when it comes to returning punts and kicks, and veteran free agent return specialist Marcus Sherels from the Vikings should really help. But don’t be surprised if he is pressed by a rookie free agent, Assumption College wide receiver Deonte Harris.