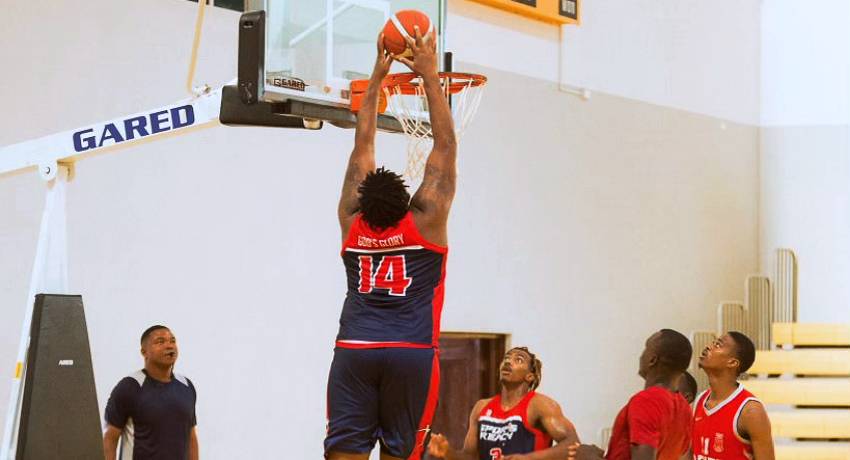 NATCHITOCHES – Northwestern State center Larry Owens will be a focal point as the only five-year player in the Demons’ program, and Owens got to test out his leadership skills on a recent basketball trip to Belize.

Owens entrenched himself as a leader on a 10-man basketball roster through Sports Reach, a Christian group that put together athletics trips across the globe.

“It was my first time outside of the United States, and the experience was wonderful getting to know the other nine guys,” said Owens, who added that players came from all three NCAA levels as well as NAIA. “We still keep in touch with each other.

“It was tough at our first practice in Elite Camp because nobody was talking. I said we’ve got to talk. And after two days of me telling them to talk, talk, talk, we started gelling and connecting. That carried into the games in Belize, and everybody started having fun and playing better.”

Sports Reach won all five of its games, but the benefit reaches far beyond victories on the court.

Aside from seeing competition outside of the NSU program, Owens morphed into a guidepost for the group.

“Larry spent basically three weeks at the training camp and in Belize, and it’s a great benefit for him to meet other people and take on that leadership role,” said NSU coach Mike McConathy. “I think it’s helped him grow, and hopefully it will carry over to his own team.

“Anytime you can experience success, it’s breeds more success. Some might ask if the competition was up to this level, but if a young man or young lady goes out and scores and rebounds and plays well, the confidence factor is enormous.”

Owens has already established himself as a leader on a roster with six newcomers, including four transferring from other colleges.

NSU athletics trainer Zachery Standiford served as the team’s daily medical presence, and he said Owens ramped up his leadership abilities starting in July with the newcomers’ arrival.

“I’ve seen him grow so much as a leader, and he’s more willing to take guys under his wing,” Standiford said. “People want to hear a different voice, and he’s a good voice to listen to.

“He’s been through it all in five years of Division I basketball, and he was one of the better in Belize, so he was a good leader for the group and the team.”

Owens thrust himself into a full-time starting role this past season, averaging seven points and four rebounds as the 6-foot-7, 300-pound center solidified his role on the team.

The Monroe native said he already can sense the new NSU group forming tighter bonds than past teams, which garnered consecutive No. 4 seeds and won a game in each of the past two Southland Conference Tournaments.

“We feel like we’ve been doing a pretty good job of getting the new guys involved, and we’ve got to connect more and be more of a team,” Owens said. “We were a team last year and did pretty good, but off the court, we weren’t as much of a team.

“It takes somebody stepping up and being a leader. Myself and other seniors like LaTerrance Reed and Brian White are doing that.”

Basketball wasn’t the only activity in Belize.

The group visited Mayan ruins and ziplined through the jungle in between practices and games.

“It was fun,” Owens said. “We also had team time where we talked about the Lord and told our own stories.

“I got to know the guys well, and I got to know (Standiford) a lot better, too. That was my favorite part. You open your eyes over there because the people don’t have much. All they have is basketball and volleyball, and you see their struggle. Once they finish high school, they have to find a way. It made me realize, ‘Man, we’ve got it easy where we’re from.’ When they do find jobs, they’re usually working for three dollars an hour, and we might make 12 or 13 dollars over here. It’s something that sticks with you.”

Owens and the Demons open the season Nov. 6 at Oklahoma and Nov. 7 at Tulsa before opening at home with Champion Christian on Nov. 13.