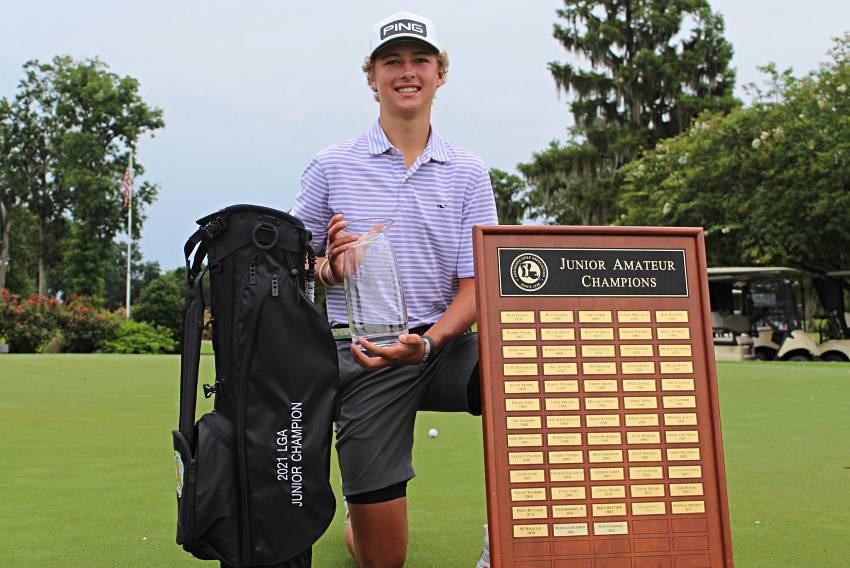 It was a memorable playing of the 64th Louisiana Junior Amateur Championship at Ellendale Country Club. There were weather delays each day, but the entire field was able to complete 36 holes through Thursday evening, setting up for the final round on Friday.

Play began at 7 a.m. but another severe storm blew through the Houma area just after 9 and dumped more rain on a golf course that has seen over 30 inches of rain in the previous month alone, along with rain almost every day thus far in July leading up to this Championship.

Play was suspended at 9:14 and would not resume due to unplayable conditions. As a result, the Committee shortened the Championship to 36 holes, and Kale Fontenot of Lafayette was declared Champion. Fontenot shot a 67 in the first round and carded a 68 in the second round to finish the Championship at nine-under par 135.

Boyd Owens of Baton Rouge finished runner-up at eight-under par 136, while Holden Webb of Shreveport and Jay Mendell of Lafayette tied for third place at five-under par 139. This is Fontenot’s first LGA Junior Amateur Championship, and in addition to the Championship crystal trophy, he received the “Past Champions’ Award” in the form of a $400 gift certificate that may be utilized in the Golf Shop at Ellendale Country Club.

Fontenot will have his name engraved on a beautiful plaque that honors each of the past LGA Junior Amateur Champions dating back to 1958, and it will be displayed at his home club, Oakbourne Country Club, until the 2022 Championship.

“It feels good to be competing against the best kids in the state,” said Fontenot.

The top-5 finishers are exempt into the 103rd Louisiana Amateur Championship to be conducted at TPC Louisiana, June 9-12, 2022. Other AJGA Performance Based Entry Stars were awarded to the boys as follows: Top 5 (12 Performance Stars), Top 10 (8 Stars), Top 15 (4 Stars). Rounding out the Top 10 to finish at even par or better are: