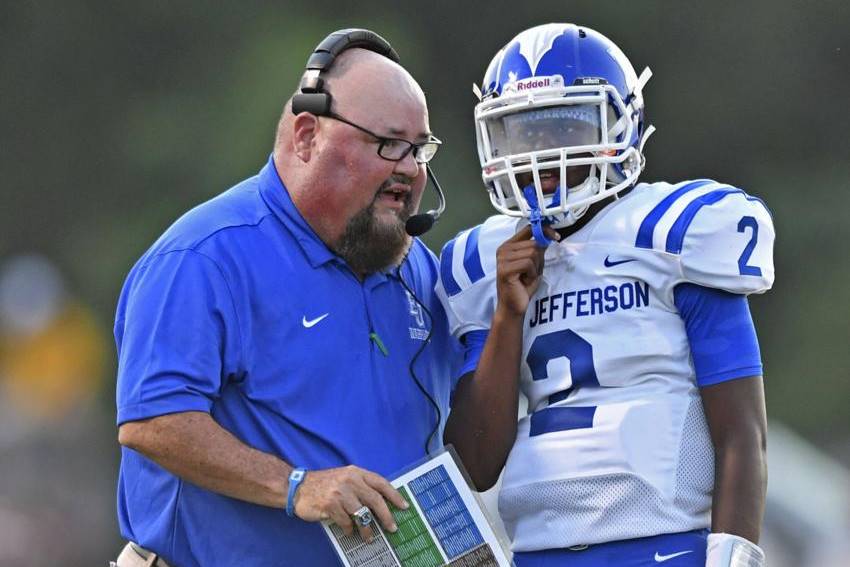 Since taking over the East Jefferson program five years ago, Frank Allelo has presided over a changing of the guard with some outstanding veteran coaches stepping away or retiring and a new staff coming in.

While it has not been easy, change is inevitable.

“The position we are finally in is that we have always fought numbers with players compared to the better programs but the players we have are solid,” Allelo said. “We have players that look the part. We have a good group of seniors and a massive group of juniors.

“It was tough to make staff changes but we had to do so. The addition of Chris Klock as defensive coordinator is huge for us. We did move on from 100 years of coaching experience, which was not easy.”

The process of building a consistent winner has been painstaking but consistent.

The Warriors were 3-4 a year ago, 3-2 in District 8-5A and lost in the opening round of the playoffs to Lafayette.

Allelo’s traditional option-style offense has given way to an Air-Raid attack.

The offense must replace a pair of talented players in Jermaine Guillard and Brian Shaw, who have graduated.

There is a good base of talent returning, including six starters.

That includes senior quarterback Arthur Oliver, who completed 112-of-217 passes for 1,682 yards and 22 touchdowns with 10 interceptions a year ago. The 6-foot, 165 pounder rushed 89 times for 461 yards and three scores.

“Arthur has improved so dramatically with his throwing,” Allelo said. “He was good last year. He is better this year in all aspects. He has bought in. He studies the playbook daily. He always has questions and recommendations. The checks are through him. They used to go through me. He and the receivers are on the same page. He is a great leader.”

“We lost two senior running backs last year,” Allelo said. “Lee is a good athlete, really a fifth receiver. We only have a handful of runs. We will not run it that much. Arthur is the biggest part of our running game.”

“We are eight or nine deep at the receiver spot,” Allelo said. “We have a phenomenal group of young players who will figure prominently in the future. We have a good group. None are stars but they are a really good group. Tre got hurt last year. He is the field-stretcher of the group. He is our fastest player. Darien started some last year. Peyton has been with us for two years and he’s come around really well. Herbert is solid.”

Freshman Dorian Hollins (6-4, 183) has a chance to be a special talent on the outside.

“They are a little undersized but for what we are doing, they fit well,” Allelo said. “Jackson and Cruz are very athletic. They could play defensive line with their ability. They can pass block. We have an incoming freshman in Washington who has good feet and is a really good student. LeRay is out biggest player. Darnell is a returning starter. Depth is an issue.”

“I am excited about our defense as a whole,” Allelo said.

“Fisher is a four-year player, a three-year starter,” Allelo said. “He tore his labrum in the playoff game last year. We just got him back in full. Evans is a two-year starter. Bowman can play inside or outside. Jason Guillard can play for us as well. Aguilar is a freshman with phenomenal potential. He has a chance to be special. We have real depth up front.”

“Talbot transferred from John Curtis but could not play last year,” Allelo said. “He is legitimate, very good. Our inside linebackers are very good. Atkins returns from last year. He has really grown and is still growing. Dixon started at strong safety last year. Pons also transferred from Curtis and he is 100 miles an hour all the time.”

“Lee returns and he is the brother of a former player in Isaiah Lee,” Allelo said. “Jalen is solid and Kazell is another player we can count on.”

The kicker is Jonathan Dejausserand while Manganello handles punting duties.

The schedule opens on Sept. 3 at Joe Brown Stadium against Livingston Collegiate. The Warriors will then play seven of their final eight games at Joe Yenni Stadium on their campus.

“We only get on the bus twice and that is an advantage,” Allelo said.

Week three is the final non-district game at home against St. Helena.

District 8-5A action opens on Sept. 24 against Riverdale before the annual rivalry contest with Bonnabel. Grace King and Chalmette follow before district power John Ehret visits Joe Yenni Stadium. The only road trip is to Hoss Memtsas Stadium to take on Higgins on Oct. 28 before the regular season concludes with West Jefferson.

“Bonnabel is a huge rival,” Allelo said. “Chalmette is always a challenge. Higgins gives us trouble. Riverdale is well coached. West Jefferson is a long-time rival and the home team always seems to win. They are an improved team. Ehret is always looks like the favorite, as always.”

Allelo is confident in what may emerge in 2021 for the Warriors.

“It is a different, positive attitude and these kids cannot get enough,” Allelo said. “There is a different feel and it good. We have young men who are devoted and want to be successful and I am excited about it. We have an opportunity to have a pretty special year. We expect a winning season and perhaps even more.”