Football Preview: Archbishop Shaw on the road to respectability, winning 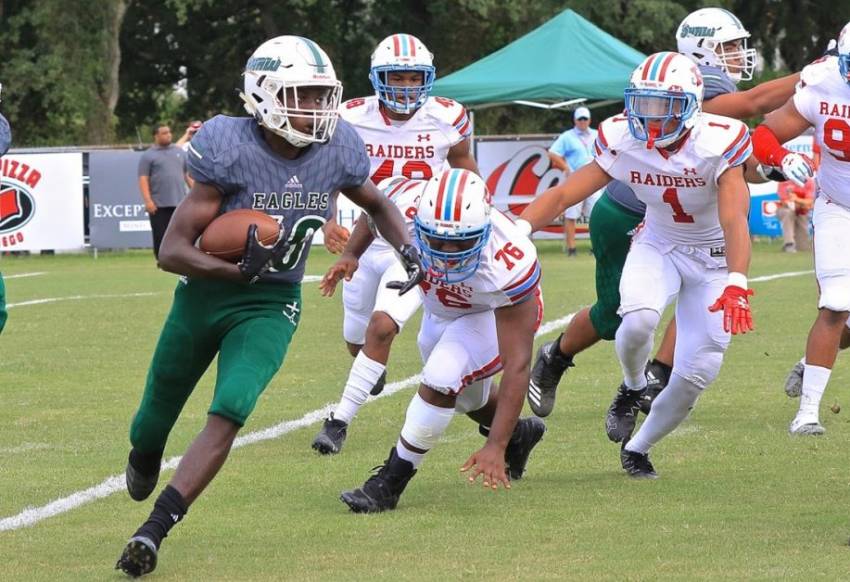 The football program of Archbishop Shaw is filled with great successes, including a state championship in 1987 and state title game appearances in 1988, 1997, 2000, 2006, 2007 and 2008 under legendary coach Hank Tierney and former Eagles star Scott Bairnsfather.

In recent years, the Eagles have struggled on the gridiron.

As enrollment decreased, the difficulty of opposition increased as Shaw has consistently elected to play up to Class 5A status in the Catholic League.

The discussion of what to do by 2022 remains regarding whether Shaw should remain in 5A (Division I) or reconsider and play down to its enrollment classification.

The result of contributing factors is that Shaw has not won a district game since 2015.

Bairnsfather departed as head coach after the 2016 season.

Former Eagles star Tommy Connors took over the Eagles program in 2017 and he is set to embark on his fifth season at the helm.

While the process to rebuild the once proud program has been painstaking, the pain is on the cusp of becoming gain.

Shaw was respectable in an abbreviated 2020 season, going 2-4. One of the games canceled due to COVID 19 issues was a winnable game for the Eagles.

After his first season, Connors began starting over, playing very young players at the varsity level.

Those young players are now fully grown, veteran players with the size and ability needed to compete in one of the toughest, if not the toughest league in Louisiana.

The Eagles returns a host of players from a year ago.

Shaw returns 14 starters, including seven on each side of the football.

“We are finally at a point where we can compete in the league this year,” Connors said. “We started off well last year and immediately got shut down by COVID-19. We played Curtis with just two days of practice and played poorly and played Brother Martin with just half a week of practice.”

“Stephen is huge and he has a big arm and he has experience,” Connors said. “He can make all the throws, sideline to sideline. He can make any throw anywhere on the field. If someone gets open, he can get it to him.”

David Kency (5-8, 160) has the ability to be a difference maker. Kency won the 100-meter district championship in track.

“He has big play ability,” Connors said. “It is hard to replicate that kind of speed and you certainly cannot coach it. We have to get him the ball.

“Williams has elite speed, another guy who can flat out run and threaten any defense,” Connors said. “He was extremely productive for us a year ago and we expect him to be even better this year.”

Center Jheron Batiste is a four-year starter at center.

“That is a luxury to have a guy initiating every play with great experience,” Connors said. “We love his knowledge of the game and toughness.”

Another strength will be the bookend tackles for the Eagles.

“Those two guys have very bright futures and they got good experience as freshmen,” Connors said. “They have the kind of size you really desire for the position and both have gotten stronger and smarter.”

The Shaw defense returns quite a bit of experience, including a two-way performer up front.

“Francis will play up front on defense as well,” Connors said. “He will be counted on heavily. Senior Jason Bush (6-1, 300) is our returning nose guard, a returning starter. He can be very disruptive. We have length at the end spot in junior Ronald Allen (6-3) and sophomore Jaden Scott (6-3), both of whom have very good futures.”

Junior defensive back Michael Newton (5-11, 180) is outstanding. Newton had 48 tackles including two sacks, four forced fumbles, two interceptions and a fumble recovery a year ago. Josh Smallwood returns as a good cover corner.

“We have some position battles at safety but we really like Newton and Smallwood,” Connors said. “A lot of it will come down to hard work and you want to see a clear difference in players emerging.”

While Shaw is much improved, will the record reflect that this season?

That may be hard to determine, based on the difficulty of the schedule.

“All three are good, talented teams,” Connors said. “St. Charles Catholic went to the title game last year. Ehret won its league and has been to a state title game recently. Landry has been good for a decade and won a state title. We are excited about it and want to build continuity and prepare for district play.

Then comes the gauntlet of Catholic League, beginning at home against Holy Cross on Sept. 24 before the annual Megaphone game with Archbishop Rummel at Joe Yenni Stadium. The Eagles then host John Curtis Christian, travel to play Brother Martin, entertain Jesuit and conclude at Tad Gormley Stadium against St. Augustine on Oct. 30.

A year ago, Shaw played Jesuit to a 10-point game and lost by just five points to St. Aug.

“We played Jesuit and St. Aug very well because we have better players and we had a full week of preparation,” Connors said. “We have to be lucky this time around. We return key players who will be a positive for us and we will play some guys both ways. This is a very challenging, difficult league with good teams and good coaches. We feel like we are ready to compete now.”

Shaw has another advantage in that the stadium on campus will now have permanent lights, allowing the Eagles to play all home games on Friday night, maximizing the potential for attendance.

“It is a real nice addition to our program,” Connors said. “We love the fact that we can play at home on Friday nights and believe we will get more fans in the stands, as a result.”

It has been a long and arduous process but Shaw is getting closer to making its mark once again.