BATON ROUGE – The LSU Tigers stepped onto the field Sunday as visitors in their own stadium, facing elimination at the hands of the Florida State Seminoles.

Refusing to go quietly into that good night, they battled valiantly for 12 dramatic innings. Unfortunately for Paul Mainieri and his team, it wasn’t enough as a Drew Mendoza single to right drove in the winning run to give FSU a 5-4 win to close out a series sweep and its 23rd trip to the College World Series.

Devin Fontenot (5-4) was the hard luck loser. He pitched 6 1/3 innings of relief, allowing one run while giving up two hits. He struck out 11 Seminole batters.

After stumbling in Saturday’s 6-4 loss, LSU’s bullpen kept the Tigers in the game as long as they could, but the offense was stymied by a lack of timely hitting and some mental errors.

The Seminoles were the ones who got off to the fast start this time. In the bottom of the second, starter Landon Marceaux began the inning by walking FSU’s Robby Martin. Centerfielder JC Flowers followed with a bunt towards third. Marceaux slid on the grass just enough to allow Flowers to reach base.

Carter Smith’s single loaded the bases for Florida State, setting them up for a big inning.

First, Nander De Sedas grounded out to first. Robby Martin attempted to score on the play from third, but Cade Beloso made a great throw to the plate that should have nailed Martin. Instead Saul Garza could not complete the tag and FSU took a 1-0 lead.

Matt Nelson continued the attack with a single to left field that scored Flowers, extending the lead to 2-0. Then, with two outs, Mike Salvatore’s single scored Carter Smith, giving the Noles an early 3-0 lead.

Duplantis put the first crack in the wall in the top of the fourth, taking a 2-1 pitch that hovered right over the plate and sending over the right field wall for his 12th homer of the season and cutting the deficit to 3-1.

Marceaux continued to struggle in the bottom of the fourth. After giving up a one out single to Nelson, Tim Becker smacked a RBI double to left field to once again give Florida State a three run lead. He was done for the day after 3.2 innings of work. He gave up four runs (2 earned) on eight hits.

Down 4-1 in the sixth, Duplantis found himself in the center of the action once again. With Josh Smith and Giovanni DiGiacomo leading off the inning with back-to-back singles, LSU’s hit king came through with a sharp hit to left, scoring Smith and pulling the Tigers back within two runs at 4-2.

LSU was finally able to chase Van Eyk in the eigth inning. Smith led off with a double to left field. Two batters later, Duplantis strode to the plate once again. This time he stroked his own double, scoring Smith and picking up his third RBI of the game. He led all Tigers hitters, going 4-6 with three RBI and two runs scored. He finished a triple short of completing the cycle.

Van Eyk was pulled after an infield single by Daniel Cabrera. With Antonio Velez on the mound in relief and with men at the corners, Zach Watson slapped one to the shortstop that turned into an infield single. Duplantis came in to score, but Watson was thrown out trying to extend his hit into a double. Instead of two on with one out, LSU had Cabrera on third with two outs for Cade Beloso.

Beloso’s ground out ended the rally, but the Tigers had finally pulled even.

Meanwhile, Devin Fontenot was in the midst of possibly the biggest performance of his career. After entering the game with two out in the bottom of the sixth, the sophomore righty was electric.

He held the Seminoles hitless until the 12th. After striking out Nico Baldor to start the inning, Salvatore got the first hit off of him with a single to center. Fontenot then threw a wild pitch that allowed Baldor to move into scoring position.

Fontenot was almost out of the jam after getting Reese Alber swinging on only four pitches.

The count was even at 2-2 and Fontenot tried to go down and away to the lefty Mendoza. It caught too much of the plate though, and Mendoza hit a strong line drive to right that allowed Salvatore to score easily from second, surrounded by a throng of golden-clad Seminoles.

As the Tigers fell to their knees, exhausted mentally and physically, the crowd stood and applauded. Even in defeat, they had earned their moment of gratitude.

This was a tremendous season for the Tigers, though they came up short in reaching their goal of bringing a seventh national championship back to Baton Rouge.

In the short term, we will remember the defeat. But as we look back, we should also remember the names Duplantis, Smith, Garza, Marceaux and the rest. LSU was counted out by fans, and by the media at different points of the season.

The Tigers finished as one of the best 16 teams in the nation.

That is something about which LSU should be proud. 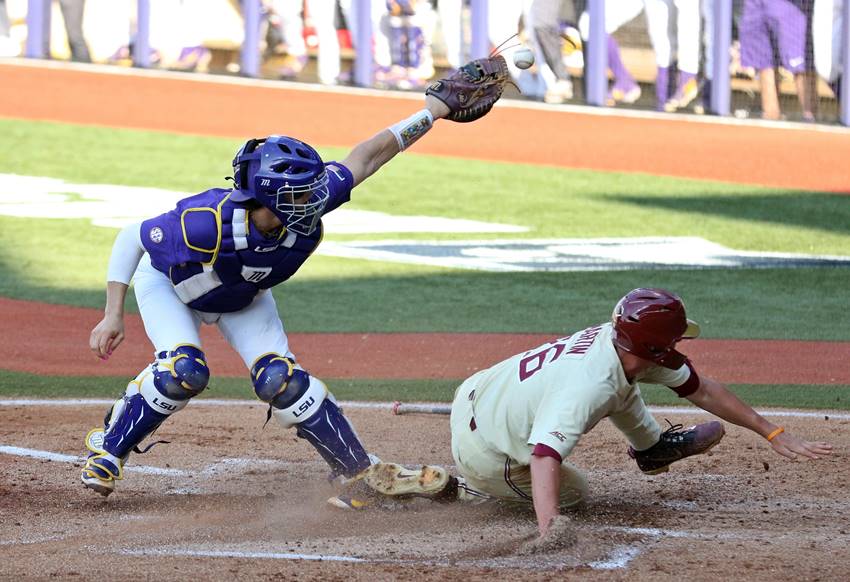 A roller coaster season for the Tigers came to an end as the Florida State Seminoles slammed the breaks on the home team in extra innings Sunday at Alex Box Stadium.