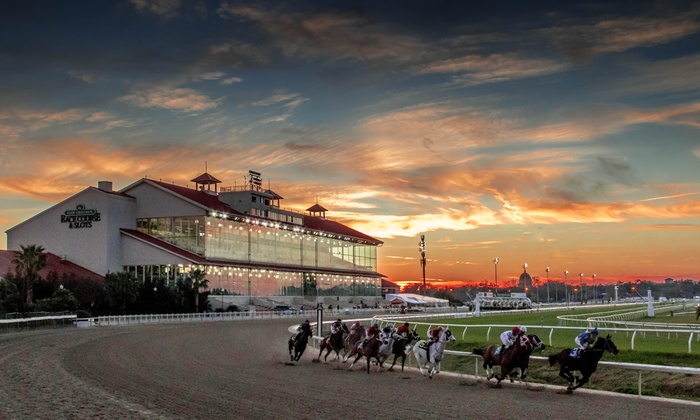 NEW ORLEANS – Fair Grounds Race Course & Slots has announced that 51 stakes worth a combined $7.055 million will be offered during the upcoming 76-day 2020-21 Thoroughbred racing season, which is set to begin Thanksgiving Day, Thursday, November 26.

“We are proud to once again continue our growth and support of the Thoroughbred racing industry with our purse allocations and this diverse and dynamic stakes schedule” said Fair Grounds Race Course & Slots president Doug Shipley. “We look forward to our 149th racing season and the continuation of bringing many of the best horsemen and jockeys from around the world to enjoy the high caliber racing at Fair Grounds in New Orleans.”

The “Louisiana Derby Day” card on March 20 will feature eight stakes worth a total of $2.425 million, including the 108th running of the Grade II $1 million Twinspires.com Louisiana Derby for 3-year-olds.

Previously run over nine furlongs on dirt, the distance of Louisiana Derby was extended to 1 3/16ths miles last season. The third and final local prep on the Road to the Grade I $3 million Kentucky Derby Presented by Woodford Reserve, the race is worth 100-40-20-10 points to the top four finishers. Run at 1 1/16 miles, the 53rd running of the Grade II $400,000 Twinspires.com Fair Grounds Oaks for 3-year-old fillies offers the same number of points en route to the Grade I $1.25 million Longines Kentucky Oaks.

“Lengthening the distances of all three of our Road to the Derby races proved to be quite popular with the horsemen,” said Fair Grounds racing secretary Scott Jones. “The Lecomte drew 14 entries, the Risen Star had 23 entries and was split into two divisions, and the Louisiana Derby had an overflow field. Our progressive schedule of 3-year-old races for both the boys and girls gives horsemen a great opportunity to develop their horses and compete for excellent purses.”

A pair of nine furlong, high-impact stakes for older horses are also scheduled on the Louisiana Derby Day program – the Grade II $400,000 New Orleans Classic and the Grade II $300,000 Muniz Memorial Stakes, to be run over the Stall-Wilson Turf Course. In addition, four undercard stakes are slated for the lucrative card, including the $100,000 Tom Benson Memorial for older fillies and mares at 1 1/16 miles on grass and a trio of Louisiana-bred events – the $75,000 Costa Rising Stakes, a 5½-furlong turf sprint, the $75,000 Crescent City Derby for 3-year-old males at 1 1/16 miles and the $75,000 Crescent City Oaks for females at 1 mile and 70 yards.

On January 16, the “Road to the Derby Kickoff Day presented by Hotel Monteleone” features a pair of key 3-year-old events — the Grade III $200,000 Lecomte Stakes, which was extended from a mile to 1 1/16 miles last season, and the $150,000 Silverbulletday Stakes for fillies at 1 mile and 70 yards. The top four finishers in each race receive 10-4-2-1 points on the Road to the Kentucky Derby and Oaks respectively.

On February 13, “Louisiana Derby Preview Day presented by Lamarque Ford-Lincoln” features a pair of key 3-year-old stakes — the Grade II $400,000 Risen Star Stakes presented by Lamarque Ford-Lincoln, which was extended from 1 1/16 to 1 1/8 miles last season, and the Grade II $300,000 Rachel Alexandra Stakes presented by Fasig-Tipton, for fillies to be contested over 1 1/16 miles. The top four finishers receive 50-20-10-5 points on the Road to the Kentucky Derby and Oaks respectively.

The Rachel Alexandra has produced the last two of the last three Kentucky Oaks winners in Monomoy Girl and Serengeti Empress and 2014 victress Untapable also took down the Run for the Lilies. Our 2020 third place finisher Swiss Skydiver has gone on to win five graded stakes, including the Alabama (G1) in advance of a runner-up finish in in the Oaks, and the Preakness (G1) against the boys. With such a stellar history of recent participants, Fair Grounds remains hopeful the Rachel Alexandra will soon achieve Grade I status is deserves.

The December 19 “Santa Super Saturday presented by Coca-Cola” card offers a six-pack of $75,000 stakes. Four of the races are for older horses — the Tenacious Stakes at 1 1/16ths miles, the Richard R. Scherer Memorial Stakes at 5 ½ furlongs on turf, the Blushing K.D. for fillies and mares at 1 1/16 miles on turf, and the Buddy Diliberto Stakes at 1 1/16 miles on turf. The other two are six furlong events for juveniles – the Sugar Bowl Stakes for the boys and the Letellier Memorial Stakes for the girls.

The purse for the opening day Thanksgiving Classic for older male sprinters has been increased $25,000 to $125,000. The $60,000 Shantel Lanerie, to be run on March 21, has been repurposed as a route race for older Louisiana-bred fillies and mares.

Fair Grounds Race Course & Slots, one of the nation’s oldest racetracks, has been in operation since 1872. Located in New Orleans, LA, Fair Grounds is owned by Churchill Downs Incorporated (NASDAQ Global Select Market: CHDN); it also operates a slot-machine gaming facility and 13 off-track betting parlors throughout southeast Louisiana. The 149th Thoroughbred Racing Season – highlighted by the 107th running of the Louisiana Derby – will run from November 26, 2020 through March 28, 2020. More information can be found online at www.FairGroundsRaceCourse.com.