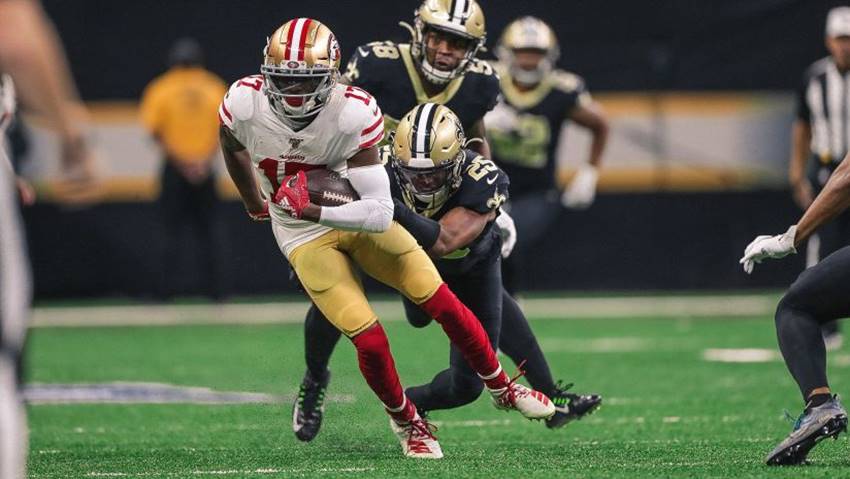 It was an absolute need.

For the New Orleans Saints, a good football team, the gap between its top wide receiver and the second leading wide receiver on the squad was the largest in the NFL in 2019.

That gap has been mitigated with the eminent signing of Emmanuel Sanders to a two-year contract.

Thomas caught an NFL record 149 passes for 1,725 yards and nine touchdowns. Ted Ginn Jr. was next up with 30 receptions, a whopping 119 behind the astronomical level of Thomas.

Ginn is nearing the end of a nice career. Tre’Quan Smith has to prove he belongs, entering his third season in the league. Smith had just 18 catches in 11 games a year ago.

While Alvin Kamara and Jared Cook will continue to play prominent roles in the short passing game for Drew Brees (and long at times for Cook), there was a glaring need for another threat on the outside.

What strikes you most about Sanders is his level of consistency.

Sanders is not great. He is good, consistently good.

Sanders has made a pair of Pro Bowls. He finally fills the gap which has existed for quite some time now, following the trade of Brandin Cooks to New England following the 2016 season.

There have been efforts in the draft (Smith), an offer sheet gamble on an injured player (Cameron Meredith) and wild card attempts (Dez Bryant, Brandon Marshall), even an ill-advised look at Antonio Brown, who turned the look-see into a circus in undue fashion.

Now, New Orleans has the authentic item, the goods, the real deal.

Sanders is one of only five receivers in the NFL with 500 yards or more over the last eight seasons.

When he has played 15 or more regular season games in a season since 2013, Sanders has 66 or more catches in each of those seven seasons.

His 42 touchdowns are an average of 4.2 per season. He has played in a pair of Super Bowls, winning one.

Sanders fills a specific need as he is very effective out of the slot position, a spot where there has been a glaring need since the departure of Willie Snead IV, who was effective. Lance Moore excelled in that spot previously.

Is there a downside for Sanders?

Perhaps that would be that he is on the downside of his career at the age of 33 and entering his 11th season in the league.

There was little evidence of that last season when Sanders caught 66 passes for 869 yards and five touchdowns while splitting time between the Broncos and 49ers.

It did not hurt that Sanders caught seven passes for 157 yards and a touchdown in a 48-46 win over the Saints in the Mercedes-Benz Superdome on Dec. 8, 2019. For good measure, Sanders threw a 35-yard touchdown pass to Raheem Mostert.

Sanders is a good player who should remain that way. An affordable two-year deal was a wise investment.

Sanders is the latest move made by a team that has been and clearly remains a contender for Super Bowl honors. Las Vegas has the 2020 New Orleans Saints as one of the top four choices to win Super Bowl LV in Tampa.

When you are a contender, you sign veteran players, not concerned about three to five years down the road but for the next year or two.

New Orleans has won 37 regular season games over the last three seasons, the most in the NFL. The Saints have won two playoff games and reached an NFC championship game. There is no denying that they have been close and are a contender.

That is why bringing back Drew Brees (41), Malcolm Jenkins (32) and Emmanuel Sanders (33) makes sense.

Now, the Saints can concentrate on drafting the best player and players available in the upcoming NFL draft, regardless of position. You can never go wrong drafting big, continuing to win up front in the offensive or defensive line. That is what has worked for the Saints in recent years in the NFC South.

You can not go wrong addressing the linebacker position, with the loss of A.J. Klein and with the injury concerns of Alex Anzalone and Kiko Alonso. You can never have enough good cornerbacks.

Finally, the addition of Sanders conjured up the memory of another player with a similar name in Saints history.

Emanuel Zanders was a very fine starting guard for the New Orleans Saints for seven seasons from 1974-80. He is a very good man.

Emmanuel Sanders is a very fine wide receiver for the New Orleans Saints. If the franchise can get two good years from him, it will have been a very good deal.