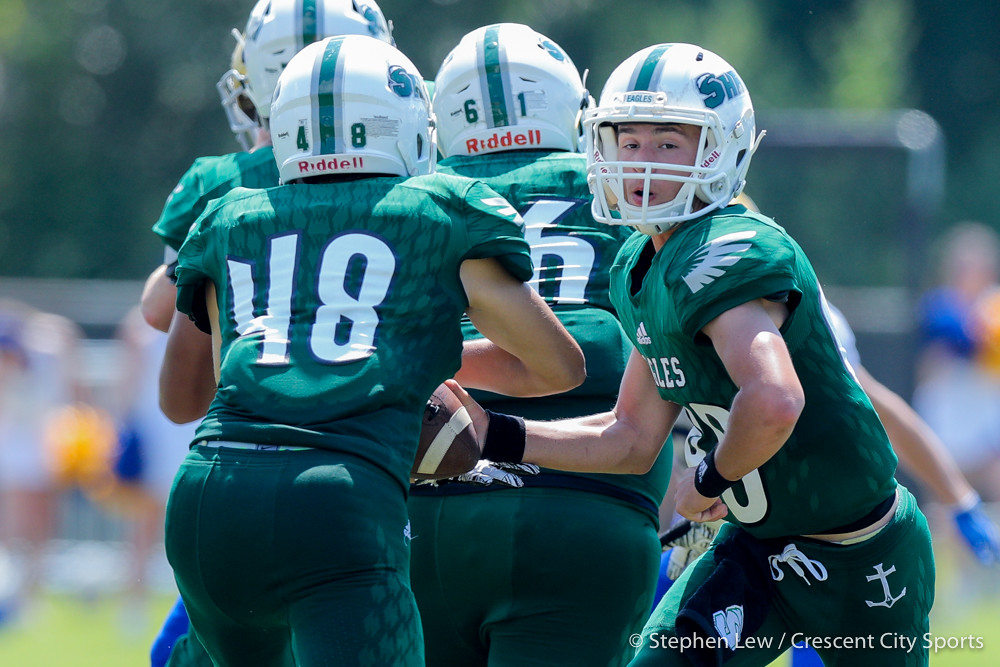 Rome was not built in a day.

It is one of the most overused axioms applied to any start-up process in any business.

In the case of Archbishop Shaw, the phrase certainly applies.

When long-time coach Scott Bairnsfather departed after the 2016 season, the once proud Eagles football team had diminished to the breaking point. Bairnsfather, a terrific coach, did a superb job at Shaw but a the diminishing number of students and football players finally caught up with Shaw. No matter how good you coach players, you must have players to win, especially at the highest level.

Former Eagle Tommy Connors has seen some of the greatness of the Archbishop Shaw program as a player as he was part of that success. In 2017, Connors accepted the very difficult challenge of trying to restore the Eagles to prominence, to fly high once again, as its new head coach.

The first season was very difficult as the Eagles went 0-11.

Connors understands what it is like to start over again.

In his freshman season as a player at Shaw in 2002, the Eagles went 0-9. By the time he was done at Shaw, the Eagles had reached the playoffs, won two postseason games and were on the cusp of reaching the Class 4A state championship game three straight times.

While Shaw does not have close to 5A enrollment, the school and its officials have elected to remain at the top level in football, Division I, to remain in the famed Catholic League of like institutions after considering dropping down to 4A status and competing in Division II in the playoffs.

The advantages are obvious. The schools in the Catholic League have similar missions and clientele. They are rivals but respectful of each other. The gates are good in virtually all sports.

The disadvantages for Shaw are obvious.

The Eagles have the lowest student enrollment of any school in the league. In fact, Jesuit has nearly 1,000 more students than Shaw, suggesting an unlevel playing field.

While the task is daunting, Connors has embraced it and is attacking it with vigor for the school he loves.

After going winless in Connors’ first season, Shaw broke through and won a pair of games a year ago, defeating Vandebilt Catholic and Salmen. The Eagles were competitive in a few others, falling by just two points to Belle Chasse and by five points to Brother Martin.

“It was progress,” Connors said. “We took care of details better. We have to have attention to detail as we grow the program and grow the talent level. I am excited about us moving forward. It is fun and exciting. We have to put guys in position to succeed but we will be very young this season.”

Connors will do it with a youthful team, including two freshmen and as many as nine sophomore starters. There are just seven seniors in the program.

“Tyler is entering his third year as a starter,” Connors said. “It is good to have experience in a key spot like quarterback. It gives you confidence that you know what you are getting from him. We are looking for more consistency.”

“We are counting on Jace to be consistent for us,” Connors said. “He understands what we are trying to do and can show others as well.”

“You will see a bunch of young players on the field, including at running back,” Connors said.

The strength of the Shaw offense should be its offensive line, which returns four of five starters.

“We have some age and experience up front,” Connors said. “That should be our strength. “We have lots of competition at the other spots. Murphy is a solid player and our center returns and that helps. It all starts up front and we should compete well at the point of attack.”

While there is experience on offense, the defense is young with two starters back, both at the end spots.

“Pate had 10 sacks last season and he is a very good player,” Connors said. “We lose Mark Smith up front and others will have to step up. Miles played for us last year as well. We are counting on them to provide leadership for a young group early on.”

That softens the blow of losing an outstanding tackle in Mark Smith and another solid tackle in Kade Cardenal.

Connors must replace a pair of good linebackers in Payton Clement and Miles Haney, who combined for over 100 tackles a year ago.

“We need players to step up to make tackles for us,” Connors said. “We feel there is potential. Payton and Miles were dependable, solid players for us. We have to create turnovers and make big plays on defense.”

The secondary loses a good player in Christian Jourdain, who led the Eagles in interceptions a year ago.

“Guidry and Newton saw action and started some last year,” Connors said. “Dorian Lewis was injured last year and it is good to have him back healthy. We expect him to be good for us.”

The kicker is Dawson Donahue while Lewis will handle punting duties.

The schedule finds the Eagles on the Westbank for its first three games.

Shaw opens at home on Sept. 6 against Higgins before the Eagles host Belle Chasse. A short trip to former home Hoss Memtsas Stadium to face West Jefferson follows before District 9-5A play opens on Sept. 27 at home against Holy Cross.

“Having your own stadium is nice and playing at home on Friday night is nice,” Connors said. “We have to be ready for week one, to start well prior to district play. There is still a lot of pride to play in a deep district from top to bottom. We are in a great league with some great competition. You really don’t want it any other way.”

The Eagles face Brother Martin at Tad Gormley in week eight before entertaining Jesuit. District play concludes at Gormley against St. Augustine on Nov. 2 before the regular season concludes against H.L. Bourgeois on Nov. 8.

“We need guys to emerge,” Connors said. “We have lots of questions but some will be answered when the season gets here. We have to convert more on third down and maintain possession. We have to be more solid overall on defense. I think we are making progress.”

Getting off to a good start is very important if Shaw is to progress beyond the two wins of a year ago. Much will depend on the young core of players Connors will rely on. The program, which has had just four coaches in 50 years, is in good hands. The construction of a new, solid program continues.

“I plan on being here for a long time and continuing that stability,” Connors said.