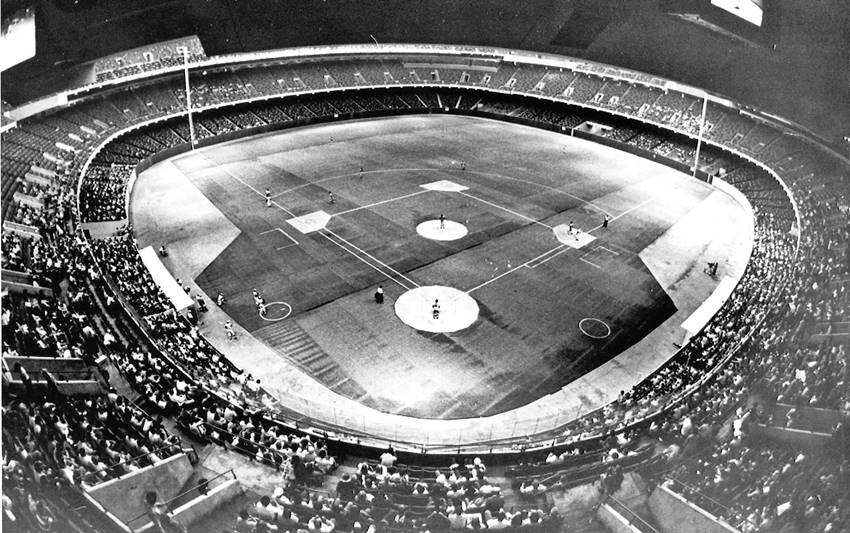 When New Orleans businessman Dave Dixon originally envisioned the Louisiana Superdome, he intended it to be a multi-sport, multi-function facility. While a new home for the NFL New Orleans Saints provided the primary impetus for building the new stadium, Dixon sold the Superdome’s stakeholders on the concept that it should ultimately host NBA and MLB teams as well.

This is great Ken! We came across a couple of baseball photos in our archive we wanted to share. pic.twitter.com/QuV7nNZODR

The first professional baseball game was played in the Superdome on April 5, 1976. Unlike with football and basketball, the Superdome didn’t have a baseball tenant when it initially opened. New Orleans had been unable to lure a big-league baseball team for the opening of the facility. Superdome officials settled for a three-game exhibition series between the Minnesota Twins and Houston Astros, but still had hopes of eventually getting a team.

From the beginning of the Superdome project, the Louisiana Superdome Baseball Commission naturally assumed it would be just a matter of time before it would land a major-league franchise in New Orleans. After all, the Astrodome in Houston had been a huge success with MLB’s Astros franchise, and the Superdome had the lure of being an even more spectacular facility. Consequently, pursuit of a professional team began well before construction of the facility began in 1971.

Major League Baseball’s most recent expansion had occurred in 1969 when it added the Kansas City Royals, Seattle Pilots, Montreal Expos, and San Diego Padres. It was believed another expansion would soon follow, and New Orleans desperately wanted to be in the mix of candidates. Of course, the other major path for obtaining a franchise was the relocation of an existing franchise. Although it had far less appeal, a third option mentioned in the Times-Picayune in late 1970 involved the concept of a joint-city team, where an existing MLB franchise would play half of its games in its home city and half of its games in the Superdome.  The Cleveland Indians were reported to have interest in the concept.

The Superdome Commission was assertive in generating interest by Major League Baseball by hosting the league’s winter meeting in New Orleans and sponsoring major-league exhibition games in the city, even before the Superdome’s construction was finished. Tad Gormley Stadium and Kirsch-Rooney Park were used as sites for exhibition games between major-league teams going north following the end of spring training. New Orleans wanted to prove it was a genuine baseball town.

In early 1974 Superdome secretary-treasurer Billy Connick predicted New Orleans would get a team, most likely a relocation of the Cleveland Indians or Baltimore Orioles. Superdome officials even went as far as reserving 21 dates for exhibition games and 52 regular-season games for the 1975 season.

However, the stadium didn’t officially open until August 6, 1975, when the New Orleans Saints played the Houston Oilers in an exhibition football game, followed by their regular NFL season schedule. The New Orleans Jazz played its first regular-season NBA game in the Superdome on October 24.

In early 1976 while the Superdome Commission was in the process of hammering out the details of a sweetheart deal for a “rent-free” lease of the facility, New Orleans was disappointed to learn that MLB had awarded its next two American League expansion franchises to Toronto and Seattle (whose original franchise moved to Milwaukee after only one season in 1969) for the 1977 season.

Consequently, the State of Louisiana cooled to the prospect of attracting a team and began focusing on other revenue-producing sources, although city officials still harbored long-term hopes to attract a relocated team. Local banker Louis Roussell said he would be willing to throw his large financial assets behind a major-league team.

The game between the Houston Astros and Minnesota Twins on April 5 was first of three-game series. It was intended to demonstrate to MLB Commissioner Bowie Kuhn New Orleans’ enthusiasm for a team. A spirited crowd of 10,073 showed up for the game, eager to see the baseball configuration the Superdome architects has envisioned. The stadium featured movable stands that are retracted for baseball, allowing for the best seats along the first base and third base lines and around home plate. The playing field had relatively short foul lines (318 feet), but a cavernous outfield.

Both clubs had sub-par seasons in 1975, as the Twins finished fourth in the AL West and the Astros were sixth in the NL Central. The Twins had a new manager in Gene Mauch, while the Astros were led by manager Bill Virdon, who had taken over the job for the last 34 games of the 1975 season.

The score of the game went back and forth for the first seven innings, eventually becoming knotted in a 4-4 tie. Carew scored the first run in the Superdome, while Astros’ catcher Cliff Johnson smacked the first home run in the second inning.

The bottom fell out on the Twins’ Vic Albury who relieved Blyleven in the top of the eighth inning. The Astros strung together eight runs in the final two innings, sending 19 batters to the plate. During that span, the Astros had five extra-base hits, led by Greg Gross’s two doubles and three RBIs. The Twins managed another score in the eighth for a final score of 12-5.

The Astros battered the Twins for 16 hits. Johnson and Gross led the Astros with three hits apiece. Steve Braun and Larry Hisle each collected three hits for the Twins. Albury took the loss, while Paul Siebert, the third of five Astros hurlers, got credit for the victory.

The Times-Picayune’s headlines the next day declared, “Superdome Passes Test.” The feedback from players, managers, and front-office officials from both sides was positive. There were a few issues with the stadium—troublesome seams in the outfield artificial turf and ceiling lights not aligned for baseball—but the conditions were acknowledged by the players as easily fixable.

Hisle said, “The turf was as good as any I’ve played on.” Johnson called the spacious centerfield area “death valley” and liked the background view for batters.

Mauch said, “This place is awesome beyond description. I don’t see any reason why it shouldn’t be a great baseball facility.” Virdon called the facility “a beautiful place. I’m sure once they play some games here they’re going to correct the little things that are wrong now.”

Twins president Calvin Griffith said, “It is just fantastic…fabulous. I can’t see any faults about it as a baseball facility.” He added, “We had gotten reports that there were some areas where you couldn’t see the entire field. There were supposed to be some spots behind home plate like that but it just ain’t so.”

It turned out Commissioner Kuhn couldn’t attend the game, but his representative John Johnson said he would turn in a favorable report to his boss.

The Superdome wound up securing a minor league team for the 1977 season, when A. Ray Smith, owner of the Triple-A affiliate of the St. Louis Cardinals, relocated from Tulsa. The former New Orleans minor-league Pelicans baseball team name was revived, and the new team played its regular-season American Association games in the Superdome. Smith was hopeful that a season of minor-league ball in the Superdome would provide momentum for an existing big-league franchise to more strongly consider a move, especially given the attractive stadium lease deal.

However, a major-league team never materialized, despite ongoing efforts to lure teams to New Orleans. In the following years, the Times-Picayune reported on preliminary discussions with Oakland, Pittsburgh, Minnesota, Montreal, and Chicago’s White Sox to move their teams to New Orleans. However, none reached a serious level of negotiation. New York Yankees owner George Steinbrenner, whose team played exhibition games in the Superdome for several years, publicly backed New Orleans’ bids for an expansion team. As late as 1988, efforts by the city to secure a team continued. At the end of the day though, New Orleans lacked a local, big-money backer who could spearhead bringing a team to the city.

Despite the efforts for nearly twenty years, the Superdome ultimately struck out getting a major league team.