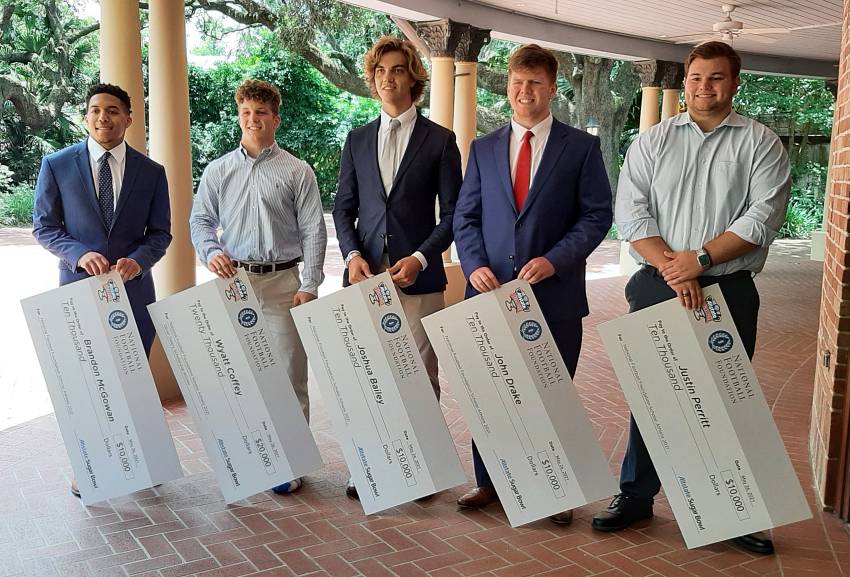 At the Audubon Tea Room in uptown New Orleans, 31 high school athletes were recognized for their outstanding achievements in academics by the Allstate Sugar Bowl Committee at the National Football Foundation 2021 Scholar Athlete Awards Luncheon.

Each of the young men excelled through their work in the classroom, production on the football field and multiple extracurriculars. Twenty-six high schools from across the metro area were represented at the event from all divisions of competition.

Roth received the Contribution to Amateur Football Award for his tenure of 24 years as the head coach of Archbishop Rummel. He is the record holder for most wins in Catholic League history with 228, along with 12 Catholic League titles and two consecutive state championships (2012 and 2013).

During his acceptance speech, Roth reminisced on how he had been in the same shoes of the athletes in attendance as he himself had been a National Football Foundation scholar athlete forty years prior.

Dickson received the Distinguished American Award for his 16 years as Tulane’s Athletic Director. During his time with the Green Wave, Hurricane Katrina brought destruction and chaos to the city of New Orleans. Dickson shined in his ability to manage and lead during such a trying time. He helped Tulane successfully gain admission into the American Athletic Conference, open a brand-new football stadium and produce numerous renovations and constructions of other athletic facilities.

In his speech, Dickson highlighted two words by which he lives, “fearless and relentless.” He noted that he prides himself on striving to live those words as a professional and encouraged the young men in the room to do the same.

Former NFL quarterback Archie Manning called out the names of each athlete that was being honored, along with a list of the accomplishments they had in their high school careers. He emphasized to the young men honored that “the true game of life is about excellence off the field.”

Four student-athletes were awarded scholarship money from the Sugar Bowl Committee for their exemplary work ethic. The quartet honored were Brandon McGowen from Isidore Newman, Joshua Bailey from Fontainebleau, John Drake from John Curtis Christian, and Justin Perritt from Northlake Christian. Each received $10,000 to go towards their college tuition. These athletes were asked to write essays that explained why they deserved to be given a scholarship and what they have had to overcome in their lives to get to where they are now.

Brandon McGowen was born with a rare internal condition that caused him to experience shortness of breath constantly. When asked how he felt to receive a scholarship he noted that he was “blessed, honored and excited.” He also explained that he did not see his condition as a hindrance but as a motivator to keep pushing himself towards success.

The biggest award of the day went to Wyatt Coffey of Archbishop Hannan, who received the Oliver Delery Scholarship, which granted him $20,000 for tuition for his work on and off the field. “I’m excited, because basically my whole college just got paid for.” Coffey was born with Poland Anomaly, a condition that causes underdeveloped pectoral muscles.

“I’ve been told that I couldn’t do a lot of things my whole life, and now I am pound for pound the strongest player in the state,” said Coffey.

NEW ORLEANS – The Allstate Sugar Bowl Chapter of the National Football Foundation/College Football Hall of Fame held its 2021 Awards Luncheon on Wednesday afternoon at the Audubon Tea Room. The highlight of the event was the announcement of five winners of college scholarships from the Allstate Sugar Bowl.

Thirty-one local high school football players were recognized for their achievements in the classroom, in the community and on the football field. The honorees were chosen from a group of nominated scholar athletes from the New Orleans area. Archie Manning, the national chairman of the National Football Foundation and College Football Hall of Fame, recognized each of the 31 student athletes at the event. From that group of 31, five were selected to receive Allstate Sugar Bowl Scholarships: four for $10,000 and one for $20,000 each. The scholarship winners were chosen based on essays submitted after being notified of their selection as scholar-athletes.

In addition to the high school honorees, two local leaders were recognized for their contributions to the community and the sport of football.

Jay Roth, the current director of athletics at Archbishop Rummel who was the Raiders’ head football coach for 24 years before retiring following the 2018 season, was presented with the Contributions to Amateur Football Award, which is given annually to an individual for his or her effort to promote the game, preserve its history and ensure its future. Roth compiled a career record of 228-62 at Rummel, directing the Raiders to two consecutive Class 5A state championships (2012 and 2013), two other trips to the finals and an unfathomable 12 Catholic League championships. Roth’s dozen Catholic League championships are the most by any coach in the 65-year history of the league that dates to 1955. He also had 10 trips to the state semifinals and seven undefeated regular seasons, including 1980, when he was the Raiders’ senior quarterback.

Rick Dickson, who served as the director of athletics at Tulane University from 2000-16, was presented with the Distinguished American Award, which is presented each year to an individual who has set the standard for a life of service to the community and has made a significant contribution to the betterment of amateur football. Dickson guided the Green Wave through some of the most tumultuous periods in its history, including the devastation of Hurricane Katrina, which nearly destroyed the university’s athletics facilities. Despite the Katrina chaos, Dickson provided leadership and coordinated the effort to rebuild the athletics program to a full complement of 16 programs. He also keyed the program’s admission to the American Athletic Conference, opened Yulman Stadium and built or renovated numerous other facilities. Under Dickson’s watch, Tulane teams won 41 C-USA titles and advanced to NCAA postseason play 36 times. This includes two bowl games, two College World Series trips and four runs to the NCAA Women’s Golf Championships. He is currently the Director of Athletics at the University of Tulsa.

The New Orleans Chapter of the National Football Foundation was established in 1971. The Sugar Bowl took over sponsorship of the chapter in 2000 and since then it has recognized nearly 500 student-athletes while distributing over $500,000 in scholarship money.