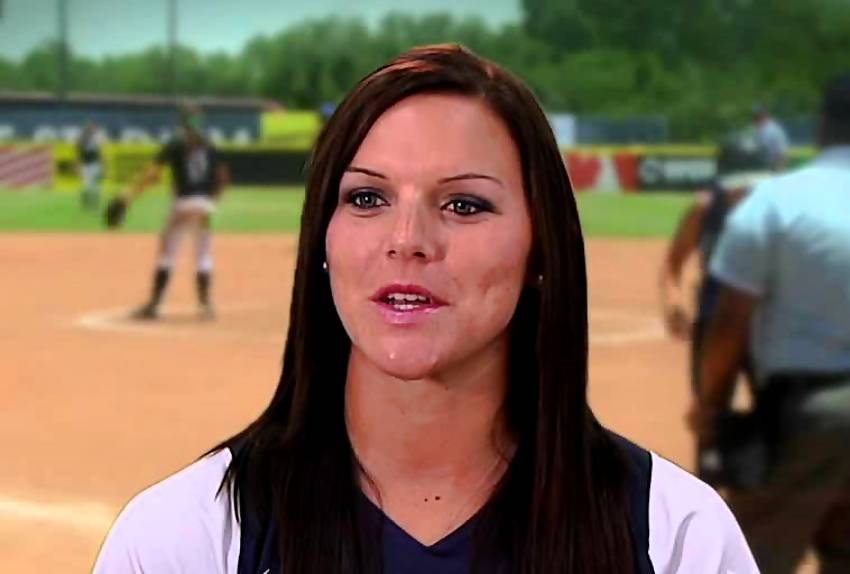 For someone who wasn’t highly recruited out of Mount Carmel Academy in New Orleans, Christi Orgeron did all right for herself.

Two-time All-American … twice the Sun Belt Conference softball Player of the Year, not to mention being named the league’s Female Student-Athlete of the Year in all sports in both 2011 and 2012 … Winner of the Corbett Award as the state of Louisiana’s top female amateur athlete in 2012 … and two stints as a member of Team USA, the country’s national softball team.

Pretty good for a player who came to UL without a lot of fanfare in 2008 and wound up being a part of the UL Athletics Hall of Fame class of 2022.

“Once she became a Ragin’ Cajun, everyone not only knew her name, they became very highly aware of her tremendous eye and power,” said long-time Cajun softball coach Yvette Girouard.

“Opposing coaches paid her the biggest compliment of all … she was probably walked intentionally more times than anyone could count.”

Before she became one of the South’s most feared hitters, perhaps it was her all-around athleticism in high school that disguised her softball abilities. The New Orleans native was a standout swimmer, and when not in the pool she was an All-State selection and led Mount Carmel to a state championship – in soccer.

Orgeron was such an unknown quantity that she redshirted her true freshman year in 2008. But once she got her chance and focused strictly on the diamond, great things started to happen. It’s not by coincidence that the Cajuns won 245 games during her five years in the program, including a 53-6 record in her senior season.

“At first glance, you’d be impressed by the athleticism that oozed from her,” Girouard said, “but her bat was not a strong attribute to her game. She wasn’t a feared hitter before she arrived at UL, but that changed in a hurry.”

And she was just getting warmed up. Need proof? Take a glance at the NCAA softball record book.

By the time she finished her Cajun career, she held the NCAA Division I record for grand slams in a career (nine) and at the time ranked third in NCAA history for single-season runs batted in (101 as a junior in 2011). Her six grand-slams as a senior in 2012 is still the NCAA record over a decade after her career ended.

In a program that has produced way more than its share of power hitters, Orgeron still holds UL records for extra-base hits in a season (48) and a career (141), for doubles in a game (3 as a sophomore in 2010 against South Alabama), grand slams in a season (six) and career (nine) and RBI in a season (101) and career (288). Her final two seasons remain the two biggest RBI total in school history with her 101 runs plated as a junior and 94 more as a senior.

“In a state that’s produced so many All-America-level collegiate hitters, she ranks right up there with the best,” Girouard said. “And it wasn’t just the long ball. You could count on her for her power, but she also had a tremendous eye for getting base hits and getting them at clutch times … when people would pitch to her.”

She earned Sun Belt Player of the Week honors no fewer than 10 times and was national Player of the Week once, while also being named on the Sun Belt’s Academic Honor Roll and Commissioner’s List two years each. She finished her degree in 2012 and was the fifth player selected in the National Pro Fastpitch League draft that year.

Between her junior and senior years, Orgeron was a member of the USA Women’s National Team that won the 2011 World Cup, and she also won a gold medal at the Pan American Games where she hit .636 for the tournament. One year later and after graduation, she rejoined the national team and helped win a second World Cup title along with a silver media at the 2012 ISF World Championships.

“None of that surprised me,” Girouard said. “She was so consistent and could do so many things with a bat in her hand.”