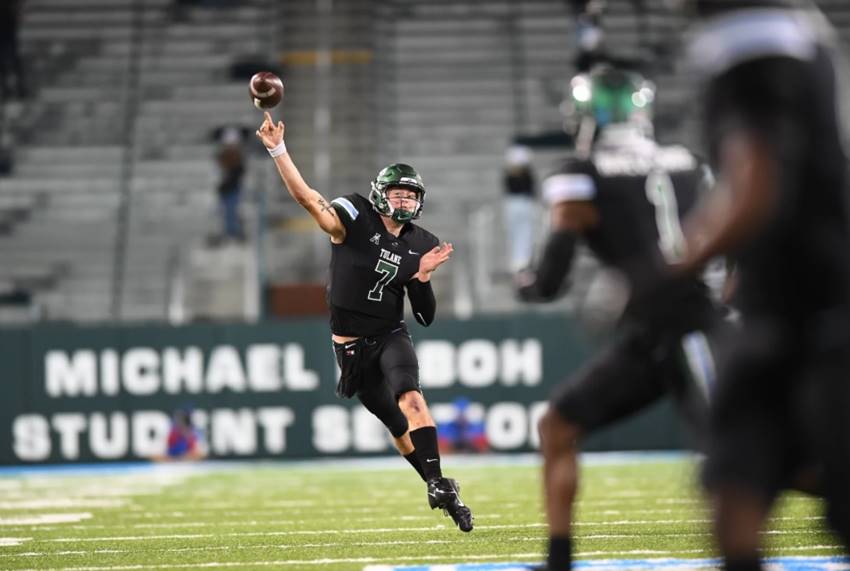 GREEN WAVE CONCLUDE 2021 SEASON ON SATURDAY
• The Green Wave head North on Saturday for their 2021 regular season finale against Memphis. Kickoff is set for 6:30 p.m. CT on ESPNU.
• Tulane’s matchup with Memphis will mark the Green Wave’s 38th all-time meeting with the Tigers.
• Saturday’s contest also will mark the final game for 16 Tulane players.
• The Green Wave will be in search of back-to-back wins for the first time all season.
• Tulane will be in search of its first win at Memphis since the 1998 campaign. Tulane has lost by double-digits in every meeting at Memphis since it defeated the Tigers back in 1998.
• Tulane trails in the all-time series by a 23-13-1 count. The Green Wave has won two of the last three meetings.
• The Green Wave have not defeated the Tigers in back-to-back seasons since the 1997-98 seasons.
• Tulane will look to build off of its 45-14 win last week against USF.

FIRST AND 10
1. Over the past six games, Tulane running back Tyjae Spears has returned to his explosive 2020 form, as he has rushed for a team-best 548 yards (6.8 yards per carry) and scored six touchdowns during that six-game stretch. Spears is currently averaging 78.6 yards per game in conference games which ranks fifth in the AAC.
2. The Green Wave have won the turnover battle in each of the last three weeks. During that period, Tulane has forced three fumbles and picked off three passes.
3. Tulane’s special teams unit has successfully executed FOUR onside kicks this season. Tulane’s four recovered onside kicks lead the FBS this season.
4. The Green Wave’s matchup with Cincinnati on Oct. 30 marked the fourth nationally-ranked opponent Tulane has faced this season. Tulane has not played four nationally-ranked opponents in the same season since the 1971 campaign. The Green Wave’s meeting with Cincinnati also marked the second No. 2-ranked team Tulane has faced this season (Oklahoma was the first).
5. Prior to the Green Wave’s trip to ECU, Tulane announced its team captains for the remainder of the year. Linebacker Nick Anderson, offensive lineman Sincere Haynesworth, linebacker Kevin Henry, defensive lineman Jeffery Johnson, quarterback Michael Pratt and linebacker Dorian Williams were all voted as captains by their teammates.
6. Senior Ryan Wright has established himself as one of the top punters in the nation. His 48.0 yards per punt lead the American Athletic Conference and rank sixth nationally. Most recently, Wright was selected as a semifinalist for the Ray Guy Award.
7. Pratt has thrown at least one touchdown pass in 19 of his 20 collegiate games . He currently has 40 career touchdown passes and has cracked into the program’s all-time Top 10 in career touchdown passes (he currently ranks seventh all-time).
8. The Green Wave have surpassed 200 yards rushing in 16 games dating back to the start of the 2019 season. Tulane led the American in rushing yards per game last year, averaging 217.1 per game.
9. Tulane has rushed for 100 yards or more as a team in 73 of its last 76 games. Tulane had its 56-game streak of rushing for at least 100 yards as a team snapped at Houston back on Oct. 8, 2020.
10. Tulane’s special teams rank sixth in the nation in net punting (43.9 yards per game).

SCOUTING MEMPHIS
• The Tigers enter their matchup with Tulane after they suffered a 31-13 setback at No. 17/17-ranked Houston last week.
• Memphis wide receiver Calvin Austin III led the way for the Tigers offensively against the Cougars, as he recorded his sixth 100-yard receiving game of he season, totaling a game-high 103 yards on five receptions.
• Austin is currently in the midst of a historical season for the Tigers. His 1,129 receiving yards rank fifth all-time on the Memphis single-season list.
• Memphis enters the game having lost three of its last four games. The Tigers are one win away from being bowl eligible for the eighth straight year.
• True freshman quarterback Seth Henigan has thrown for 2,986 yards this season which broke Paxton Lynch’s freshman program record of 2,056 passing yards. He is the only true freshman to start a season opener in program history.
• Defensively, the Tigers are led by linebacker JJ Russell. Russell currently ranks third in the NCAA in solo tackles and seventh in total tackles (113).
• The Tigers were picked to finish fifth in the American Athletic Conference 2021 Preseason Poll.

BALL HAWK
• Junior safety Macon Clark has made a significant impact for the Green Wave this year, as he has collected an interception in three of the last four weeks.
• Clark currently leads the team with four interceptions. He also leads the team in tackles with 68 stops.
• Clark’s 0.4 interceptions per game rank 10th in the nation and third in the AAC.

MEMPHIS HOMECOMING
• Tulane defensive lineman JoJo Dorceus returns to Memphis after he spent four seasons with the Tigers from 2016-20.
• In his four seasons at Memphis, Dorceus totaled 141 career tackles, 35.0 tackles for loss and 15.0 sacks.

GOING TOE-TO-TOE WITH THE BIG BOYS
• Tulane’s near victory over second-ranked Oklahoma is nothing new for Willie Fritz coached teams.
• Fritz’s teams have made a habit of putting a big-time scare into their big-time opponents from the ACC, BIG 12 and SEC.
• In the Green Wave’s outing against No. 2-ranked Cincinnati, Tulane trailed by just two points at the half.
• In 2018, Tulane took Wake Forest into overtime, but fell 23-17.
• In 2019, Tulane trailed by just eight points (14-6) midway through the third quarter at 10th-ranked Auburn, but ultimately fell 24-6.
• Fritz’s Georgia Southern squad took Georgia into overtime in 2015.
• In 2014, Fritz’s Georgia Southern team nearly defeated NC State on the road, but fell 24-23. In that same season, GSU fell by just four points to a Georgia Tech team that went on to win the Orange Bowl.
• In 2012, Fritz’s Sam Houston State team held a 20-10 halftime lead over Baylor.

TULANE ATHLETIC ESTABLISHES – WAVE BRAND WORKS
• In the spring of 2020, Tulane University Athletics partnered with the Tulane Center for Sport on new name, image, and likeness initiatives to enhance student-athletes’ education and personal brand.
• The partnership between the Center for Sport and Tulane Athletics will provide Green Wave student-athletes with a comprehensive educational program to help equip each individual with the knowledge and expertise to maximize their NIL opportunities in a way that is compliant with NCAA legislation, as well as with federal and state laws.

DORIAN WILLIAMS LEADS THE WAY
• Sophomore Dorian Williams was named to the preseason watch lists for the Bednarik and Lombardi Awards.
• In the 2021 opener at Oklahoma, Williams tallied eight tackles which tied for the team lead.
• Against UAB, led the team with seven tackles.
• Against SMU, Williams posted seven stops.
• Williams ranks second on the team in tackles with 67.
• Williams stepped up on the defensive side of the ball for the Green Wave in 2020. He has finished first or second on the team in tackles on nine occasions last season.
• Williams led the Green Wave with 98 total tackles and 16.5 tackles for loss.

NEXT MAN UP ON DEFENSE
• The Green Wave’s defense had a next man up mentality with five different players recording double-digit tackles on 10 different occasions in a single game last season.
• Senior Marvin Moody started the trend with 20 tackles against Navy, which is a single game team-high on the season.
• Sophomore Dorian Williams followed that performance with 10 tackles at Southern Miss.
• At Houston, Williams logged 12 tackles.
• Junior Larry Brooks was the next Tulane player to do it with 11 against SMU.
• Williams added 12 at UCF.
• Junior Nick Anderson got in on the action with 14 tackles in the win over Temple.
• Williams achieved the feat again when he recorded 11 tackles at Tulsa. Anderson followed suit with 11 tackles himself in the same game.
• Williams finished the year with 14 tackles in the Famous Idaho Potato Bowl.

RUNNING DEEP AT RUNNING BACK
• The Tulane running back room is one of the deepest in the country as it returns redshirt freshman Tyjae Spears and redshirt sophomores Cam Carroll and Ygenio Booker. The returning running backs combined for 1,056 rushing yards and 14 rushing touchdowns in 2020.
• The Green Wave will return nearly half of their rushing yards from running backs (47.5 percent) during the 2020 season.
• Against Morgan State, Tulane had eight running backs carry the ball in the Green Wave’s win over the Bears. Tulane finished the day by rushing for 294 yards on the ground as a team.
• Against Cincinnati, Tulane rushed for 187 yards against the Bearcats.
• In last week’s home finale, Tulane rushed for 190 yards on the ground against USF.

FOR THE BRAND
• Senior Ryan Wright has made a habit of booming punts throughout his career with the Green Wave.
• Most recently, Wright was selected as a semifinalist for the Ray Guy Award.
• He currently leads the American Athletic Conference and ranks sixth nationally, averaging 48.0 yards per punt.
• Throughout his career has totaled over 8,000 punt yards (8,838). He is one of only five Tulane players to surpass 8,000 career punt yards in program history.
• He needs just 162 punting yards on Saturday to surpass 162 for his career. Only three punters have surpassed 9,000 career punt yards.
• In Wright’s first game of the 2021 campaign, he averaged 49.7 yards per punt and against Oklahoma.
• Against Morgan State, Wright’s lone punt traveled 68 yards.
• In Tulane’s trip to Ole Miss, Wright averaged 45.8 yards per punt and dropped two punts inside the 20-yard line.
• Following his performance at Ole Miss, he was named to the Ray’s 8 List – an honor that the Ray Guy Award bestows on the Top 8 punters of the week.
• Wright has posted an average of 46.2 yards per punt against UAB and ECU.
• Against SMU, Wright had three punts for 161 yards (53.7 average).
• Against at UCF, Wright averaged 48.3 yards per punt and drilled a season-best 69-yard punt.
• On Nov. 13 against Tulsa, Wright averaged 49.75 yards per punt and posted a 65-yard punt.
• In 2020, Wright finished the regular season as one of 14 punters that surpassed 2,000 punting yards.
• Following the 2020 campaign, Wright earned All-AAC First Team honors.
• Prior to the 2021 campaign, Wright was selected to the preseason watch list for the Ray Guy Award.