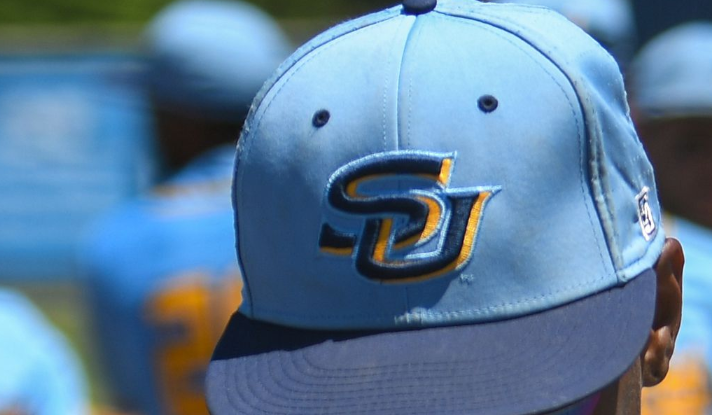 STARKVILLE, Miss. — The stage was set for the 2019 edition of Southern University baseball to recreate one of the most memorable NCAA Tournament wins in the program’s history.

The Jaguars, playing in the state of Mississippi for the first time in the postseason since the 2003 team stunned Southern Miss 5-3, wreaked havoc on the Mississippi State pitching staff but missed a golden opportunity to pick up the program’s fourth tournament win.

Southern second baseman Johnny Johnson blasted a 2-run homer to tie the game at 6 in the top of the seventh before the Bulldogs scored five unanswered runs to escape an opening game upset 11-6 Friday afternoon at Dudy Noble Field.

Seniors Javeyan Williams and Ashanti Wheatley recorded three hits at the plate and combined to score three runs on the day. Williams, the Jaguars leading hitter coming into the Starkville Regional, finished 3-3 with a double and a sacrifice fly. Wheatley went 3-5 and recorded two stolen bases. Tyler LaPorte added two hits in five at-bats with an RBI.

Southern starter Jerome Bohannon allowed a run in the first inning before the Jaguars scratched across their first run of the game in the third. With two outs, Javeyan Williams kept the inning alive with a bunt single to MSU starter JT Ginn. Williams advanced to second when Ginn’s failed pickoff attempt resulted in an error and lead to LaPorte’s RBI single through the left side.

The Bulldogs responded in the bottom half of the third when Justin Foscue doubled down the left field line to score Jordan Westburg and reclaim the lead at 2-1.

Then the Jaguars took advantage of an unlikely situation.

MSU made an impromptu change on the mound, relieving starter and SEC Freshman of the Year Ginn to address an injury during warmups. Wheatley welcomed reliever Brandon Smith into the game with a single into left field then stole second and third base.

After Malik Blaise reached after being hit, Bobby Johnson drove in Wheatley with a single and open a three-run inning that gave the Jaguar a 4-2 lead.

The Bulldogs rallied in the fifth with a 4-run explosion setting the stage for Johnson’s game tying homerun.

With the game tied at six, closer Connor Whalen entered in the seventh but allowed five runs over the final two innings.

Southern next plays in the “New Dude” in an elimination game Saturday at noon.