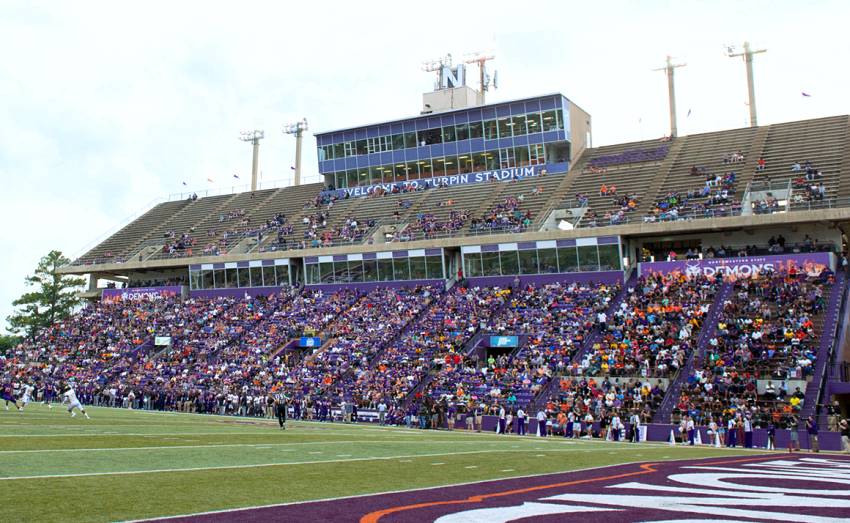 NATCHITOCHES – One thing is for certain when Northwestern State and Incarnate Word meet on a football field – the game will come down to the wire.

That has been the case, at least, for the past two meetings – both in San Antonio and both last-play Demon victories. Northwestern State will get the Cardinals in Turpin Stadium for the first time since 2016 on Saturday at 6 p.m. in NSU’s Southland Conference opener.

“We told the team when we met Sunday, you have to be ready to play 60 minutes or more,” fourth-year head coach Brad Laird said. “With both games ending on scores on the last play of the game, there were so many ups and downs, back and forths and momentum changes, which you’re going to see in any game. Look at those two games with UIW, and you see everything you need to see.”

The game will air on ESPN+ and can be heard on the Demon Sports Network, flagshipped by 94.9 FM The River in Natchitoches. Free streaming audio will be available on www.NSUDemons.com and through the Northwestern State Athletics mobile app, which can be downloaded free for Apple and Android devices. It also has been designated as NSU’s #FORKCancer game. Fans will have the opportunity to pick up purple ribbons to wear at the game in honor of those who have survived cancer. Additionally, NSU will honor medical personnel and first responders during the game, and Demon fans can text FORKCANCER to 71777 to donate to the local chapter of the American Cancer Society.

The Demons (0-3, 0-0) will try to pick up their second victory in four Southland Conference openers under Laird, having started the 2018 conference season with a win against Lamar. They will do so against a UIW team that is off to a 3-1 start and won its Southland opener, 31-0, against McNeese on Sept. 25.

NSU can draw from its 44-41 overtime win in 2019 and its 49-47 victory in April for inspiration as well as a preview of what the eight-game Southland Conference schedule will resemble. After seeing five of their six spring games decided by a one-score margin, the Demons have played one one-score game this fall – a 13-10 loss at Alcorn on Sept. 11.

“There are probably other conferences that are similar, but this conference has proven week in and week out, no matter home or away or who’s playing who, that opportunity (to get a win) is going to be there,” Laird said. “From our mind-set, those are the type of football games you get in the Southland Conference.”

As it turns out, the weather-affected schedule change was good – if not a little unusual – for the Demons. It was the earliest open week for Northwestern State since the 2018 when the Demons were open after three games as well.

“It was kind of weird,” senior tight end Jacob Logan said. “Even at my last school (McNeese), our bye weeks were pretty much the second to last week of the season, so it was new to me. I enjoyed it, and it was best for this team to re-evaluate and reassess going into conference. It was really good for us. We were able to get a lot of good work done.”

The adjusted schedule also gave the Demons a bit of a natural break. The Sept. 18 matchup against UT Martin marked the end of Northwestern State’s three-game, non-conference slate.

Saturday’s visit from the streaking Cardinals marks the start of NSU’s eight-game Southland Conference schedule. UIW has won its past three games after a season-opening overtime loss at Youngstown State.

Quarterback Cameron Ward, the reigning Jerry Rice Award winner as the top freshman in FCS, has built off his spring season and enters Saturday leading the Southland Conference in touchdown passes (13) and passing yards (1,288).

The Purple Swarm defense, meanwhile, comes into the matchup as the top unit in the Southland in terms of passing yards allowed, surrendering 186 per game. With the open week, Laird and his staff also hope to have a healthier roster on both sides of the ball.

“We were able to kind of reset and get guys healthy during that stretch,” Laird said of the open week. “We had an opportunity to get some guys back as we open conference play. When you look at it now, after things have settled down and taken place, (the open week) came at a really good team for our team as we go into conference play. Right now, one team (UIW) is 1-0 and one (McNeese) is 0-1. Everyone else is 0-0.”