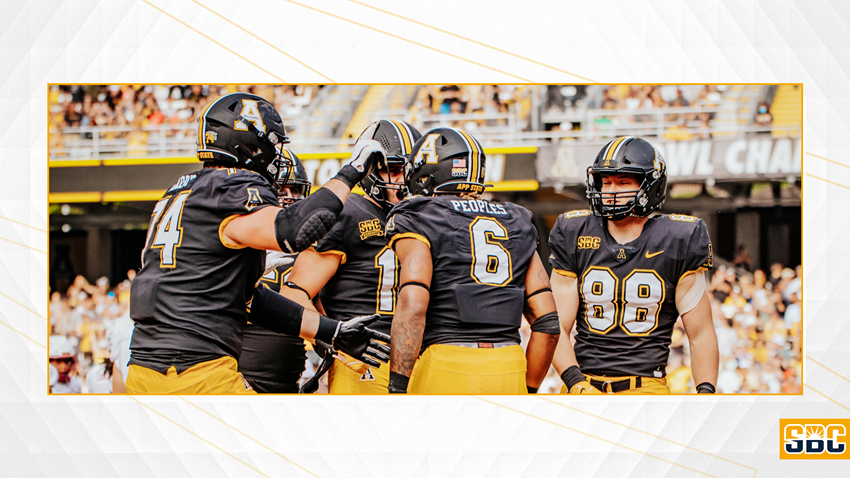 NEW ORLEANS – App State will welcome Marshall to Kidd Brewer Stadium for the first time in 25 years at 6:30 p.m. CT Thursday on ESPN. The primetime matchup will be the Mountaineer’s 20th national television appearance in the last 31 games.

No. 17/17 Coastal Carolina will conclude its non-conference slate by hosting UMass at 12 p.m. Saturday on ESPN+, while Georgia State will make it four-straight weeks that a Sun Belt program has faced a Top 25-ranked opponent when it takes on No. 23/23 Auburn at 3 p.m. Saturday on SEC Network.

WHAT TO WATCH FOR
• RIVALRY RENEWED – For the first time in 25 years, App State will host Marshall at Kidd Brewer Stadium at 6:30 p.m. Thursday on ESPN. The Mountaineers lead the all-time series, 14-9, though the Thundering Herd won last season’s meeting 17-7, handing App State its lone non-conference loss of the 2020 season. This will be the 20th national television appearance in the last 31 games for the Mountaineers, who are 37-12 all-time in games on ESPN, ESPN2 or ESPNU.
• NONE IF BY AIR – No. 17/17 Coastal Carolina will host UMass at 12 p.m. Saturday on ESPN+ to conclude its 2021 non-conference slate. The Chanticleer’s 38-28 win over the Minutemen on Sept. 2, 2017, was Coastal Carolina’s first victory as a member of the Sun Belt Conference and the FBS. Coastal Carolina is one of just six FBS teams that has not allowed a single passing touchdown this season, joining No. 9/7 Clemson, No. 6/8 Penn State, Rutgers, No. 7/5 Texas A&M and Washington. A win would give the Chanticleers back-to-back unblemished non-conference marks and would run the team’s record to 4-0 for the second-straight campaign and the fifth time in program history (2013, 2014, 2015 and 2020).
• PLAYING SPOILER – Fresh off its first victory of the 2021 season—a 20-9 win over previously unbeaten Charlotte—Georgia State will travel to No. 23/23 Auburn at 3 p.m. Saturday on SEC Network. The first-ever meeting between the two programs is Georgia State’s first date with an SEC foe since it upset Tennessee, 38-30, in the 2019 season opener. The Panthers will attempt to spoil homecoming for the Tigers, who own an 82-8-4 homecoming record including 29-straight wins.
• GRAND OPENING – The 2021 Sun Belt Conference season will kick off at 5 p.m. Saturday on ESPN+ when Louisiana visits Georgia Southern. This is the third-straight year that the Eagles will face the Ragin’ Cajuns in their conference opener. Louisiana leads the all-time series 3-1, including a 20-18 victory in 2020 via a walk-off 53-yard field goal from Nate Snyder. The kick was just the seventh of 53 yards or more in program history.
• BALL HAWKS – ULM hosts Troy in the conference opener for both programs at 7 p.m. Saturday on ESPN+. The Trojans lead the all-time series 10-7-1, though the Warhawks are 5-3-1 at home and 6-5 since Troy joined the Sun Belt Conference in 2005. ULM, which is coming off its first victory since Nov. 23, 2019, is one of four FBS teams that has not lost a turnover in 2021, joining Liberty, No. 19/19 Michigan and Rutgers. The Warhawks rank second in the nation with a 3.00 average turnover margin, trailing only Boise State. ULM has four fumble recoveries and two interceptions in two games played this season.

WHERE TO WATCH (times CT)