Zig and Zags: Who are the No. 1 Gonzaga Bulldogs? 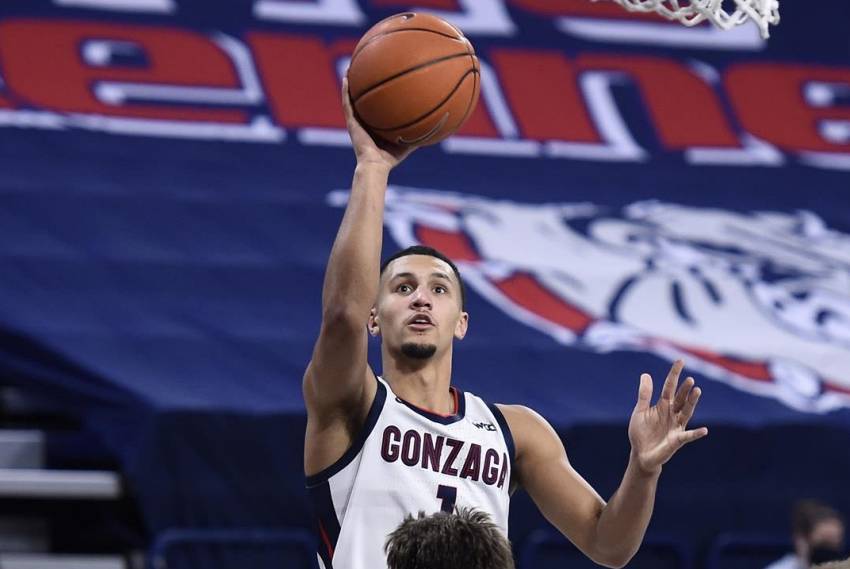 This extraordinarily challenging college basketball season with pandemic issues, games cancelled or postponed, key players missing time for various reasons and the normal everyday demands of the season itself has been hard on all involved parties. It takes a herculean effort to coordinate and keep the train on the tracks.

But all those issues have yet to derail Division I’s top ranked squad.

Whether you are an ardent college basketball fan or someone who simply fills out a bracket for March Madness, you are probably familiar with the Gonzaga Bulldogs.

Pretty much everyone’s Number 1, the artists also known as the Zags are worth a closer look.

Located in Spokane in Washington state, the Catholic private school has an enrollment of 7,548 students and boasts famous alums Bing Crosby and NBA legend John Stockton.

On the hardwood, the Zags don’t lose very often. Currently 20-0 this season, Gonzaga is 51-2 over the last two campaigns. They possess the highest winning percentage in college basketball the past decade.

Still, critics point to the West Coast Conference as a reason to not recognize them as a true elite. Not so fast. This season, Kansas, Virginia, Iowa and West Virginia are among their non-conference victims. Among their five canceled games, a much anticipated battle with No. 2-ranked Baylor was scrapped in early December.

Gonzaga made the Sweet 16 on 10 occasions with four Elite 8 appearances. Their only trip to the NCAA Final Four came in 2017, where they fell short, 71-65, to North Carolina.

Head coach Mark Few is the architect of the consistent Gonzaga steam roller in his 22nd season. The Zags have participated in March Madness 21 times under Few and have a 614-124 record (83.2%) during his tenure. He was National Coach of the Year in ’17 when his squad won 29 consecutive games to begin the season.

The 58-year old is the son of a Presbyterian pastor. Few joined the Gonzaga staff as an assistant in 1989 under Dan Fitzgerald and assumed control of the program in 1999 when Dan Monson jumped to a Power 5 job at Minnesota after Gonzaga’s first Elite Eight appearance.

It’s also good to note that Few has been a huge advocate for cancer research , raising over $1 million for the American Cancer Society.

As for his current team, there’s nothing ‘mid-major’ about it. The talent is top notch:

F Drew Timme (6-10, 235, Soph.) is averaging 19.4 points and 7.3 boards, connecting on 64% from the floor. He has recorded 25 points or more six times this season including a 13-rebound outing against BYU and their huge frontcourt. Timme is a rim protector with 18 blocks on the year.

F Corey Kispert (6-7, 230, Sr.) posts 19.2 points and 4.7 rebounds highlighted by a quick trigger release. He had 32 points versus Virginia. Hitting on 55.8% from field, a staggering 47.9 % from long range and 89% from charity stripe, Kispert is perhaps the nation’s most complete shooter. A deep threat who also attacks the rim, the highly intelligent All-American will land in the NBA Draft’s first round.

G Jalen Suggs (6-4, 205, Fr.) is the program’s highest ranked recruit ever. The 2020 National MaxPreps Male Athlete of the Year is the first in Minnesota history to earn Mr. Football as dual threat QB (offers from Ohio State, Iowa, Minnesota, Georgia, Nebraska) and Mr. Basketball (Baylor, Arizona State, Iowa, Colorado, Arkansas offers) in same year. He is averaging 14.2 points, 5.4 rebounds and 4.4 assists as a patient team player. Suggs is successful on 51.4% of his shots from floor with a highlight 27-point game against Iowa in a dominant neutral floor win for the Zags. He displays the quickest hands on the team with 39 steals this season.

G Andrew Nembhard (6-5, 193, Jr.) is a native of Aurora, Canada who transferred from Florida this offseason. He played in every game as a true freshman and recorded 67 starts for the Gators, averaging 9.5 points and 5.5 assists. This season, he is producing 9.2 points, 2.7 rebounds and 4.5 assists for the Zags. He does all the little things for a team loaded with options.

G Aaron Cook (6-2, 180, Sr.), a transfer from Southern Illinois, averages 4.6 points. He suffered a broken hand last season at SIU that is apparently no longer an issue.

C Oumar Ballo (7-0, 260, Fr.) averages 3.3 points and 1.9 rebounds. He has great potential and has dropped some weight. Ballo should be a force moving forward. Called the top international prospect by ESPN, he has been allowed to develop slowly in Spokane.

There will be challenges coming for Gonzaga. Will this be the year the Zags finally finish the journey? That’s going to be the biggest storyline this March.