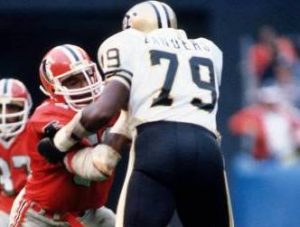 Bonine is in his fifth year as Executive Director of the LHSAA. He served previously in the same capacity for the Nevada Interscholastic Activities Association. The Allstate Sugar Bowl LHSAA state prep football championships will have six games this weekend in the Mercedes-Benz Superdome at noon, 3:30 p.m. and 7 p.m. Friday & Saturday.

Robicheaux is in his 17th year as the head coach at Destrehan, where he has guided the Wildcats to a pair of Class 5A state championships in 2007 & 2008 and led them to another title game appearance in 2014. Robicheaux has Destrehan back in the 5A championship game this Saturday night at 7 p.m. against top-seeded Acadiana in a game that you can listen to on 106.1 FM NASH ICON.

Brown his fifth season as head coach at his alma mater, where he was a player and former assistant coach before being named head coach in 2015. Brown promptly guided the Cougars to a Class 4A state championship game appearance before leading Karr to consecutive Class 4A state titles in 2016, 2017 and 2018. Brown has the Cougars in the state championship game once again, looking for four in a row this Saturday afternoon at 3:30 p.m. in the Mercedes-Benz Superdome when Karr faces Warren Easton in a game that you can listen to on 106.1 FM NASH ICON.

Phillips is in his fourth season as the head coach at Warren Easton. He took over as head coach in 2016 after serving four seasons as defensive coordinator. Phililps was an outstanding player at Karr and was a star linebacker on Tulane’s undefeated team in 1998. Phillips was part of two state championship basketball teams at Karr. He guided the Eagles to a state championship game appearance a year ago and he has Easton back in the title game this Saturday at 3:30 p.m. against Karr in a game that you can listen to on 106.1 FM NASH ICON.