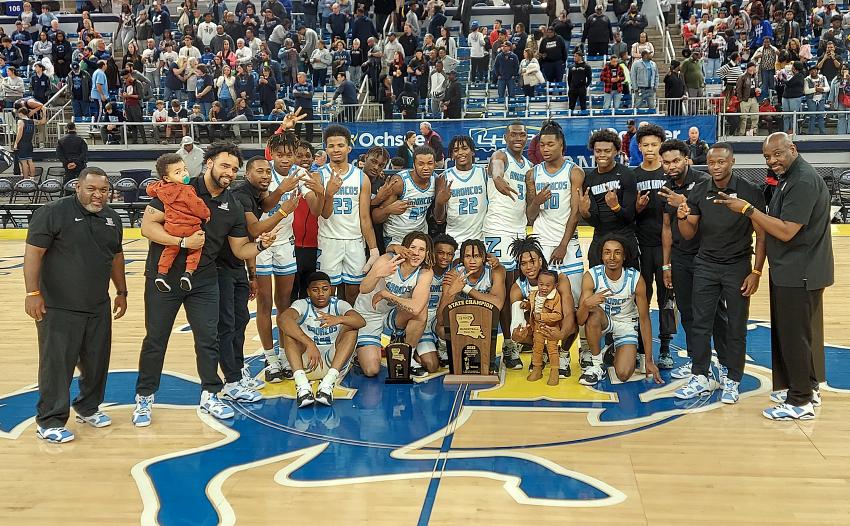 LAKE CHARLES – The Zachary Broncos were on a mission Saturday night.

The goal to finish with a second straight Class 5A Championship was a strong motivator for top seed Zachary in the Class 5A state title game Saturday night in Lake Charles.

No. 11 seed Northshore came to Lake Charles looking to shock the state of Louisiana and win the school’s first state championship.

Something had to give, and it wasn’t going to be the favorites.

The top-seeded Broncos used their combination of talent and championship experience to secure a 84-63 victory at the Burton Coliseum.

Zachary (33-2) set the tone early with Brandon Rogers-Hardy, Jordan Decuir and Kaleb Huggins scoring in the paint on the way to a 14-4 lead.

A pair of buckets by James Bridges helped the Panthers stay in range for awhile at 19-10.

The Broncos went on a 10-2 run in the second quarter, featuring Jalen Bolden wit a driving layup and a dunk. Joseph Tolis nailed a three-pointer for Northshore, cutting the lead to 29-15 before Zachary outscored the Panthers 11-5 in the last two minutes of the half. Micheal Quiett stepped up with a three pointer to make it 40-20.

Zachary pulled away, aided by a pair of three-pointers from Decuir and Tyler Brown. Huggins scored a driving layup and three-point play as the advantage for Zachary ballooned to 56-32. Northshore battled but could not overcome the superior Broncos.

Northshore (26-7) was paced by Kohen Rowbatham with 15 points and three assists. Bridges finished with 14 points and five rebounds.

The Panthers had a great postseason run to earn their first appearance in the state finals in school history. Many of the players who made it happen are set to return with a significant amount of experience under head coach Josh Carlin.

Bolden also verbally committed to the University of Louisiana at Monroe after receiving the scholarship offer just before tipoff of the Class 5A final.