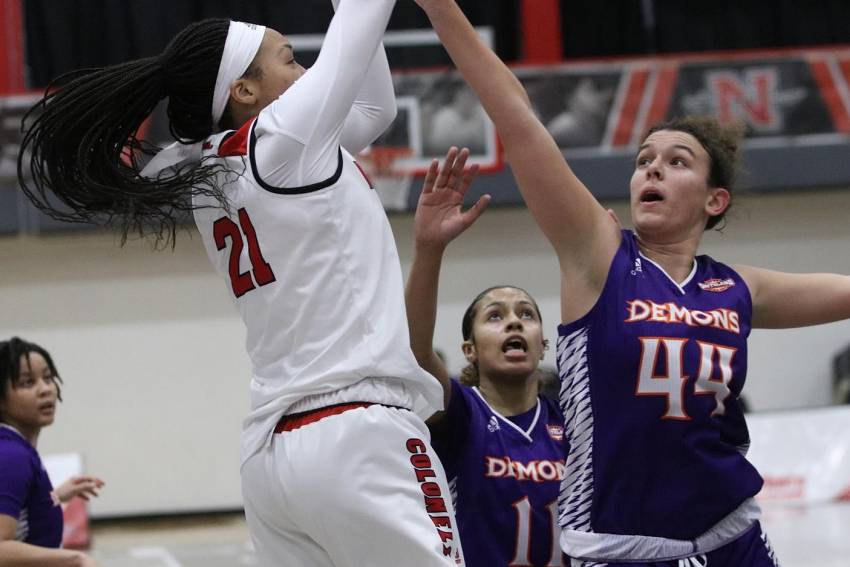 The 38 points tied for the fifth-fewest allowed in program history for Nicholls (4-7, 3-1 SLC) and it was the lowest offensive output for an opponent since a 67-34 win over UIW in 2015.

Cain, who had just five free throws in the first half before sitting with foul trouble, fueled the offense after the break as Nicholls scored 21 points in each quarter. The sophomore finished 8 of 9 from the field and was 6 of 7 at the free throw line to record her third 20-point game in conference.

Although Cain did not record a third double-double in league play, Adrian Mann notched the first of her career with 13 points, 11 rebounds and added three steals. The Colonels had 16 steals off of 31 Northwestern State (0-8, 0-3 SLC) turnovers, led by six steals by Terris McKay. The sophomore totaled four points and three assists in the win.

Nicholls trailed 13-12 after the first quarter, but Jazymn Womack and McKendree sank back-to-back 3-pointers to put the Colonels ahead for good. The Red and Gray outscored NSU 14-4 in the period to lead 26-17 at halftime.

The Lady Demons made it a five-point game early in the third after Julia Sion scored inside, but Chyna Allen answered with a 3-pointer and Cain followed with a bucket to double the lead. With less than four minutes remaining in the period, Nicholls exploded with a 12-0 run to take command of the game. Cain scored seven of the points, including an old-fashioned 3-point play, and Mann accounted for the other five.

Nicholls saw its first 20-point advantage in the fourth when McKendree nailed a 3-pointer with 4:30 remaining. She added one more 3-ball in the quarter, finishing 3 of 6 from long range and with 15 points.

UP NEXT
Nicholls hits the road in search of its first win away from Stopher Gym, taking on Central Arkansas on Saturday, Jan. 16. Tipoff in Conway is scheduled for 1 p.m.

SEASON TICKETS
Season tickets are now available by visiting Nicholls Ticket Central or calling the ticket office at 985-448-4790. New this season, fans have the option to purchase the Geaux BIG RED ticket package which will cover all home basketball, football, and baseball games.