It is getting to be old hat at Brother Martin but winning a state championship never gets old.

For the seventh time in eight years, the Crusaders celebrated a state wrestling championship at a school morning assembly Friday on the Gentilly campus. Brother Martin won the Division I state title last Saturday in Bossier City.

The championship was the 19th overall for Brother Martin, all since 1979, and the tenth for head coach Robbie Dauterive, a former Crusader wrestler.

“It doesn’t get old, we’ll keep working to keep that trophy here,” Dauterive said. “When we kicked it into gear in 1979, since then, we have the most state titles. That means a lot to us.”

Evans won 132 matches, losing just 19 with 64 pins in his illustrious career at Brother Martin. Evans carries a 4.6 GPA. Evans is a member of the National Honor Society and he will now go on to wrestling on scholarship at Virginia. Evans finished second in state as a sophomore.

“It’s exciting, I’m happy, it’s been a long time coming,” Evans said. “I’ve been wrestling for a long time. It’s always been a dream of mine. I tore my MCL in December. It was tough coming back but I knew my team needed me. I wanted to be there for them. I gave it everything I could.”

With a host of top returning wrestlers and the top junior varsity team in Louisiana, Brother Martin will be a formidable force again, as always, in 2020.

“The prospects for next year are great” Dauterive said. “We return Connor Hoffman. We return three state champions and a couple of state finalists, eight place-finishers and our JV won the state championship by 100 points. I didn’t come up with the tag-line 19 in 19, but I really like 20 in 20.” 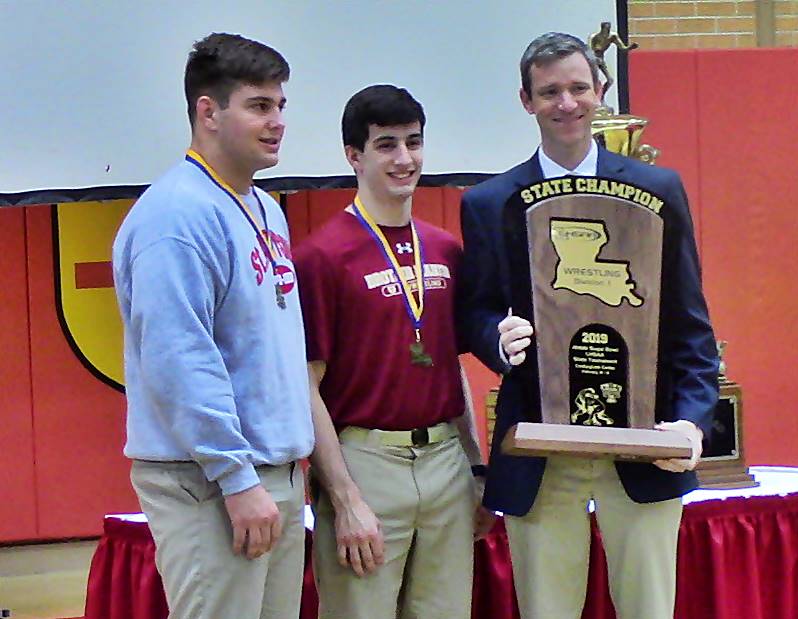