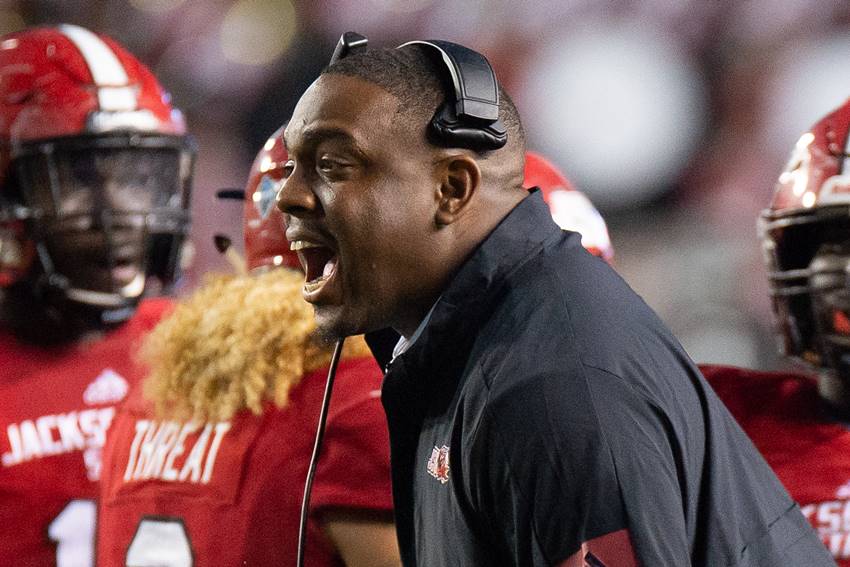 MONROE, La. – Willie Green, who spent the last four seasons as the defensive line coach at Jacksonville State, has accepted the same position at ULM, according to an announcement made Tuesday, Jan. 12 by head coach Terry Bowden.

During his four-year tenure, the Gamecocks went 28-13 (.683), including an 18-6 record (.750) in Ohio Valley Conference games, won back-to-back league titles in 2017-18 and advanced to the second round of the NCAA Football Championship Subdivision those same two seasons.

In addition to coaching the defensive line for Coach John Grass, Green served as the defensive run game coordinator for the last three seasons.

Jacksonville State posted a 3-1 record during an abbreviated fall schedule in 2020. Through four games, the Gamecocks ranked among the NCAA FCS Top 5 in total defense (third at 312.5 yards per game), rushing defense (fourth at 137.1 ypg.), passing efficiency defense (fourth with a 121.5 rating), scoring defense (fifth at 24.0 points per game) and takeaways (fifth with 6).

In 2018, the D-line helped set the tone for a 9-4 season, including a 7-1 league record en route to the OVC Championship, and a trip to the NCAA FCS second round. JSU ranked No. 15 in the NCAA FCS in total defense, allowing 311.3 yards per game, and led the OVC and finished seventh nationally in tackles for loss (8.2 pg.).

In 2017, JSU produced a 10-2 worksheet, including a perfect 8-0 record in OVC play, and advanced to the NCAA FCS second round. During their run to the OVC Championship, the Gamecocks extended the nation’s longest active NCAA Division I conference winning streak to 32 games.

“I’m thrilled to announce the hiring of Willie Green as defensive line coach,” Bowden said. “Willie did an outstanding job working with the defensive front at Jacksonville State, and he comes highly recommended by Clemson D-line coach Todd Bates. He’s worked in a winning environment at both Florida and Jacksonville State.

“When I accepted the job here, I made a commitment to hire the best and brightest young coaches I could find. Willie certainly hits those marks.”

“I’m excited about the opportunity to grow professionally here at ULM because Coach Bowden is assembling a great coaching staff,” Green said. “Growing up in Alabama, I’m certainly familiar with Coach Bowden’s name and proven track record. When the opportunity presented itself, I had to jump at it.”

In 2016, Green returned to his alma mater, Florida, where he served as a graduate assistant under head coach Jim McElwain, who led the Gators to the SEC East Division title and a 9-4 record overall, including a 30-3 victory over Iowa in the 2017 Outback Bowl.

A native of Hoover, Alabama, Green began his first stint at Jacksonville State as a graduate assistant in 2014-15 under Grass and then-defensive line coach Todd Bates, who has since moved on to Clemson and saw three of his D-linemen selected in the first round of the 2019 National Football League Draft (Clelin Ferrell, Christian Wilkins and Dexter Lawrence).

In his two seasons as a graduate assistant, JSU posted a 23-4 overall record (.852), including 16 consecutive league wins and back-to-back OVC Championships, while advancing to the NCAA FCS quarterfinals in 2014 and the 2016 FCS National Championship Game the following season. Over the 2014-15 seasons, Green worked closely with seven different D-linemen who earned All-OVC honors, including 2014 All-American and OVC Defensive Player of the Year Devaunte Sigler.

A four-year letterman at Florida from 2008-11, Green played his first three seasons for Coach Urban Meyer and his senior season for Will Muschamp. He appeared in 13 games as a true freshman on Florida’s 2008 National Championship team and later served as a team captain as a senior in 2011.

Following his collegiate career, Green went to training camp with the Cleveland Browns before playing in the Arena Football League.

He earned a bachelor’s degree in criminology from Florida in December 2011.

Green played for Coach Grass at Spain Park High School in Hoover, Ala., where he earned All-America and first-team all-state honors as a linebacker/defensive end in 2007. In addition, he was named to the Alabama Sports Writers Association’s Super 12 Team. As a senior, Green amassed 114 tackles, including four sacks, while leading the Jaguars to the 2007 Class 6A Championship Game.