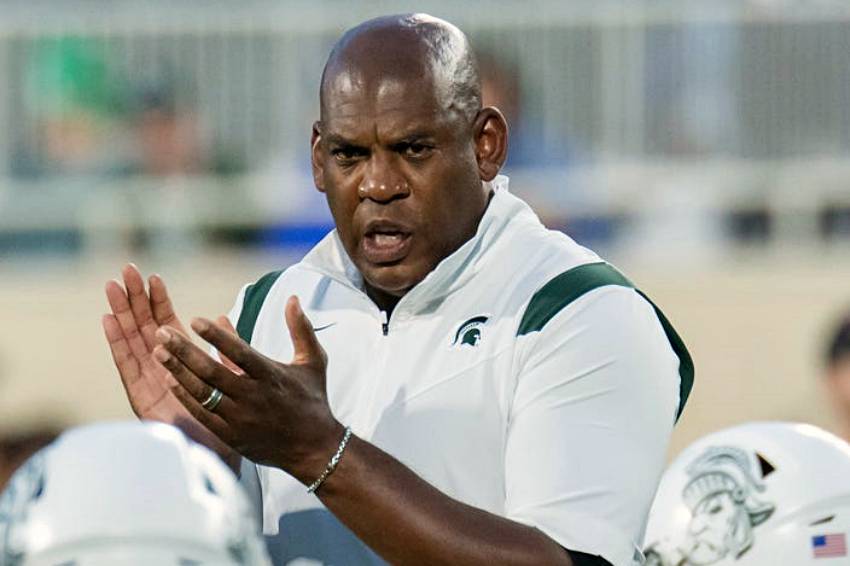 I don’t claim to have any inside information regarding who will be the next LSU head coach. Many names have been tossed around, some pushed by agents hoping to get their clients pay increases at their current locales.

However, there are potential candidates worth discussing.

One coach whose name seemed to jump out into the mix early in the process is Michigan State’s Mel Tucker. Set to turn 50 in early January, he may check all of the boxes.

Michigan State, ranked 8th in the country, hosts rival No. 6 Michigan in an enormous rivalry game Saturday. The Wolverines are a 4.5 point favorite, which may not mean much. As a 24.5-point underdog last October, the Spartans upset their in-state nemesis in Ann Arbor, 27-23. Michigan State has won nine of the past 13 matchups between the two.

Why am I mentioning all of this? Because the outcome of that game could have a ripple affect on the LSU opening. A Spartans win would open eyes across the country.

Tucker has stated that he wants to bring a national title to East Lansing. Beating Michigan to stay perfect puts Michigan State firmly in the conversation entering November.

Winning in the SEC would be a bigger challenge than in the Big Ten but LSU’s advantages are well chronicled.

When quizzed about the opening at LSU, Tucker replied, “My focus is on the upcoming game against the school down the road. That’s my concentration and my focus and I really appreciate you understanding that.” There was no adamant denial.

Reportedly, Tucker’s buyout at State is $6 million. Currently, he earns $ 5.5 million per season. There is a donor base at Michigan State who feel that they could match any offer LSU would throw at their head coach. If an offer came, Tucker would become a much richer man either way.

The last LSU head coach hired from Michigan State didn’t fare too badly. His name will come up shortly.

Prior to taking the Michigan State head coaching gig before the 2020 campaign, he served as head coach at Colorado for one season.

Tucker, a defensive back at Wisconsin who arrived for Hall of Fame coach Barry Alvarez’s first campaign with the Badgers, helped in a Big Ten title-winning effort in 1993, punctuated with a 21-16 win over UCLA in the Rose Bowl. He was teammates with former Badgers star Troy Vincent, the current NFL executive VP of Football Operations, as well as Colt GM Chris Ballard and Jaguars offensive coordinator Darrell Bevel.

His football coaching journey began at Michigan State under Nick Saban as a grad assistant in 1997. He followed Saban to LSU in 2000 as the Tigers’ defensive backs coach. Tucker knows the defensive side of the ball very well.

The Cleveland native was a defensive coordinator in the NFL with the Bears, Jaguars and Browns for a total of seven seasons. During his tenure in Cleveland from 2005 to 2008), his secondary had 73 interceptions. He was interim head coach in Jacksonville for five games to finish out 2011 following the dismissal of Jack Del Rio.

His SEC experience is recent, serving on Saban’s Alabama staff in 2015 as assistant head coach and secondary coach followed by three year’s as Georgia’s defensive coordinator.

If he lands at LSU, Tucker would become the sixth black head football coach in SEC history, joining Sylvester Croom, Joker Phillips, James Franklin, Derek Mason and Kevin Sumlin. He has launched a website with the theme “Communicate, educate, resources” and contains topics including voting rights, social justice causes and mental health awareness. He is a member of the Big Ten anti-hate and anti-racism coalition.

Viewed nationally as a relentless recruiter and a developer of talent, Tucker has plenty of strengths when it comes to the rigors of a major college head coaching challenge.

There are many other names in the rumor mill. Tucker’s is just one who might fit the bill in Baton Rouge.

DOLLARS GOING OUT: Pertaining to cost of doing business, LSU will have a mountain to scale to square away with their coaching staff. The Ed Orgeron buyout accounted for nearly $17 million. The Daily Advertiser obtained records which indicate it would take another $9.5 million to pay off the assistant coaches if none are retained by the next boss.

The Tigers are already satisfying deals with Bo Pellini for $4 million and Scott Linehan for another $1 million. Former offensive line coach James Cregg is suing for breach of contract.