The inaugural Brian Kelly version of LSU spring football has come to an end after 15 practices and the spring game.

There is still work that needs to be completed prior to the season opener against Florida State but much was accomplished in the buildup for the fall.

There was a sense of urgency among the players moving from station to station during drills. That was a culture shock to some.

We’ll look at the state of the Tigers on offense with spring in the books.

Offensive coordinator Mike Denbrock contends that he has only installed a portion of the overall attack for the 2022 season. He is still awaiting who the first-string quarterback will be in order to determine how the offense will best suit the starter.

Jayden Daniels, who worked from the shotgun at Arizona State, is still adjusting to taking snaps under center on occasion. His abilities as dual threat will be utilized whether he is is the starter or not. There will be specific plays for him due to his mobility.

As for becoming LSU’s main man behind center, Daniels did not help himself at time, missing open receivers at times or having poor ball placement. He is a legit running threat for which defenses must accout. A little inconsistent from one play to another, Daniels flashes greatness as well. In the spring game, he recognized single coverage with safety Derrick Davis and delivered an accurate 20-yard scoring toss to Jack Bech over the top of the defense. It was an impressive delivery that leaves coaches wanting more.

Kelly sang praise for senior Myles Brennan’s overall performance during the 15 practices. The starter from early 2020 looks to be in command of the offense and has the respect of his teammates as a leader on the field. Good placement on his throws and more relaxed demeanor are pluses. Brennan seems well suited for Denbrock’s offense and finds secondary receivers through progressions.

Garrett Nussmeier, the redshirt freshman, has experienced growth since conclusion of ’21 season, some of which cannot be seen by the naked eye. He has grown in confidence regarding the mental aspects of the game.

Much more comfortable in the huddle and at the line of scrimmage, Nussmeier can place the ball where it needs to be on deep throws and squeeze it into tight windows. He often hits receivers in stride with catchable balls. A highlight Saturday came via a pretty teardrop throw to Malik Nabers for a 30-yard reception over top of defense. Another was a naked bootleg in the redzone for an eight-yard score to Bech.

Walker Howard has been experiencing ups and downs throughout spring. The true freshman has obvious talent. He may possess the strongest arm of entire group.

Moving on to the running back battles, it appears that position will not have a featured runner. It will take a committee, at least in the early stages of the season.

John Emery, Jr. has run hard after knocking rust off this spring. Missing all of 2021 has led to a more focused approach for him. Emery does not go down often on initial contact. One of the most sought after backs in the 2019 signing class, it may finally be time for him to show his array of talents. Emery has displayed good receiving skills. If anyone jumps ahead of the pack to secure the most touches at the position, the Detrehan product may be the one.

Armoni Goodwin also shows solid hands as receiver. Limited to six games last fall, the 5-foot-8 sophomore has the speed to be a threat and perhaps see third down work.

Tre Bradford may be the best all around talent as a runner, blocker and receiver. He doesn’t excel in any one area but the solid overall skills gives him three-down potential. Lean and muscular, the Texan looks poised to see plenty of action.

Josh Williams hauled in a pass on a wheel route in the spring game for touchdown. Another capable receiver out of backfield, he also added a 23-yard scamper, juking defenders down the field.

Penn State transfer Noah Cain arrives this summer. He may be the choice at least for short yardage work with a stout frame to run hard between the tackles.

Wide receivers coach Cortez Hankton was a great addition. A hands-on type, he will push his group for more consistency

Nabers is tough to cover one on one. He uses his body well and utlizes a great catching radius. A nice juggling grab in back of end zone for an 11-yard score from Brennan was another spring game highlight moment.

Jaray Jenkins has become a key target for all quarterbacks. He can make plays on less than perfect throws for acrobatic catches.

Brian Thomas makes catches in tight coverage. Yet another option with an impressive catching radius, he can haul in contested throws including deep balls.

Bech was a productive receiver as true freshman last fall with 43 catches, 489 yards and three scores. He has made strides this spring, becoming a better route runner and improving his blocking.

Kayshon Boutte, Chris Hilton and signee Landon Ibieta will join the fray in preseason practice. A healthy Boutte will be the top target no matter who takes the snaps.

The staff still has help wanted sign hanging for the tight end position. Going in motion, lining up in slot or wide and being a dependable blocker are among the requirements.

Jack Mashburn only made four grabs last year but the former walk-on’s contributions goes way beyond stats. He displays maximum effort and is great teammate.

Kole Taylor has shown improvement but the junior must prove himself.

Ex-LSU pitcher Nick Storz returned the team recently and signee Mason Taylor will arrive in the summer. Bech could return to spot in some instances. The staff really needs to find experienced talent through the transfer portal.

The offensive line, still a work in progress, has seen many different combinations. The experimentation is not over.

Will Campbell (6-6, 317) an early enrollee, has not disappointed.He plays with balance and the maturity of an older, more experienced player. The Neville product seems to get better everyday, holding his own in matchups against Ali Gaye and B.J. Ojulari as a left tackle. Campbell plays so smoothly, you hardly notice him. He could be a starter.

Cam Wire slides in pass protection, moves his feet, has good knee bend and could start at either tackle spot.

Miles Frazier (6-5, 325), the transfer from Florida International, seems to have solidified the right guard spot. He could also play either tackle position if needed. Frazier does a good job maintaining contact with opponents. He handled one on ones against Maason Smith and earned high grades as blocker.

Tre’Mond Shorts, senior transfer from East Tennessee State, arrived with much fanfare as a FCS All-American in 2021. The powerful blocker tops the depth chart at left guard.

Kimo Makane’ole is another guard option.

Charles Turner continues to evolve at center. He snaps the ball cleanly and quickly engages, shooting his hands to make contact with defenders. Interior play on the line is more sudden, with opponents in such close proximity. Turner has handled nose tackles on inside zone running plays. Onlookers see him as a pleasant surprise who will have to fight to keep the starting spot with competition from Garrett Dellenger and Marlon Martinez when that pair return from spring injuries.

Xavier Hill, a sophomore, is capable of playing tackle and guard but the latter is his best spot. Marcus Dumervil, also a sophomore, showed flashes at tackle during spring drills.

Kardell Thomas rarely saw field under the previous administration but the junior guard may be able to take advantage of a new lease on football life. However, he still carries some bad weight and struggles with sudden movement through the A or B gaps. He must move quicker so reshaping his body is a continuing project to which he must stay committed. Thomas is very powerful but better movement in pass protection must come for him to see the field.

Fitzgerald West, an early enrollee and converted defensive tackle, is still learning the center position. In the sprng game, he sailed a snap over the quarterback’s head in shotgun formation, forcing turnover.

Bo Bordelon and Emery Jones arrive for the preseason. The former may get a look at center. 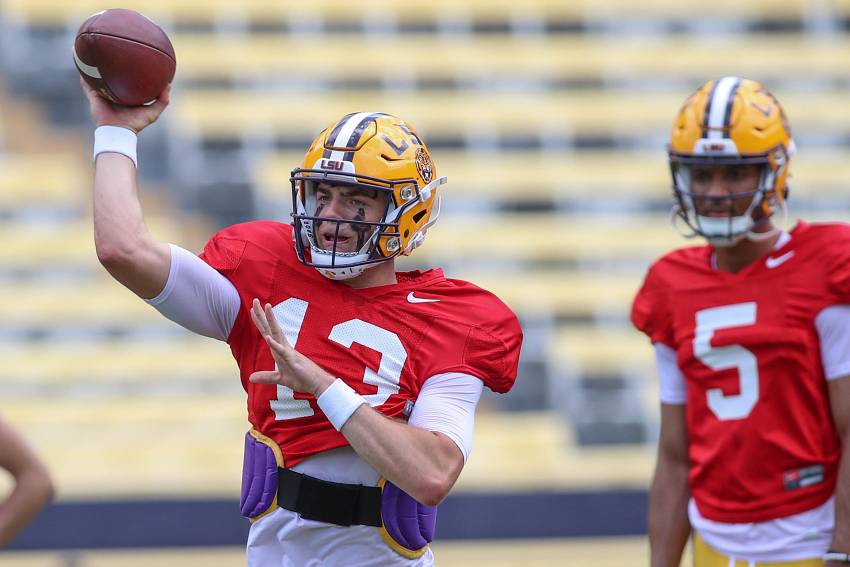 Important decision at quarterback includes many strong options for LSU

Four talent Tigers have given head coach Brian Kelly much to ponder after the spring practice. 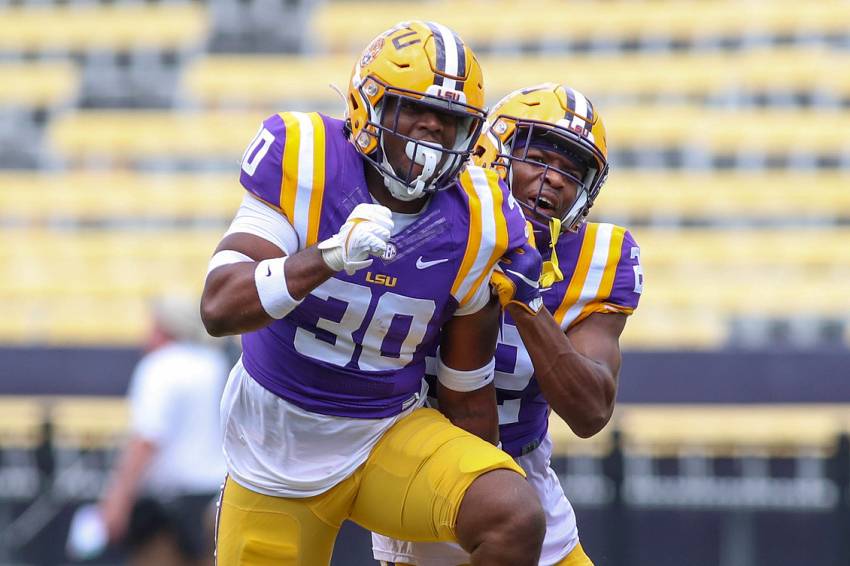 We recently had an overall perspective as to which players during spring drills have opened eyes on the offensive side of the ball at LSU. Now it’s time to look at the defense. New defensive coordinator Matt House admitted that his system is not fully installed just yet. As the unit begins to take on...