What would Rick Gaille think of Bryson DeChambeau?

My late, great friend Rick Gaille was an elite golfer at the University of New Orleans and as an amateur champion.

Rick chose coaching football over pursuing a professional golf career. It was a wise choice. He made a tremendous difference in the lives of so, so many young people in helping shape their lives and point them toward successful lives.

Rick’s life was a huge success.

As a man passionate about golf, we would have frequent conversations about the sport, one which I admire but to not play, though I have run many golf events.

We would weave golf into our Three Tailgaters Show on Saturday mornings with Ed Daniels, Rick and me, particularly when the four major events took place.

That would have been the case last week with the U.S. Open.

I wonder what Rick’s take would have been on Bryson DeChambeau?

From one year to the next on the PGA Tour, DeChambeau put on 20 pounds of muscle.

When you add the muscle, the distance of shots changing dramatically was predictable.

Still, no one thought he would win a major on a course requiring accuracy and punishing those who landed in the rough or, in the case of The Open in Great Britain, in the deep pot bunkers.

We did not get to see the latter in this pandemic-stricken year but we are seeing the other three majors, with The Masters still to come Nov. 12-15 at Augusta.

DeChambeau went out and destroyed the field to win the U.S. Open at one of those difficult courses at Winged Foot at Mamaroneck, New York last week.

It was not close. He was the only player under par in the event.

Predictably, the reaction was substantive.

Rory McIlroy is among the elite players in the world and a four-time major champion.

An accurate player and tough-minded, McIlroy is the antithesis of what DeChambeau is as a player.

Predictably, McIlroy does not appear to be a huge fan of what DeChambeau did in New York and what he is doing regularly.

“He’s the opposite of what a U.S. Open Champion does,” McIlroy said of DeChambeau.

Apparently, Bryson did not get the memo from Rory. He did not follow the prescribed script.

Instead, he went completely off script, writing his own story, re-writing history.

He hit only four of final 21 fairways and still posted a terrific final round 67.

No other golfer broke par on the final day. DeChambeau used his massive strength to blast out of the deep rough long and accurately. In fact, DeChambeau hit only 23 of 56 fairways for the week.

The success of DeChambeau at the U.S. Open is nothing new.

By the way, DeChambeau was only seventh in driving distance at Winged Foot last week.

Johnson and Matthew Wolff both averaged 333 yards per drive. Wolff finished second at Winged Foot while Johnson tied for 6th. McIlroy tied for eighth. John Rahm is huge and a huge hitter.

The top five in world rankings this week are Johnson, Rahm, Justin Thomas, McIlroy and DeChambeau. Thomas is more along the lines of McIlroy as a player. The other three are three of the biggest blasters in the world.

Tiger Woods was the longest hitter of his time. Bubba Watson won a pair of Masters with his bombs. The course at Augusta National was re-designed to make it Tiger-proof, for goodness sakes.

By the way, Jack Nicklaus, who has expressed some concern about the direction of the game, was a long hitter as well.

The best conditioned athlete is typically the best athlete and best performer—in any sport.

Rafael Nadal, Roger Federer and Novak Djokovic have dominated tennis for a decade on the men’s side. Of course, they have the shots. Then again, they are workout warriors, in tremendous shape, ready to outlast any other opponents, as they have.

In bowling, Mark Roth helped change the game by hooking a ball (rubber, plastic) that would not hook, based on the surface.

Eventually, the equipment changed, modernized and others came along and were dominant who could create maximum revolutions resulting in more strikes.

Still, the straightest player around, the most accurate player, Walter Ray Williams Jr., became the best player on tour, perhaps the best ever with the most titles in PBA history.

Then, the game changed completely with the advent of the two-handed players.

Jason Belmonte has been the best bowler on the PBA Tour for the last several years.

Like DeChambeau, purists have complained about the unfair advantage with the excessive power to strike that Belmonte and other two-handed players have by generating more revolutions and strikes.

Of course, that is more debatable to me than the golf issue as bowling balls were created with three holes, to be used by one hand, not two. 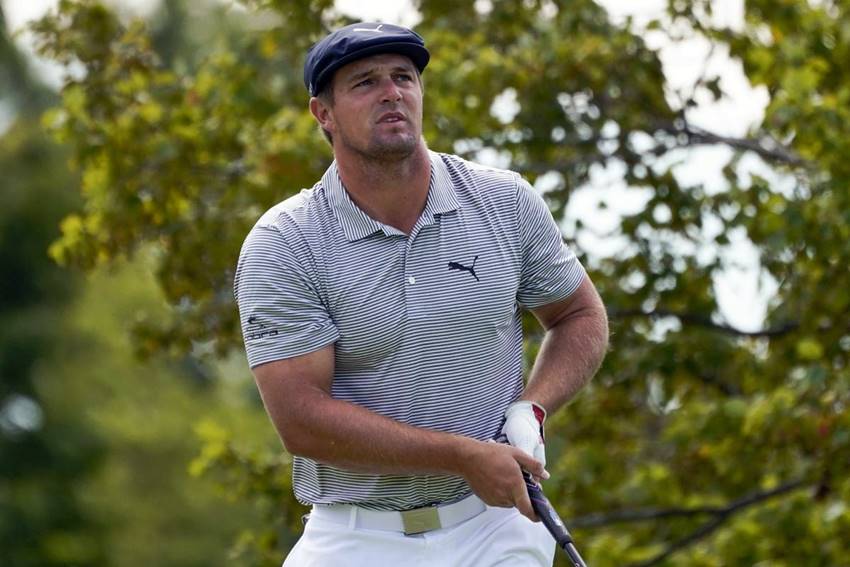 DeChambeau is doing nothing different than others with his equipment or how he hits the ball.

The belly putter was a different issue, allowing an elongated putter and allowing those who were not good putters traditionally to “guide” putts toward holes. A rule was put into effect to regulate how these putters are used.

Meanwhile, DeChambeau continues to use science, studying and utilizing biomechanics, as perhaps the most analytical (and one of the slowest players) on tour. He analyzes every shot before making it.

DeChambeau has changed his putting stroke several times. He is in a comfortable place, if uncomfortable to watch for us.

The results are obvious.

DeChambeau has ranked no worse than 32nd in putting on the PGA Tour over the last three years and is climbing the Billboard charts, pressing the vinyl toward a top 20 ranking if not a top 10 hit.

DeChambeau is experimenting with a different size driver and different head designs in search of driving the ball even further.

What is the solution to tempering this feared take-over of the game by a guy perceived by some purists as a monster who is scaring, even bullying others and the game, itself?

Can you make a golf course “Bryson-proof?”

Perhaps you can eliminate more of the long par fours and instill more par three holes, which require irons and accurate tee shots, along with being a good putter.

By the way, DeChambeau is a good, sometimes outstanding putter, as he was at Winged Foot.

There is the thought process of having golfers all use the same balls to have a level playing field.

Maybe you can grow the rough even higher or thicker to make it virtually impossible to get out of successfully.

Then, there is this.

Can you put a limit on how big a golfer can be in terms of muscle mass? Should we punish players for maximizing conditioning?

Incidentally, some of the biggest hitters in PGA history did not win a major and many were hardly viable because their iron game and putting was simply insufficient.

DeChambeau has a solid short game and can putt. He chips quite well, as we saw at the U.S. Open.

DeChambeau is not just a mad bomber, with all due apologies to Daryle Lamonica.

They are major champions because they are simply very good players.

Change is hard in all phases of life.

What do you think, Rick?

Knowing my friend, my guess is that The Coach would be very analytical and ultimately would conclude that DeChambeau has simply outworked others to transform himself and his game into elite status while maintaining that those who govern golf should consider uniform limitations pertaining to equipment regulations.

Rick would be fair, as he always was. What DeChambeau is doing is fair, by the rules.

Rather than taking the posture of “how dare he change the game by keeping the ball in the air for so long,” perhaps we should concentrate on how we care about how the golfer will fare under the red hot glare of the pressure of major championships.

DeChambeau may be the heir to the throne once held by the Golden Bear. He is rare. Others had better beware.

Rick would consider it all to be a bit of a peculiar affair, not a nightmare like others, but he would admire the fire of DeChambeau, the commitment to win, to be the best he can possibly be, whether he liked him or not.

That, based on the outlook and life of my friend, would be par for the course. Of course, par is not in the vocabulary of DeChambeau while the vocabulary used by some detractors to describe DeChambeau cannot be repeated here.

That is good for the game, gets more watching, just as Wood, Nicklaus, Arnold Palmer and Lee Trevino did.