The circle is complete.

When Jackson Dennies started his education at Archbishop Rummel, he had notions of being a two-sport star.

With good size, football was in his line of sight and a real possibility as a future at the college level as he was immediately cast as a tight end to play a big role on the Raider squad.

As a baseball player, Dennies had ability as a good throwing catcher and as a potential pitcher with a live arm for the Raider baseball squad.

Then, fate intervened with a catastrophic knee injury in a game against Teurlings Catholic on Sept. 22, 2017 in a game in Lafayette as Dennies tore all three ligaments in his knee.

“I did not think this was possible on that night,” Dennies said. “God has a plan and it all worked out. I kept my faith in this entire journey and I am so happy that I ended up here.” 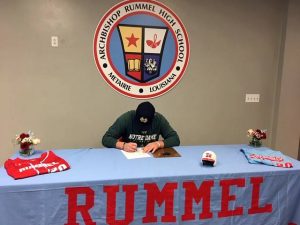 The thoughts crossing the mind of Dennies on that fateful night ran the gamut but one was immediate.

Ultimately, his positive thoughts and fervent desire and determination to recover, rebound and restart his career overcame the regression of a seriously damaged knee which needed serious rehabilitation.

Dennis made the decision to put football in the rear view mirror to concentrate on baseball. It turned out to be a good decision.

“Baseball was always my first love over football,” Dennies said. “Definitely baseball. I felt all the way back once I got cleared to play. I’ve always had the confidence in myself. After a few practices, I knew I was back.”

On Wednesday, that decision paid off handsomely as Dennies signed a letter of intent to play baseball at Notre Dame. 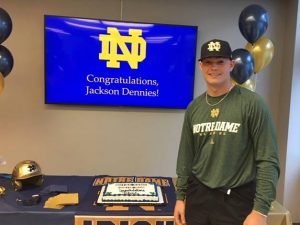 “Notre Dame is a great place,” Dennies said. “I loved every single second I was there. I love the coaches, the facilities, the campus, everything. I just fell in love with it. This is a great opportunity for me. I’m real excited to see where it goes.”

Notre Dame recruited Dennies, who throws in the mid to upper 80’s, to pitch.

Dennies had an excellent junior season for Rummel, helping lead the Raiders to the Division I state title game. On the season, Dennies went 9-1 with a 1.60 ERA and two saves, winning a critical semifinal game against Catholic of Baton Rouge in Sulphur.

At the plate, Dennis batted .272 with seven doubles, two triples, a home run and 28 RBI and did a fine job behind the plate when not pitching.

“We were close last year,” Dennies said. “We’re coming for it this year. I feel this team can win the state championship this year. Our team was phenomenal last year but we have the right tools to win it all. We have the pitching that can go extended in a ball game.”

Now, he gets a chance to pitch at a storied institution, continuing the Catholic education he has embraced at Rummel. What could have been a very sad story has turned into a very happy one for the Dennies family.

“I’ve been waiting for this ever since I started playing baseball,” Dennies said. “It seems so surreal. I couldn’t be happier right now. The knee is fine.”

So is Dennies, his family and all those associated with Archbishop Rummel for a very likeable young man who is well liked and respected by teammates, coaches and fellow students.