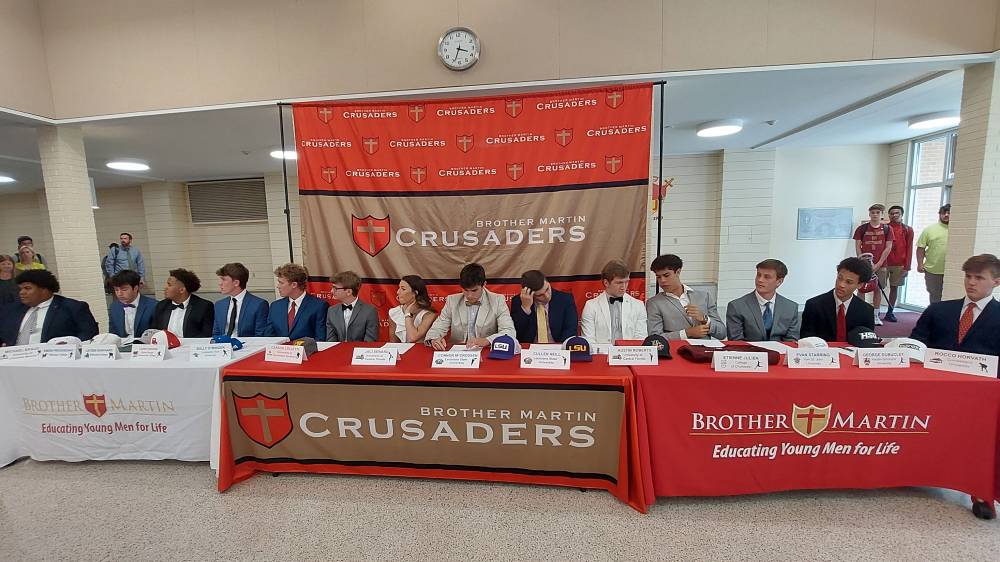 NEW ORLEANS – Brother Martin usually holds its national letter of intent signing ceremonies inside the Terrace, but with 14 student-athletes in six sports signing Thursday afternoon, the location moved to the much more spacious Benson Mall.

Among the signees were a pair of state champions.

Wrestler Rocco Horvath, who won the individual state title at 170 pounds and led the Crusaders to a 21st team title, is headed to Cumberland University, an NAIA program in Lebanon, Tennessee.

Bowling’s Carson Colletti, who delivered a clutch 10th-frame strike to clinch the team’s sixth state championship last month, will continue his career at the University of Tennessee Southern, an NAIA program in Pulaski, Tennessee.

In football, Michael Braud is headed to ULM, Simon Provenzano will continue his career at Millsaps and Jayden Shephard will play at Bethany College in Lindsborg, Kansas.

Two soccer players are leaving the state to play in college – Etienne Julien at the College of Charleston and George Dubuclet at Hardin-Simmons University. Another will cross the Atlantic Ocean – Evan Starring is headed to England to play for York St. John University.

Four members of the Crusaders’ cheer squad also are continuing their careers in college – Connor McCrossen and Cullen Neill at LSU, and Austin Roberts and Jaci Seward at UCF.