NEW ORLEANS – When the buzzer sounded Monday night at Lucas Oil Stadium and Baylor had not only knocked Gonzaga from the ranks of the unbeatens, but claimed the school’s first national championship, the celebration began in Waco, Texas.

A few hundred miles east of Waco, the countdown was on.

After an NCAA championship limited in so many ways on the heels of the COVID-19 pandemic in 2021 – which, of course, was better than an altogether canceled event as the nation learned about the coronavirus just days before Selection Sunday in 2020 – what everyone hopes will be the return of full-scale March Madness will end next April 2 and 4 in the Superdome.

State and local officials welcomed the opportunity at a news conference Tuesday.

“Here we are,” Gov. John Bel Edwards said, “at the end of a very long year, when there hasn’t been much to celebrate … I just think it’s going to be incredible.”

Added New Orleans Mayor LaToya Cantrell, “The city is so eager to be a host once again, and there’s no better event (than) the Final Four. We understand these events, what it means to the economy, to the city of New Orleans, to the state of Louisiana.”

In 2012, when New Orleans last hosted a Men’s Final Four, the state realized a $168 million economic impact and $14 million in direct taxes.

“It’s going to be better than that next year,” Gov. Edwards said.

Two phases of the four-phase Superdome renovation will be completed by this time next year.

“The idea you can take a building, renovate it and make it a very competitive building, that’s exciting,” said Gov. Edwards. “The fan experience is going to be so much different and so much better.”

Tulane and the University of New Orleans are serving as co-hosts. 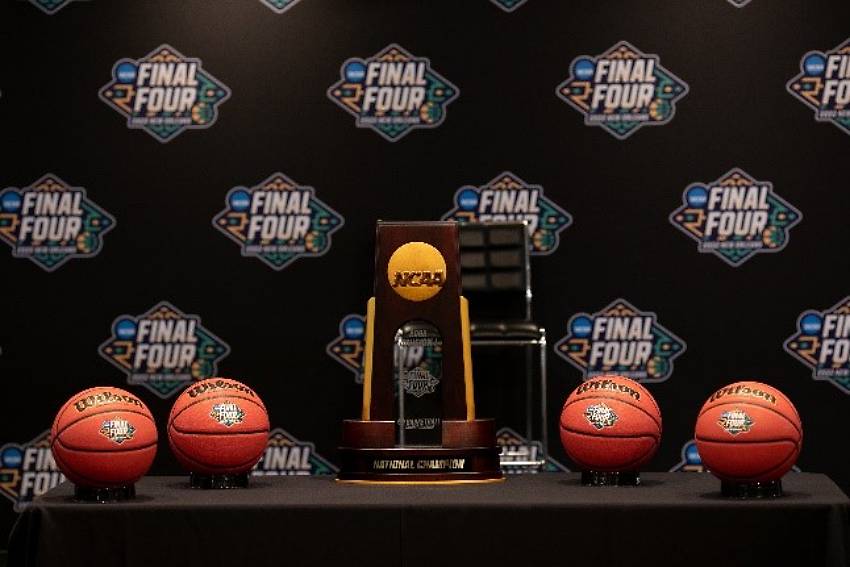 In addition to the national semifinals and championship game, Final Four weekend also includes a concert series, fan event at the Morial Convention Center and the National Association of Basketball Coaches convention.

“New Orleans is an easy sell,” Gov. Edwards said. “That’s why national events like to come to New Orleans.”

NEW ORLEANS – New Orleans and Louisiana will proudly host the NCAA Men’s Final Four, one of the country’s largest sporting events, for the sixth time, on April 2 and 4, 2022 in the Mercedes Benz Superdome.

“Next year will be the first time we’ll be back to normal, except it’ll be better than normal,” said Louisiana Gov. John Bel Edwards. “New Orleans is an easy sell, that’s why these national events like to come to New Orleans. When we get 75,000 or so visitors, it makes a tremendous difference for our city and state.”

LOC co-chairs David Sherman and Paul Valteau, Tulane Head Basketball Coach Ron Hunter, University of New Orleans Athletic Director Tim Duncan and Greater New Orleans Sports Foundation Senior Vice President Jeff Rossi participated in a series of panel discussions that focused on the economic and community impact of the Final Four to New Orleans and Louisiana as a whole. The panel highlighted what the community can expect from the event and provided insight on planning for the Final Four during the pandemic.

“The city is so eager and ready to be a host, once again,” said New Orleans Mayor LaToya Cantrell. “I have to say, I know that others around the county and the world are ready to get themselves back to the city of New Orleans. There’s no better event to be celebrating, and even waiting for and anticipating for, than the Final Four.”

New Orleans is no stranger to hosting world-class sporting events. Preparing for the Final Four during the COVID-19 pandemic presents unique challenges for the NCAA, LOC and co-chairs. These organizations will lean on their unmatched experience and resources to create a remarkable National Championship week, while generating substantial economic impact and positive media exposure for the State of Louisiana and City of New Orleans.

“Today’s tip-off event is an exciting step towards hosting the 2022 NCAA Men’s Final Four in our great city and state,” said LOC Co-Chair Paul Valteau. “It’s an honor to work with the seasoned professionals of the New Orleans Local Organizing Committee that, despite a pandemic, have been and will continue working to rise above many obstacles to create a memorable Final Four for our community. We look forward to welcoming visitors back and letting the country know that New Orleans and Louisiana are open for business.”

“New Orleans has a great legacy of hosting five previous Men’s Final Fours, filled with legendary coaches and unforgettable moments from players such as Michael Jordan, Keith Smart, Carmelo Anthony and Anthony Davis,” said LOC Co-Chair David Sherman. “The 2022 NCAA Men’s Final Four is going to be a monumental event for New Orleans in its own right because it’s going to be the one of the largest, if not the largest, major sporting event to take place in the city since the COVID-19 pandemic.”

Officially awarded the tournament in November of 2016, the LOC has been working diligently to coordinate event details with the NCAA. Over the next year, the LOC co-chairs, host institutions and staff will continue to work closely with the NCAA, the State of Louisiana and City of New Orleans, ASM Global, New Orleans and Company and the Morial Convention Center to ensure the success of the Final Four and its ancillary events.

“Collaboration is key when it comes to planning and executing an event of this caliber,” said Jeff Rossi, Sr. Vice President, Greater New Orleans Sports Foundation who is serving as the Executive Director of the New Orleans Local Organizing Committee. “Now more than ever, our citizens and businesses need major events like the Men’s Final Four to stimulate jobs, reinvigorate our image, generate business revenue and help us recover from the pandemic. Working closely with Tulane, UNO, State leaders, the Mayor’s office and all our partners, the LOC is going to do everything possible to take advantage of the opportunities that only an event the size and scope of the Men’s Final Four can bring to Louisiana.”

In 2012, the NCAA Final Four drew more than 75,000 out of town visitors to New Orleans, accounted for more than 125,000 hotel room nights and generated an economic impact of $168 million. Additionally, the television broadcast of all three games drew a combined audience of more than 50 million viewers.