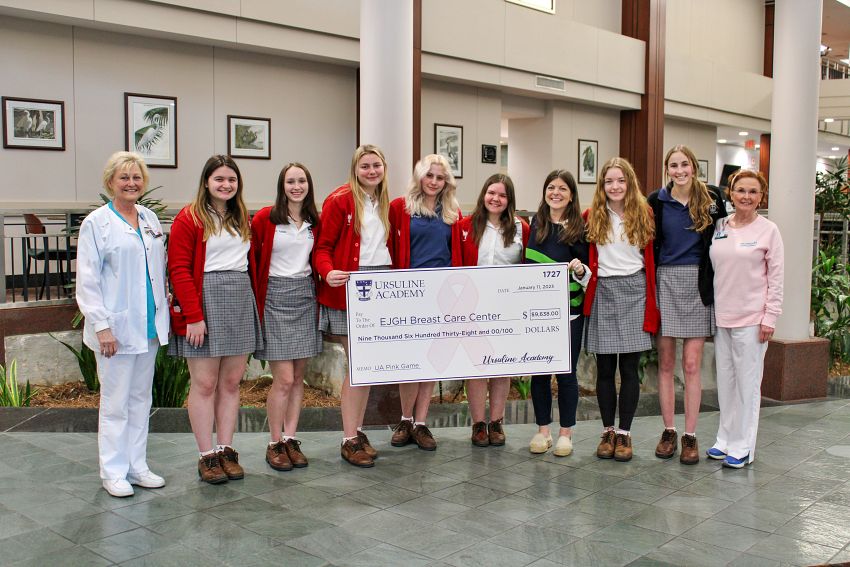 Ursuline Academy’s Pink Game began in 2008 in honor of Marta Bott, a former Ursuline coach, teacher and administrator. Just a couple of months after the 2008-2009 volleyball season began, Bott lost her battle with breast cancer. In the true Ursuline spirit of Serviam, meaning I will serve, the Pink Game tradition has carried on, raising both money and awareness for breast cancer, while celebrating the life of a beloved member of the Ursuline family.

Since 2011, Ursuline has partnered with East Jefferson General Hospital’s Breast Care Center. The funds have been used to purchase advanced diagnostic technologies, medical supplies, and educational resources. In addition, a portion of the funds was used for the expansion renovation of the Yenni Treatment Center, to include a dedicated treatment pod. The pod was dedicated with a plaque that reads “Given by URSULINE ACADEMY In Honor of MARTA BOTT.”

“As a proud 1970 graduate of Ursuline, I’m always in awe of UA’s community involvement,” EJGH Cancer Navigator Deborah Schmitz said. “It has been an honor to collaborate with the administration, faculty, students, and their families and witness their true dedication and commitment to SERVIAM. Although Coach Bott lost her battle with breast cancer shortly after the PINK GAMES began in 2008, UA has continued raising money and awareness of breast cancer – what a tribute to a beautiful heavenly soul.”

“Ursuline celebrates a long tradition of sisterhood and Serviam: I will serve,” Ursuline Academy President Karen Jakuback said. “I am so proud of our community for coming together to support such a wonderful cause.”