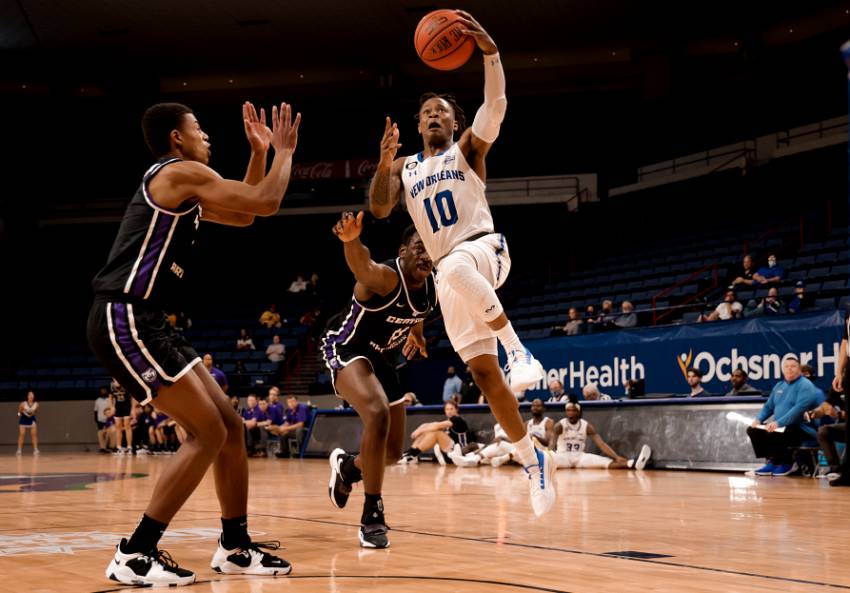 NEW ORLEANS – University of New Orleans graduate guard Derek St. Hilaire was named the Southland Conference Men’s Basketball Player of the Week after he cemented himself as one of the nation’s best as the Privateers competed in three games over the Thanksgiving holiday.

After he posted averages of 21.6 points, three rebounds and one assist per contest as UNO went 2-1 over the past week of play, the Atlanta, Ga. native is now ranked 13th in all of NCAA Division I and tops in the Southland in scoring (21.6 points per game), 11th in the country in free throw percentage (95.7 percent), sixth in the nation in field goals made (56) and ninth overall in total points scored (151).

Over the three games, St. Hilaire averaged 20-plus points in all three contests and has now gone for 20-plus in six of seven Privateers games so far this season. He also shot 50 percent from the field (23-of-46), knocked down seven threes (7-of-16 from beyond the arc) and went a perfect 12-of-12 from the charity stripe.

He got the week started with a 22-point outburst in a victory over former Southland foe Central Arkansas on Wednesday. In that game he added four rebounds, an assist and a block as the Privateers picked up a 90-63 victory.

St. Hilaire followed it up with 21 points on Thursday against Presbyterian and 22 points versus VMI on Friday.

In Thursday’s buzzer-beating heartbreaker, the graduate guard added three boards and an assist. In Friday’s bounce-back 79-71 win over VMI, St. Hilaire posted five rebounds, three steals and an assist, to go with the standout point totals.

St. Hilaire has now racked up 10 consecutive double-digit games, dating back to last season. He is the first Privateer to win the weekly conference honor in 2021-22 and this nod is the second overall during his UNO career.

Fans and supporters won’t have to wait long to see the squad back in action as the Privateers hit the road for two big non-conference games this week; a showdown with Texas A&M on Tuesday, Nov. 30, and a clash with Louisiana on Friday, Dec. 3. Tuesday’s game is set to tip at 6 PM CT while Friday’s contest gets underway at 7 PM, respectively. Both games will be available on the ESPN+ platform.