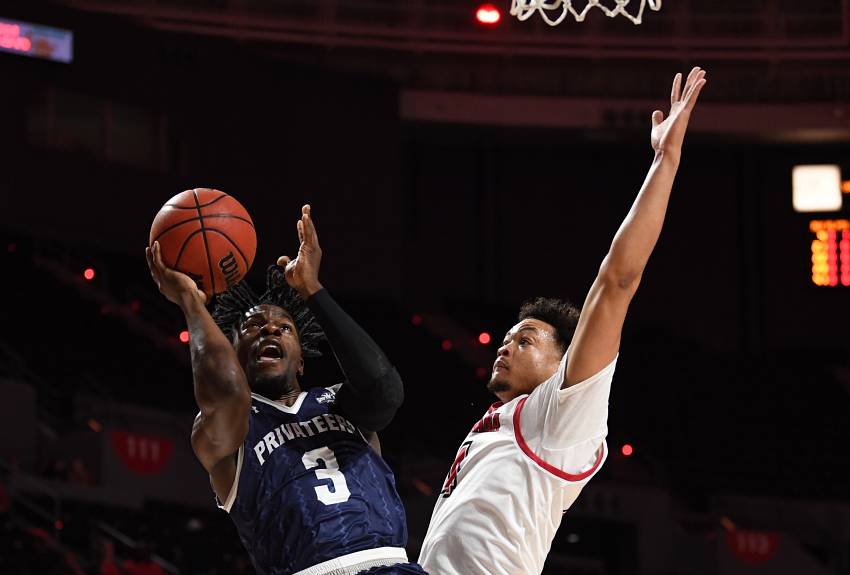 LAFAYETTE, La. – The New Orleans men’s basketball program played hard to the final horn, but it just wasn’t enough in the end as the Privateers dropped an 80-67 decision to host Louisiana in a non-conference contest at the Cajundome on Friday evening.

INSIDE THE BOX SCORE
– Tyson Jackson and Simeon Kirkland had a big day inside as the two bigs combined for 34 points (17 apiece) in the non-conference contest. Jackson went a perfect 8-of-8 from the field and added three rebounds and two assists. Kirkland hit 7-of-11 attempts from the field and chipped in four rebounds, an assist and a steal.
– Troy Green was the third Privateer in double-digits as he finished with 10 points (including a 2-of-3 mark from beyond the arc) and registered six boards, three steals, a helper and a block.
– The UL defense swarmed UNO’s top-scorer in Derek St. Hilaire, but he still found a way to make an impact despite the heavy pressure. The Atlanta, Ga. native had nine points to go with six rebounds, five assists and three steals. It was the fourth game this season that St. Hilaire picked the opposition’s pocket at least three times in a contest.
– Kmani Doughty finished a perfect 3-of-3 from the field (including 1-of-1 from deep) as he collected seven points. He also picked up five boards, a block and a steal. It was a season-high in both minutes played and rebounds.
– Daniel Sackey concluded the contest with five points, two assists and a steal.
– New Orleans finished with 38 points in the paint, 16 points off turnovers and 23 points off the fast break.
– Louisiana outscored the UNO bench by a 37-9 margin.
– The score wasn’t tied for a single time except for at 0-0 and the game featured just two lead changes.

HOW IT HAPPENED
– Louisiana got out of the gate hot in front of the home fans, but New Orleans was able to weather the storm as the Privateers kept it close throughout the first half.
– A Green steal and half-court floater was perfect at the buzzer as New Orleans went into the half down by just two, 34-32.
– Once again, the Ragin Cajuns started the second half on fire, but the Privateers were not going down quietly.
– The two teams played a back and forth first seven-plus minutes of the second, and a deep three by Green gave the Privateers their first lead of the game with 12:50 to go.
– From the time UNO took the lead, Louisiana was able to jump back ahead and keep New Orleans at bay as the Ragin’ Cajuns closed the game on a 32-18 run to seal the victory.

NEXT UP
The Privateers will get a short break for final exams before the group heads west for a non-conference showdown with Utah State on Saturday, Dec. 11 at the Dee Glen Smith Spectrum in Logan, Utah. Tipoff is set for 8 PM CT and the game will be streamed nationally on the Mountain West Network.