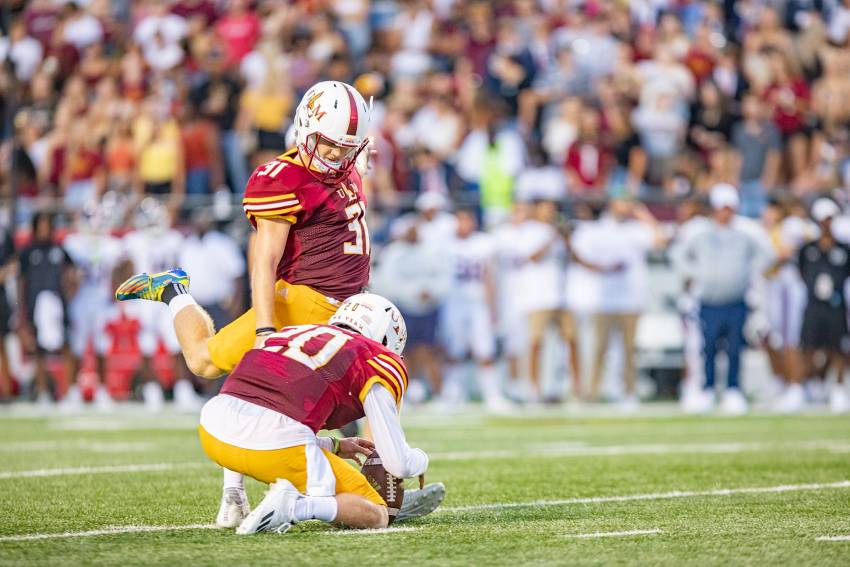 MONROE, La. – Fifth-year senior placekicker Calum Sutherland, who accounted for all 12 points in ULM’s 12-7 victory over Jackson State Saturday night, has been named Sun Belt Conference Special Teams Player of the Week as selected by a media panel. His 12 points matched his career high (12 at UCLA in 2019), as the Warhawks won for the first time since Nov. 23, 2019, 45-42 over Coastal Carolina, ending a 12-game losing streak.

A native of Keller, Texas, Sutherland converted 4-of-6 field-goal attempts, hitting from 29, 45, 42 and 49 yards. His 42-yarder early in the fourth quarter gave ULM a 9-7 lead and his career-long 49-yarder with 2:24 left in the game provided the final margin.

In addition, he has been selected as one of the Lou Groza Award Stars of the Week.

Through two games, Sutherland leads the Warhawks in scoring with 16 points, connecting on 5-of-7 field-goal attempts and 1-of-1 extra-point tries. He ranks fourth in the NCAA Football Bowl Subdivision with 2.50 field goals made per game.