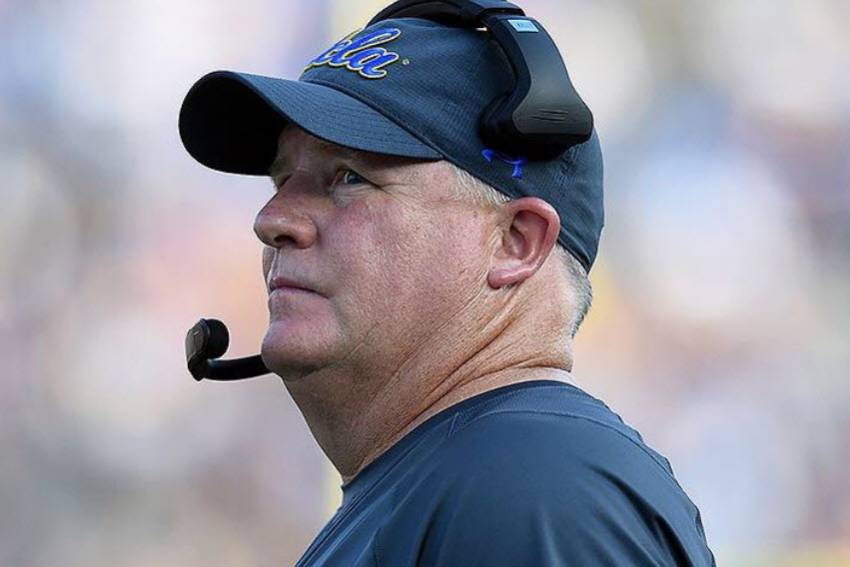 Looking to start their season off right, LSU will head west to battle the UCLA Bruins for their 2021 season opener.

The Bruins have the advantage of a  warmup game against Hawaii  on August 28 to knock the rust off before the Tigers arrive. UCLA will present an intriguing challenge.

Led by 57-year old veteran coach Chip Kelly who pulls in $3.5 million per year, the Bruins may be ready for a turnaround. He has experienced three consecutive losing seasons in L.A. after replacing Jim Mora. UCLA has had five straight losing seasons. In contrast, Mora led the Bruins to five bowl appearances in six years.

LSU faced off against Kelly once prior when he coached Oregon. The No. 4 Tigers downed the No. 3 Ducks in Arlington, Texas to open the 2021 season, 40-27. Kelly’s charges are not ranked this time around.

Offensively, UCLA held their own last season but the defense is where they lacked consistency. Justin Frye, the offensive coordinator in his third campaign.with the bruins, had previously been Kelly’s offensive line coach. He is the highest compensated assistant on staff earning $1.2 million. Jerry Azzinaro, the 62-year old defensive coordinator, earns $700,000 as he enters his fourth season in the job. He previously served as defensive line coach with the Eagles and 49ers under Kelly.

UCLA was second in the PAC-12 in total offense last fall, producing 455 yards per outing with impressive balance (224 rushing, 231 passing) and 35.7 points each game. The defense was seventh in conference, allowing 410 yards per game (274 passing, 136 rushing). The defense surrendered 5.4 yards per play.

One notable positive for the defense was the 23 sacks over seven games which equated to 3.9 per game to rank eighth nationally. The Bruins are a heavy rush team, featuring multiple  blitz packages.

Kelly’s teams are known for offense and junior quarterback Dorian Thompson-Robinson (6-1, 200) is the centerpiece. He is the conference’s returning passing leader with 16 college starts under his belt. Last season, the Las Vegas native tossed for 1,120 yards for 12 scores and four interceptions, completing 65% of his passes. He added 306 yards and three more touchdowns as a dangerous dual-threat despite missing two games due to COVID protocols. 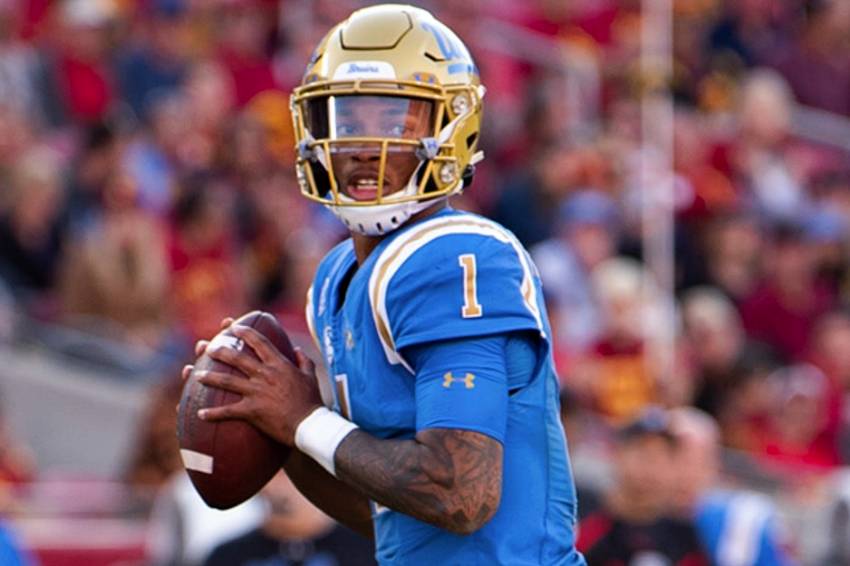 Ethan Garbers, whose brother Chase is the starting QB at California, arrives via the transfer portal from Washington to add depth behind Thompson-Robinson. Chase Griffin (5-11,184) made a pair of starts in Thompson’s absence and opened eyes after throwing four touchdown passes against Stanford in a wild 48-47 loss.

The Bruins have played with renewed hunger coming out of spring. Much of that was attributed to via transfers both old and new.

The positioned is further strengthened with Michigan transfer Zach Charbonnet. Injuries wiped out his 2020 season but the 6-2, 220 pounder is considered more of a physical, between-the-tackles runner. He tallied 729 yards and 11 touchdowns for the Wolverines in 2019.

Change of pace back Keegan Jones (5-10, 178) is more of a sprinter out of the backfield. He totaled 73 yards and a score, averaging just under 5 yards per carry last year.

The Bruins receiving corps is considered the best group in the Chip Kelly era. Sophomore slot Kyle Phillips (5’11-184) is the top target, after grabbing 38 balls for 370 yards and two touchdowns last season. He is the squad’s best route runner.

The primary Bruins target last season was sophomore tight end Greg Dulich (6-4, 242), who was the PAC-12’s second leading receiver with 26 catches for 517 yards and five touchdowns. UCLA will look for favorable matchups for him to challenge LSU linebackers and safeties.

Kelly feels that his offensive line is shaping up nicely entering 2021. They are not special from an elite talent viewpoint but the unit is just a hard working group. They total 73 career starts among the five first-stringers.

The leader is junior center Sam Marrazzo (6-3, 295), a former walk on. Left guard Paul Gratton (6-4, 300), a transfer from Villanova, enters his sixth season with 40 college starts including the past seven with UCLA. Sophomore tackles Sean Rhyan and Alec Anderson solidify the edges.

The defense is a blitzing group that will pressure from anywhere. Four of the top five tacklers return but play in a secondary that was subject to allowing big plays, ranking dead last in the conference allowing 274 passing yards per game.

Additional transfers have strengthened the backend of the Bruins defense though. Senior cornerback Obi Eboh (6-2, 193) arrived in the summer of 2020 and started five games after starting 12 for Stanford. Cameron Johnson (5-11, 182) is a senior transfer out of North Texas. Strong safety Jordan Genmark-Heath (6’1-225, Sr.) jumps on board from Notre Dame with 39 games of experience at both safety and linebacker. 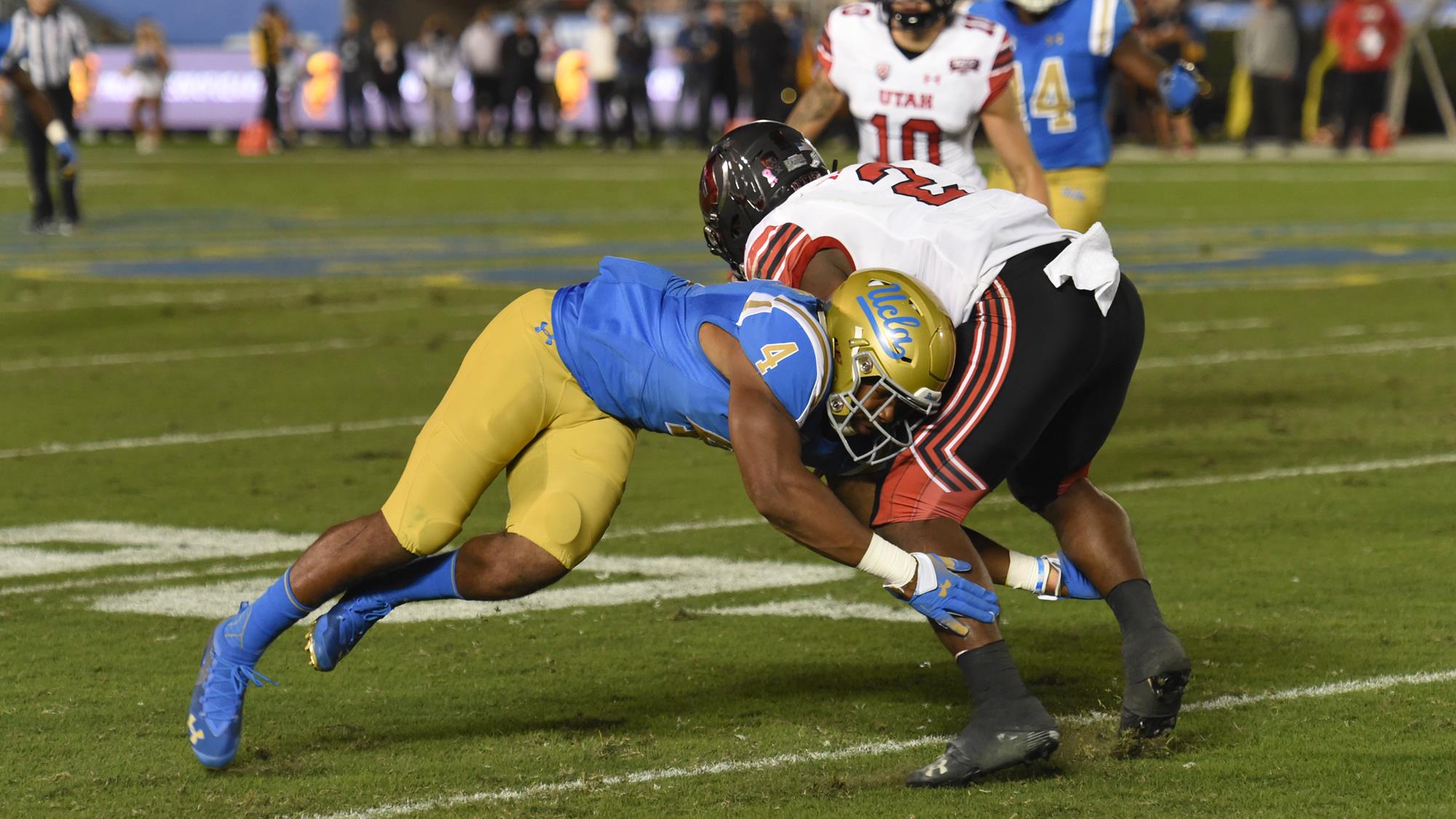 Stephan Blaylock (5-10,192, Jr.) is an active tackler with 42 stops plus a pair of picks from his safety spot. Nickelback Qwuantrezz Knight (6-0, 195, Sr.), who had 40 tackles last year, entering his sixth season after starting his college career at Kent State.

Nose tackle Otito Ogbonna (6-4, 318, Jr.)  is among the best at his position in the PAC-12. He does all of the dirty work, taking on blockers to keep Johnson and Calvert clean behind him.

LSU qualified for postseason play last season with a 5-5 record, but declined to play in a bowl last year. It marked the first time in 20 years the Tigers were not bowling. Like UCLA, a good start the to season feels crucial.

The game between Tigers and Bruins on September 4 could be an indication of what is to come in 2021. Kelly’s job could be at stake if LSU wins by a lopsided score. If the Bruins don’t show promise and collect wins on the way to a winning mark by mid-season, there could be a coaching change. Winning is expected and demanded at LSU so head coach Ed Orgeron knows a .500 record won’t cut it this year.

UCLA has had some historic names come through the football program. We mentioned already mentioned Carnell Lake, the five-time Pro Bowl safety.

Jackie Robinson lettered in baseball, football, basketball and track from 1939-’41. The American sports icon is the first in school history to play four sports.

Jersey #16 is retired because of QB Gary Beban, the only Heisman winner (1967) in school history.