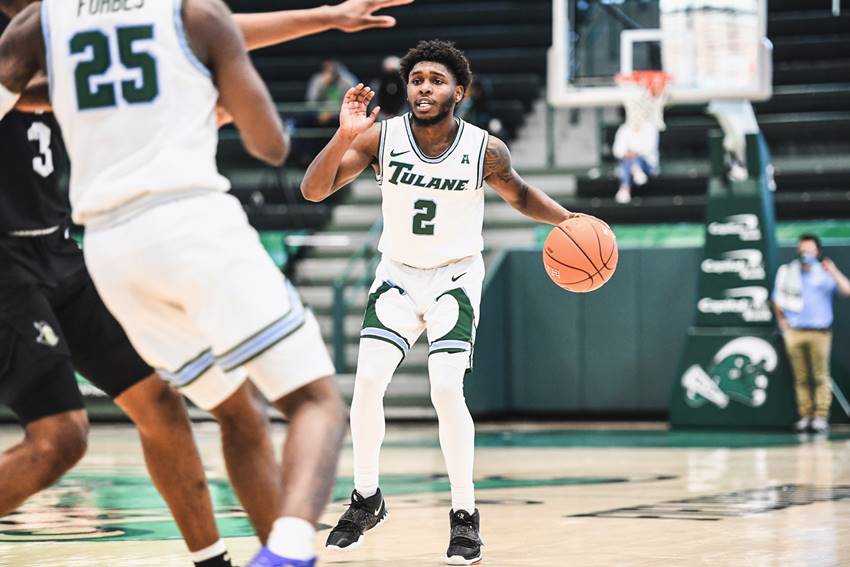 Forbes shot 8-of-13 overall, including 5-of-8 beyond the 3-point arc and 9-of-11 at the free throw line to complement a career-high five steals. Walker scored 18 points, made four treys and handed out a career-high 10 assists, while freshman Sion James and junior Gabe Watson added 13 points apiece.

The Green Wave scored the first eight points of the game which featured a pair of highlight dunks by Kevin Cross and James, as the Knights called timeout after the first six points of the run with 17:06 to go in the first half.

Tulane opened up an 18-7 lead on Forbes’ first 3-pointer which also accounted for Walker’s sixth assist on the team’s seventh made basket at the 12:13 mark. Forbes drained his second triple one minute later to keep the advantage in double-digits, 21-10, but UCF roared back with 12 straight points to take its first lead, 22-21, with 7:04 left.

The first half would feature 10 lead changes with the last coming on a Walker trey with 28 seconds to go to put the Green Wave in front, 37-36, heading into halftime.

Neither team pulled ahead by more than five points early in the second half, as Forbes netted a 3-pointer with 14:54 remaining to give the Green Wave a 53-48 edge. UCF punched back with a 23-7 run, which included a streak of 14 straight points, over the next seven minutes to build its largest lead of the game, 71-60, with 7:51 to go.

Tulane chipped away down the stretch and pulled within three, 77-74, on a Watson floater with 47 seconds remaining, as the Wave called their final timeout.

The Green Wave got as close as two, 83-81, on a fast break 3 – Forbes’ fifth of the game – with two seconds left but was forced to foul on the inbounds. The Knights made one of two free throws but left the Wave no time to get it back down the court for a last-second shot.

Up next, Tulane plays at Memphis on Wednesday, February 24. Tipoff is set for 7 p.m., at FedEx Forum and the game will be broadcast on ESPN+.