However, anyone who has laid close eyes on the way this team has been clicking on offense and defense throughout preseason camp and the first two games of the season knew this would be a lot closer than anyone expected.

And that it was.

Tulane accomplished a historic 17-10 win at Kansas State in a game that included new records and milestones.

Throw Your “Lower Level Competition” Narrative Out of the Window

This is a tough team to play, and Tulane demanded their respect. The result was the Green Wave’s first 3-0 start since 1998 and first victory over a Power 5 opponent since 2010. It’s the first such marquee win in head coach Willie Fritz’s tenure.

Jim Svoboda’s offensive plan has continued to work in his first season at Tulane. Struggles on third down (1-12) and two turnovers were blemishes but the offense came through in the second half to pull off the upset.

Beyond the rout of UMass and the shutout of Alcorn State, the defense has also shown match up with some of the best players in the country. The Wave contained highly touted running back Deuce Vaughn (more on that in a moment).

So Much For “The Deuce” Getting Loose

Vaughn is a versatile running back who stands a solid chance at being an early-round draft pick as an electric threat on the ground and a viable option through the air. But even with that, the Tulane defense had limited Vaughn to less than three yards per carry in the first half. The K-State star had 111 yards on 28 touches but did not score with a 26-yard run as the highlight of his day against a relentless Tulane defense.

The 5-foot-6 dynamo finished with 20 carries for 81 yards, an average of 4.1 yards per carry. That’s not a bad stat line, but Vaughn has shown against other heralded opponents just how lethal he can be with numbers much more impressive than what he could muster against the Wave.

“You’ve got a great back like Vaughn,” Fritz said after the game. “You’ve got to be smart with how you defend him, leverage him and tackle him. He’s a huge part of their offense so we needed to slow him down.” 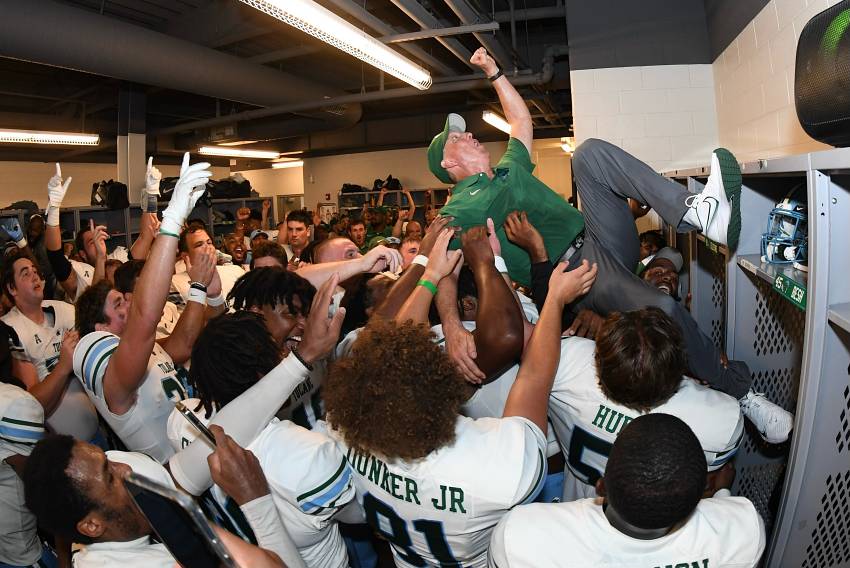 Tulane also kept veteran K-State quarterback Adrian Martinez honest, taking away the pass at many points in the game. He finished the contest 21-of-31 passing for 150 yards with one passing touchdown. The defense played staunchly on fourth down, forcing Kansas State to turn it over on downs four times.

Safety Macon Clark finished the game as the team’s leading tackler with six, all of which were solo. Anderson, who was among those who stepped up on the fourth-down stands, was tied with Williams for the second spot on the stat sheet, each six total tackles (five solo and one assist).

Chris Hampton has got a good thing going here, and his unit is going to be a force with which to be reckoned after a rough 2021 season.

Kansas State’s Defense is Formidable, But There’s Something To be Said About a Dual Threat Quarterback

The 3-3-5 defense is a tough one to go up against for any quarterback because it aims to take away the pass and often forces quarterbacks into mistakes. But despite the two interceptions Pratt threw, (one which Pratt said he didn’t see the backer on and the other in which the defender made a big play on the ball), Tulane still managed some big plays through the air. The junior distributed the ball to seven different passing targets, completing 13-of-26 passes for 176 yards with one rushing touchdown.

But the more important thing here that helped the offense in what was still largely a defensive struggle was Pratt’s mobility, one of the only things that can thoroughly unhinge a defense of this type. A quarterback who slips through the tackles with ease, runs with legitimate speed and is a consistent threat on the ground helps create positive moments out of seemingly nothing.

Tulane took the lead for good with a short touchdown pass by Pratt to tight end Tyrick James on a drive powered by the former’s legs.

The go-ahead score from Pratt to James

Pratt’s quarterback sneak on the fourth-and-1 in the final minutes iced the victory.

Pratt finished the game with a career-high 87 rushing yards. The performance followed up his multiple career-high performance through the air in the 52-0 win over Alcorn State.

“Confidence-wise, one thing that really restricts people is when they have any doubt in their mind. Winning this ball game, putting no doubt in anybody’s mind that we can compete with anybody that we play,” Pratt said. “We’re going to go to Houston and we’re going to play some tough ball teams, especially in our division. We can compete with anybody there is and I think we proved that.”

Confidence comes from success. Clearly, the 3-0 Green Wave has already built up plenty of confidence.

Crissy Froyd is a sports reporter of roughly nine years who graduated from LSU and has spent time at USA TODAY SMG, NBC Sports and the Fan Nation network on Sports Illustrated. She specializes in quarterback analysis and covers the SEC and college football across the state of Louisiana in addition to working with several college quarterbacks across the nation.