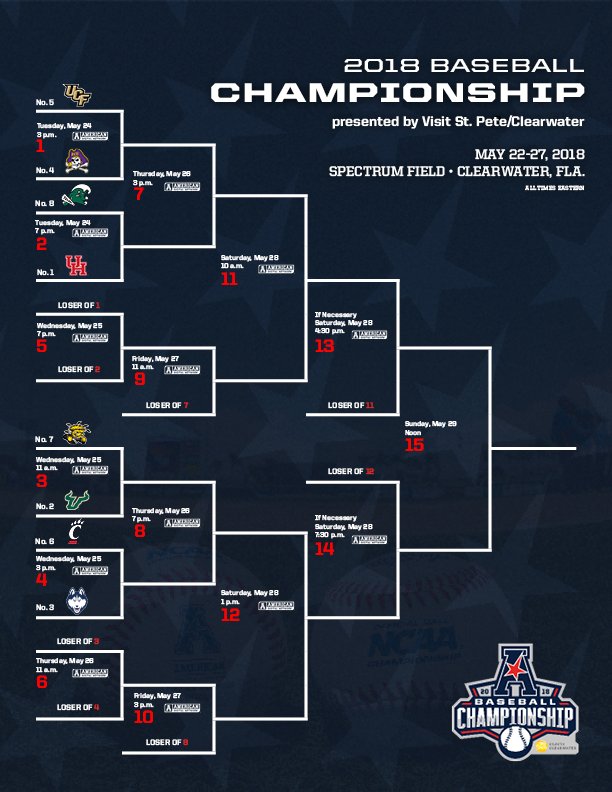 The eighth-seeded Green Wave (24-31, 9-14 American) and top-seeded Cougars (33-21, 16-8 American) will play at 6 p.m. CT Tuesday, and the game will be broadcast on the American Digital Network via Facebook Live. Tulane and Houston are joined in their half of the bracket by fourth-seeded ECU and fifth-seeded UCF, which play at 2 p.m. CT. The winners will meet on Thursday, while the losing teams face an elimination game on Wednesday.

The tournament is an eight-team double elimination format through the semifinal round, and the championship game is a winner-take-all final. Live coverage of the first five days of the championship will be provided by the American Digital Network Plus, the conference’s new home for live events on the Facebook platform. The May 27 final will be televised at 11 a.m. CT on ESPNews.

Tulane won two of three games from Houston at home this season, April 13-15, in New Orleans. The Green Wave won 17-16 on Friday, coming back from down 10-runs in the sixth inning to win in the ninth, then claimed the first game of Sunday’s doubleheader, 2-0. The Cougars captured the series finale, 5-3.

The second half of the field opens the tournament on Wednesday. Second-seeded USF plays the seventh-seed Wichita State, and third-seeded UConn plays sixth-seeded Cincinnati.