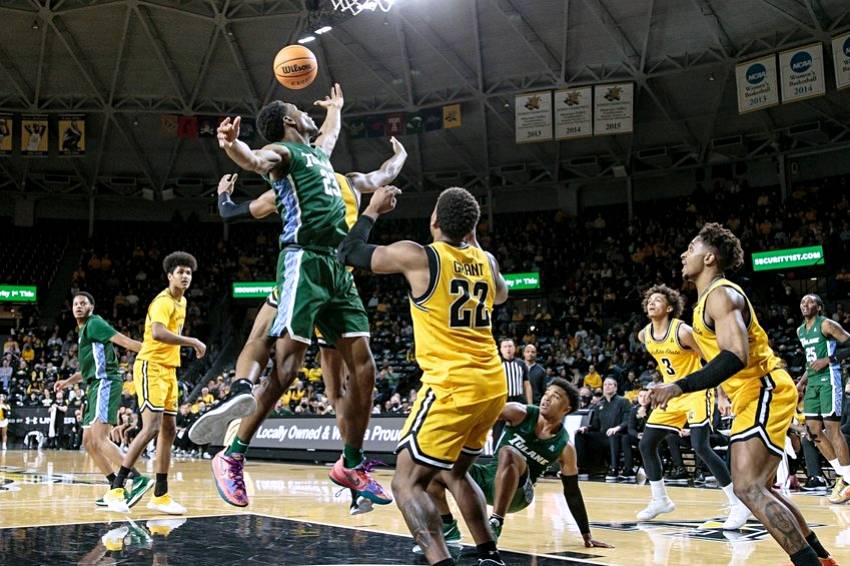 WICHITA, Kansas – Tulane University sophomore guard Jaylen Forbes scored 16 of his team-best 20 points in the second half to guide the Green Wave to a thrilling 68-67 come-from-behind win over Wichita State Wednesday night at Charles Koch Arena.

Tulane’s win over the Shockers was the program’s first ever victory over Wichita State. The win also improved Tulane to 4-1 in American Athletic Conference play and moved Tulane back to .500 on the year (7-7).

Joining Forbes in double figures were Jalen Cook, Sion James, Kevin Cross and DeVon Baker, as they finished with 18, 10, 10 and 10 points, respectively.

Tulane’s one-point advantage was its first lead of the night. From that point, the lead would change hands eight more times for the remainder of the game.

In the final four minutes of the game, both defenses clamped down, as the two teams combined for just four points. The biggest defensive play came from sophomore Nobal Days, as he took a charge on the Shockers’ final possession to give the Green Wave the ball with less than a second remaining and preserve the win.

Tulane’s 16-point deficit was the team’s first double-digit come-from-behind win on the road since its 2016 matchup at ECU.

The Green Wave finished the second half connecting at a 58.3 percent clip from the field and finished the game with a 46.3 shooting percentage.

Wichita State jumped out to an early 13-point lead at the 12:31 mark (20-7) of the first half, but the Green Wave charged back to close the Shockers lead to five (22-17) with 8:15 to go until the break. Baker led the way during with five points during the Green Wave’s 10-2 push during the five-minute stretch.

Six minutes later, the Shockers pushed their lead back to double digits as they opened up a 16-point lead with 2:35 remaining in the first half.

UP NEXT
Tulane returns to action on Saturday (Jan. 15) where it will welcome SMU. Tipoff is set for 1 p.m. CT and will be aired live on ESPN+.