Tulane looks to stay hot Saturday at home against SMU 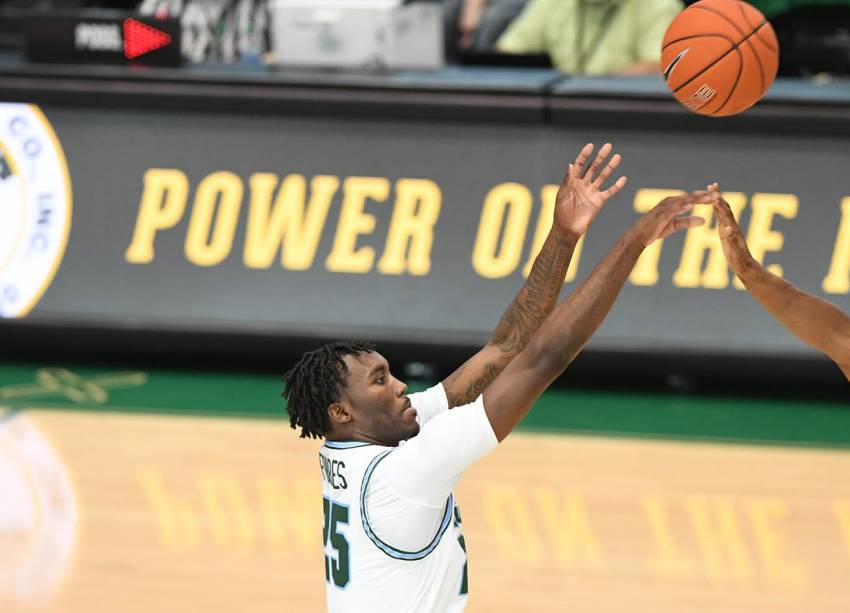 Tipoff is set for 1 p.m. CT and can be seen live on ESPN+

NEW ORLEANS – The Tulane University men’s basketball team returns to action on Saturday at 1 p.m. CT, as it faces off against the SMU Mustangs for an American Athletic Conference matchup.

STARTING FIVE
1. Tulane’s home contest with SMU will mark the first time since the 2019-20 campaign that the two teams will face off against one another. Both meetings last season were cancelled due to COVID-19.
2. The Green Wave enters their meeting with SMU in the hopes of continuing their momentum following a thrilling come-from-behind win over Wichita State this past Wednesday on the road. The Green Wave will look to improve to 5-1 in league play for the first time ever since joining the American Athletic Conference for the start of the 2014-15 campaign.
3. Tulane will look to capture its third straight win in league play. The Green Wave have NEVER won three straight AAC games. The last time Tulane won three straight conference games in any league was back in 2009 while competing in Conference USA.
4. This season, head coach Ron Hunter’s staff welcomes back six letterwinners, six newcomers and three starters, including preseason All-American Athletic Conference honoree Jaylen Forbes. Forbes is one of three players on the team, averaging 10-or-more points per game. Freshman Jalen Cook leads the team with 19.3 points per game – a figure that ranks second in the American Athletic Conference. As a team, Tulane is averaging 72.7 points per game and connecting at a 44.5 percent clip.
5. The Green Wave have won the turnover battle in 11 of their 14 games this season. During the 2020-21 campaign, Tulane won the turnover battle in 19 of its 23 contests last season while also forcing opponents into at least 15 mishaps on 11 occasions. During the 2019-20 campaign, the Green Wave committed equal or fewer turnovers than its opponents in 28 of 30 contests while ranking in the top 15 nationally in turnover margin (+4.3).

THE SERIES
• Tulane’s matchup with SMU will mark the 40th all-time meeting between the two teams.
• The two teams met for the first time in program history back on Dec. 18, 1959. In that game, the Green Wave dropped a 86-61 decision to SMU.
• Green Wave head coach Ron Hunter is 1-1 all-time against SMU.

TULANE BY THE NUMBERS
240 ¬- Tulane has made at least one 3-point field goal in 240 consecutive games. The last time the Green Wave failed to do so came on Jan. 16, 2014 at home against Louisiana Tech when they went 0-for-14 from outside.

54.8 – Forward Kevin Cross leads the American Athletic Conference in field goal percentage connecting at a 54.8 percent rate from the floor.

10 – Tulane’s meeting with SMU marks the 10th opponent the Green Wave have faced this season that has a .500 record or better.

4 – The Green Wave picked up their fourth league win of the year this past Wednesday at Wichita State which equals its conference win total from a year ago.

3 – Tulane’s 36.3 shooting percentage from 3-point range is third in the American.

1 – For the first time in program history, Tulane has defeated Memphis, Cincinnati and Wichita State all in the same season.

THE OPPONENT – SMU
• The Mustangs enter their matchup with Tulane after they defeated USF 77-65 at home this past Wednesday
• In the win over USF, Zhuric Phelps, Kendric Davis and Marcus Weathers each scored 17 points.
• SMU enters its matchup with Tulane having won nine of its last 10 games. In addition, SMU is a perfect 10-0 at home, but has split on the road, going 2-2.
• Davis leads the team in scoring, averaging 20.9 points per game. His 20.9 ppg is ranked 11th in the NCAA. He also ranks in the league’s top five in free-throw percentage, field-goal percentage, assists and assists-to-turnover ratio.
• Davis was unanimously selected as a preseason All-American Athletic Conference First Team member. He also was named to the Naismith Trophy Watch List.
• As a team, SMU leads the American in 3-pointers made and ranks second in 3-point field goal percentage. The Mustangs are also averaging 77.1 points per game – a figure that ranks third in the AAC.
• Head coach Tim Jankovich is in his sixth year on the bench for the Mustangs. Prior to this season, Jankovich has guided the Mustangs to four winning seasons, including a 30-5 campaign during the 2016-17 season.
• SMU was picked to finish third in the AAC Preseason Poll.

LAST TIME OUT: Green Wave Rally Past Wichita State, 68-67
• Tulane University sophomore guard Jaylen Forbes scored 16 of his team-best 20 points in the second half to guide the Green Wave to a thrilling 68-67 come-from-behind win over Wichita State Wednesday night at Charles Koch Arena.
• Tulane’s win over the Shockers was the program’s first ever victory over Wichita State. The win also improved Tulane to 4-1 in American Athletic Conference play and moved Tulane back to .500 on the year (7-7).
• Joining Forbes in double figures were Jalen Cook, Sion James, Kevin Cross and DeVon Baker, as they finished with 18, 10, 10 and 10 points, respectively.
• Trailing by as many as 16 points in the game, the Green Wave showed no quit, as they utilized a 19-6 second half run to take a 60-59 lead with 7:20 remaining in the game.
• Tulane’s one-point advantage was its first lead of the night. From that point, the lead would change hands eight more times for the remainder of the game.
• In the final four minutes of the game, both defenses clamped down, as the two teams combined for just four points. The biggest defensive play came from sophomore Nobal Days, as he took a charge on the Shockers’ final possession to give the Green Wave the ball with less than a second remaining and preserve the win.

COOK MAKES IMMEDIATE IMPACT
• Freshman Jalen Cook has been named to the American Athletic Conference Honor Roll twice this season, earning a spot on Nov. 15 and Nov. 22. Most recently, Cook was selected as the AAC Player of the Week and Louisiana Sports Writers Association Player of the Week on Jan. 3.
• Cook currently ranks second in the American Athletic Conference with 19.3 points per game.
• Cook shined at home in the Green Wave’s league opener, as he poured in 25 points against Memphis.
• In his last outing, Cook was scored 18 points against Wichita State.
• Earlier this year, Cook was selected to the Baha Mar Hoops Nassau Championship All-Tournament Team.

FORBES’ THE FLAMETHROWER
• In his two outings from Nov. 29 – Dec. 5, sophomore Jaylen Forbes averaged 22.5 points per game, a figure which ranked second in the American Athletic Conference. On Dec. 6, Forbes was selected to the AAC Weekly Honor Roll.
• Forbes currently leads the American in minutes played, averaging 35.3 per game.
• Forbes poured in 24 points in an overtime loss at ECU. Most recently at Wichita State, he helped Tulane to its first ever win over the Shockers, as he scored 16 of his team-best 20 points in the second half.
• Earlier this season against Drexel, Forbes poured in a season-high 30 points in the Green Wave’s 90-87 win.
• Last season, he poured in a career-high 37 points on 9-of-15 shooting and made his first seven attempts from 3-point range while going 12-of-15 at the free throw line at Cincinnati on Feb. 26, 2021. The Florence, Mississippi, native’s 37 points are the most by a Green Wave player in a regulation game since Jerald Honeycutt had 38 against Xavier on Jan. 16, 1997.
• His seven treys are tied for the second most in a single game in program history with Cameron Reynolds being the last to make seven against Alcorn State in November 2017.

A CALL TO THE HALL
• Tulane University men’s basketball associate head coach Ray McCallum was named to the 2022 Men’s Induction class this week by the Indiana Basketball Hall of Fame.
• McCallum, who has served as the Green Wave’s associate head coach since the start of the 2019-20 campaign, received the Hall of Fame nod after he posted a standout career during his time as a high school player, a collegiate student-athlete and his contributions as a head coach.

UP NEXT
• Tulane returns to action on Saturday (Jan. 22) where it will head to UCF. Tipoff is set for 1 p.m. CT and will be aired live on ESPN+.