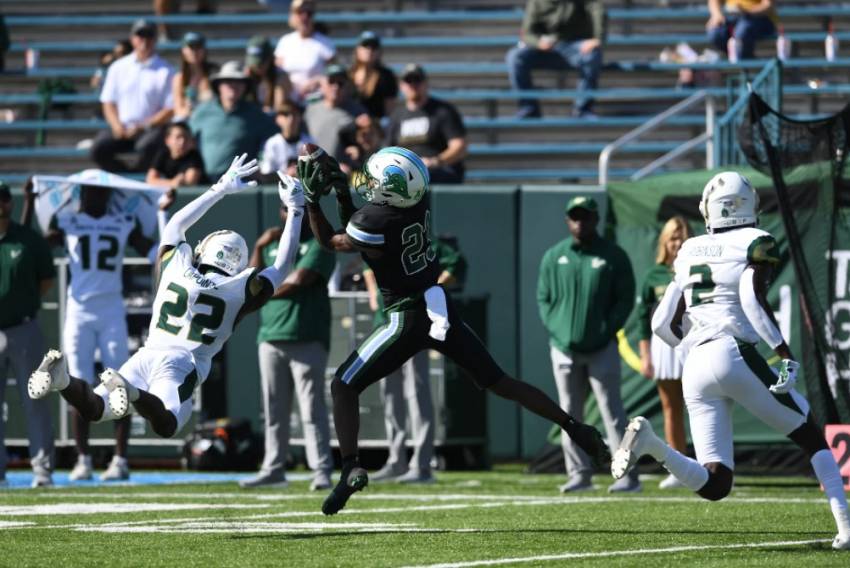 It was a welcome relief to see Tulane finally play well for an entire game, starting well, finishing and, finally, victorious in the midst of a failed season.

It will be a welcome relief to see LSU finally play its final game next week, to end a failed season in every aspect.

Tulane started fast and polished off USF 45-14 on a beautiful Senior Day at Yulman Stadium.

Michael Pratt was perfect for a while and Tulane was near perfect offensive for a while.

Pratt finished 19-of-34 for a career-high 311 yards and three touchdowns.

Pratt has been beat up, tossed around and has little support with below average play from his offensive line and receivers. He is a tough character and a has outstanding character and deserves more support.

On Saturday, he got it, once again, from Tyjae Spears, who has emerged to be a star, as we expected.

South Florida scored actually led 7-0 and did not score again until scoring the final touchdown of the game as Tulane racked up 45 unanswered points.

Yes, Tulane is a bad team but was a good team on this day and it was encouraging, coming off a totally discouraging loss in a game the Green Wave blew against Tulsa.

It was good for Tulane seniors who enjoyed a final home outing to remember an otherwise forgettable season.

The past year’s successes will not be forgotten either. Those seniors were part of rebuilding a program which went to three bowl games, the first to do so in program history.

Next up is the finale at Memphis, an unlikely place to win but Saturday’s victory allowed Tulane to avoid tying its second worst season in program history.

In Baton Rouge, let’s give a huge amount of credit to ULM.

Terry Bowden has done a simply outstanding job with a moribund program, leading the Warhawks to four victories in his first season in charge after ULM was winless in 2020.

The Warhawks played hard and for a sizeable period of the game, matched LSU at the line of scrimmage and made the Tigers work for a 27-14 win.

Max Johnson made enough plays for the Tigers to win, accounting for three touchdowns.

This time, the result was positive.

Regardless of Garrett Nussmeier redshirting, Johnson and, for that matter, Nussmeier, will have to audition and prove themselves all over again to whomever the new coach is at LSU.

LSU was totally ineffective in blocking the ULM front, rushing for just 92 yards.

Jay Ward had an interception and Damone Clark was his usually excellent self with seven tackles, including 1 ½ for loss.

Still, for LSU to struggle to win at home against a seriously outmanned, out-talented visitor reflects how poorly the Tigers were and how poorly things have gone this season.

LSU finally won a game after the announcement that Ed Orgeron would not return in 2022.

The press conference to announce that decision was wonky, at best and the timing was awkward.

The decision to allow Orgeron to finish it out was out of respect for a man that guided LSU to its best season ever.

That decision is certainly open to question, given the way LSU has performed, even though its defense under Daronte Jones has clearly improved in scheme and in performance.

Next up is the drama with Texas A&M and the whole Jimbo Fisher question.

LSU and A&M have grown to hate each other in recent years and A&M is directly recruiting in Louisiana against LSU for key athletes.

Many people have Jimbo fatigue when it comes to links to the LSU job, dating back to 2015.

Then again, it may be better if that does not happen and Fisher sticks to his word.

The Louisiana Ragin’ Cajuns were very impressive Saturday in a win over Liberty go get to 10-1 on the season, the third straight year Napier has led his team to 10 or more wins.

Billy Napier is young, dynamic, a winner and with a resume that includes work under Dabo Swinney and Nick Saban.

Mel Tucker’s Michigan State team was destroyed by Ohio State and he is on the verge of signing his new lucrative deal.

Lincoln Riley’s Oklahoma team got a needed win and he may be the favorite in the clubhouse for the job.

Of course, there could be a serious candidate the hasn’t even hit the rumor mill.

That is the drama remaining in this very forgettable LSU football season which cannot end soon enough.