TULANE RETURNS HOME; WELCOMES MISSOURI STATE
-The Green Wave welcomes Missouri State to Yulman Stadium on Saturday at 7 p.m. The game will be aired live on the ESPN3.
-Tulane’s matchup with Missouri State will mark the first all-time meeting between the two teams.
-Tulane has won its last 15 games against teams from the Football Championship Subdivision (FCS).
-Teams from the American Athletic Conference are a perfect 7-0 against teams from the FCS this season.

FIRST AND 10
1. The Green Wave will be in search of just their second 2-0 start at home since 2000.
2. The last time Tulane opened the year 2-0 at home was in 2017.
3. Senior quarterback Justin McMillan is a perfect 3-0 as a starter in home games.
4. Senior wide receiver Darnell Mooney has caught at least one pass in 20 consecutive games.
5. Tulane has won six of its last eight games dating back to last year.
6. Junior defensive lineman Patrick Johnson has earned at least half a sack in 10 of his last 12 games dating back to last season.
7. Tulane has rushed for at least 100 yards in 42 consecutive games dating back to the end of the 2015 season. The Green Wave had 120 rushing yards last week at Auburn.
8. Tulane’s 42-point outburst against FIU marked the second straight game in which the Green Wave have surpassed 40 points. The last time Tulane posted back-to-back 40-point games was in 2012.
9. The Green Wave enters their matchup with Missouri State having rushed for over 300 yards in two of the last three games (337 vs. UL-Lafayette and 350 vs. FIU).
10. Tulane leads The American in turnover margin and ranks 21st nationally.

SCOUTING MISSOURI STATE
• The Bears will come to Yulman Stadium for their second game of the 2019 season.
• Missouri State’s senior long snapper Chandler Collins was tabbed as a STATS Inc. 2019 FCS Preseason Third Team All-American.
• The Bears’ defense is led by three preseason All-Missouri Valley Football Conference picks in linebackers Angelo Garbutt, McNeece Egbim and Matt McClellan.
• Missouri State lost its season opener at Northern Arizona, 37-23.
• Garbutt was the defensive leader in the Bears’ first game with 10 total tackles.
• Senior quarterback Peyton Husling led the Bears with 289 passing yards and two touchdowns in the loss at Northern Arizona.
• Senior wide receiver Tyler Currie was tops on the team with six receptions, 89 yards and one touchdown in the Bears’ first game of the season.

Listed below is the complete transcript from Green Wave head coach Willie Fritz’s weekly press conference leading up to Tulane’s matchup vs. Missouri State on Saturday.

Tulane Head Coach Willie Fritz
Opening Statement…
“I appreciate everyone coming out. It was a tough ball game last Saturday. I was really proud of our effort. I thought the guys fought throughout the whole game, but we did not play as crisp as we need to when you play the number eight team in the country. I thought we tackled extremely well, I thought we really did a good job playing with leverage particularly through the first three quarters defensively. I think, we gave them twenty yards rushing in the first half against a team who runs the ball on a lot of people. Offensively, we were really close, but we kept shooting ourselves in the foot too with penalties that put us behind the chains and missed assignments at times at the point of attack. When you play a team that is one of the better defensive teams in the country, that is not going to help you. It is going to cause you not to be successful. We did do a good job in the kicking game. We did a good job covering kicks and had some good punt returns against them. Proud that we went toe-to-toe to them, but our goal is not to go toe-to-toe, our goal is to win a game like that. Did that give us some confidence? I think in some regards it did, but our guys were highly disappointed after the ball game, as well as they should be, because we could have played a lot better than we did last Saturday.”

On the flea flicker vs. Auburn…
“Well, all of the sudden we are going to go for two in that instance. That’s fourteen-fourteen and things are looking a little better and, I think, we surprised ourselves probably by being able to run the ball as effectively as we did. We probably needed to stay with that a little bit more. Obviously, a big matchup and the thing for them [Auburn] was that they did a really good job in their secondary with tight coverage and not giving small windows for our quarterbacks and receivers. When you do have those windows, you have to catch balls and I think we had five drops that could have been big plays. We just have to play much more sharp than what we did against them.”

On building a strong, reliable defensive every season…
“I think so. We have a good style of defense, I really do feel. We have a very multiple package. We have a very multiple package offensively too, but when you have that, you have to be on point. There were a couple points in substitution that hurt us in the game with them running guys on and running guys off. How they administered it was a little bit different than how we get it administered in the American, but you have to be able to understand that and play with it.”

On that administration more specifically…
“They were running off and we were looking at the iron cross and the official and I thought we bought a timeout one time, but I guess we did not, the ball had not been snapped. That’s how they call it and you have to be able to play it that way in those situations.”

On time to matchup…
“They always give you time to matchup and we did matchup quite often, but there were sometimes that guys were coming on and then they were coming back off. You get it with the matching stuff, are they really going to let you match? It is almost a leap of faith and when the guy extends his arms and you said your guy is out there and he is going to see it, but sometimes where we were at on the field he could not see us coming on the field. The guy giving the signal had his back turned to us because he was watching the football. That is the part where you just have to do it and if you get a penalty, you get a penalty. Hopefully they don’t call it and that is something we have done a pretty nice job of. It is so important and a reason why they are changing personnel because you want to get the best matchup you can for the play call they have. We would like to get the best play call we can with the guys who can play that personnel group. I really feel like we played well defensively through the first three quarters and did an excellent job.”

On change in offensive and whether this will help with recruiting receivers…
“I think it will. That’s a good question. We use the whole field. We have a great offense and I am not a guy who pushes the Pro deal all the time and a lot of coaches that is all they talk about is guys playing in the NFL. Go Saints, by the way, that was a heck of a game last night. It is a style of play that a guy can move onto the next level whether it is offensive line, a tight end, a back, a receiver, a quarterback. So, I think that is good and kids like seeing that. They like seeing the ball distributed among a bunch of guys. You have to take advantage of running the whole field and, if you are just going to play a couple people, you have to be better than that.

On what this game against Auburn means for improvement…
“I think if you watched the game you could see we had a lot of chances. I think anytime you play on a national platform like that it helps your program out. We are just kind of disappointed. We have moved on. I know coming in on a Tuesday we talk about that, but you think about two weeks ago and we have worked like crazy since that point. I think we have to move on. That was a game we wanted to win and that is what we went there for. We had our chances and we did not take advantage of it.”

On Missouri State…
“They have had two weeks to prepare for us. I think they will be a little different than what they have done in the past. They have a new coordinator on offense, he did a few different things in game one that they had not shown last season. I know their head coach, coach Steckel, out of Mizzou and Central Missouri. I have a lot of respect for him and I know a lot of guys on their staff. When I was coaching I-AA football, this was big, when you had an opportunity to go play a Division I program, you were really pointed towards that game to show what a good football player you are.”

On moving forward…
“We stressed it yesterday. We are not going to do anything different, hopefully if you come out and watch us practice you will see we are having the same energy and bringing it every single week. Our kids are not going to see anything different from me or my coaches. We just want improvement and after the ball game I heard guys talking about this season and I said do not worry about that, just think about us being 1-0 this week.” 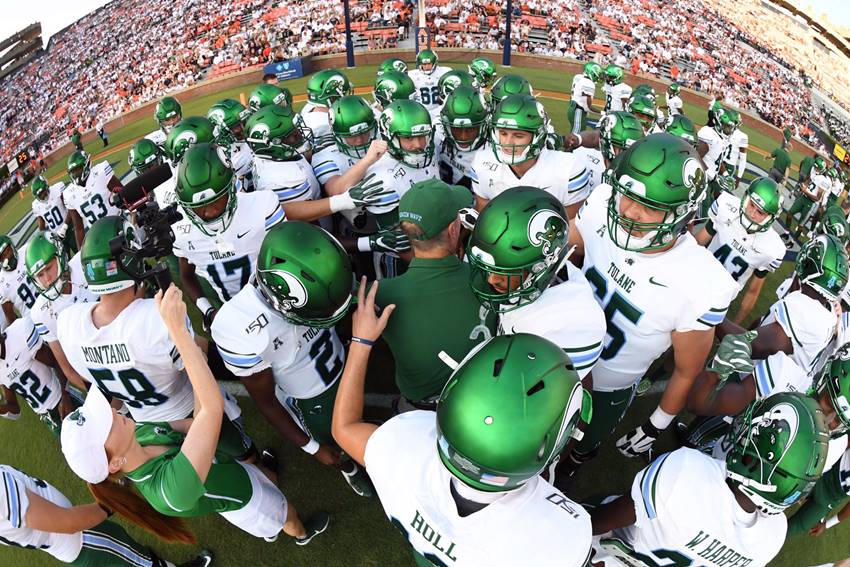 The Green Wave are 1-1 on the season heading into Saturday's home game versus an FCS foe.