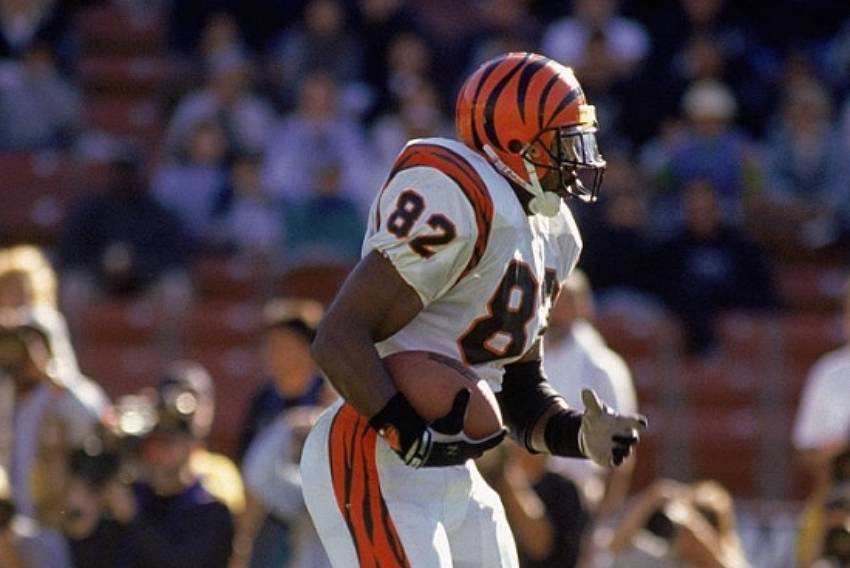 The 6-foot-3, 238-pound tight end was a stalwart for 11 years with the Cincinnati Bengals before spending his final three pro campaigns as a teammate of running back Barry Sanders in Detroit.

Holman landed in the Big Easy in 1978 at the start of a four-year college football run with the Tulane Greecatches in 1979 are still the most in a single season for a tight end in Green Wave history.

However, it did not appear at first to Holman that he would even play that position.

“I arrived at 194 pounds and soon grew to 206,” recalled Holman. “I thought they’d move me to the secondary since I had played outside linebacker in high school and could back pedal.”

The freshman exhibited toughness and resilience. He had been a two-time undefeated wrestling champion in Ypsilanti, Michigan in the 191-pound class. Holman was meant to battle on the line of scrimmage.

As for his college choice, he was drawn to the Willow Street campus due to the personal involvement on the academic side.

“I cam here to play early, but I liked the teacher-to-student ratio. I grew up eight miles from the University of Michigan campus, but the classes were full of students. There was more personal attention at Tulane.”

Holman developed as a player under the watchful eyes of a pair of futyre NFL coaches, Green Wave offensive coordinator Lindy Infante, who was replaced by Ken Meyer.

“It was strict, working on fundamentals. Keep your eyes on the ball, over the shoulder catches, hand placement, palms up.”

Rodney learned a lesson in his first college season that stayed with him the remainder of his football days. Tulane was on the road against Vanderbilt. He had a good game with four catches, and the Wave left with a 38-3 win. However, Holman earned an early shower due to his temper.

“I could block, but had a short fuse. I got into a fight and got kicked out of the game. It never happened again.”

In the 1982 NFL draft, Holman was chosen in the third round by the Bengals. He received the news from a familiar voice. Infante had become the offensive coordinator in Cincy.

“He called to tell me that the Bengals had taken me. It was great news. I was excited.”

Holman served an internship behind veteran Dan Ross before gaining his footing in 1984 and a starter’s role in ’85.

Sam Wyche was a player’s coach in every sense of the word.” He di It made the atmospehre develop into a family feel.

“Sam used a roommate chart and mixed blacks and whites, offensive linemen and running backs. It didn’t matter. There was a camaraderie formed. Sam would throw me passes everyday after practice,” Holman explained. “Me and Anthony Munoz would run two miles before practice. We wanted to be ready for the fourth quarter when we would jog to the opposite end of the field. We were fresh. People noticed.”

There were similarities between the ’88 Bengals who headed for Super Bowl XXIII and this year’s Cincinnati squad now preparing for Super Bowl LVI. Both had mountains to climb when few thought they were good enough to become AFC champions.

“We felt like our necks were on the line ,” Rodney recalled. “We started off winning six consecutive before being destroyed by Doug Flutie and the Patriots. It woke us up. We split that season with Warren Moon and Houston. Usually three teams made the playoffs. It was always a competitive division (the old AFC Central).”

The 1988 Bengals featured Eddie Brown (1,273 yards and 9 TD’s) and Tim McGee (686 yards and 6 TD’s) along with Holman who added 39 catches for 527 yards and three scores. Holman’s numbers, although modest by today’s standards, slotted him third among NFL tight ends that year. He was on the receiving end of many passes by Boomer Esiason, the 1988 NFL MVP.

“No one had hands like Eddie Brown,” Holman stressed. “He was a pure pass catcher. He never wore gloves. He caught with his hands. He could make the first man miss. DB’s can’t get their hands on receivers as much now.”

“The game has changed. I had to block defensive end like Chris Dolman and Reggie White.”

While today’s Bengals feature a Pro Bowl feature back in Joe Mixon who has tallied 1,205 yards and 13 scores plus the versatile Samaje Perine who has chipped in 246 yards and a score rushing plus his receiving skills, Holman’s Bengals had a dual attack that took the league by storm. The combo of speedster James Brooks and battering ram, Ickey Woods complemented a fast-paced passing attack.

“James was pound-for-pound one of the hardest runners in the game,” Holman said. “He could also catch. We developed a pact. He and I would put our goals on our lockers each year to make the Pro Bowl. We challenged one another.”

Woods is well-known for his post-touchdown “Ickey Shuffle” celebration that became a national phenomenon during Cincinnati’s Super Bowl run.

“Everyone gravitated to it,” Holman said. “Even the DB’s got involved. Paul Brown (Cincinnati’s 80-year old woner) didn’t initially like it, but he eventually did it, too. Everyone went berserk!”

Like Esiason for Holman’s teams, Cincinnati is now powered by a surging quarterback. Joe Burrow, the second year signal caller and the former LSU 2019 Heisman winner, has rebounded off of reconstructive knee surgery 13 months ago. He has been sacked an NFL most 51 times this season, yet raised the level of play across the board for the entire franchise.

“Those 51 sacks, that is tough,” Holman stated. “I’ve seen good QB’s crumble under that. He plays with confidence. Not loud, not boisterous. In just two seasons, he has done a great job. He commands that offense. He’s personable. Even as a rookie, he spoke his mind, showed great maturity. He doesn’t get rattled. He stands behind what he says. Joe is unique. He can handle pressure. The national championship game against Clemson was exactly the same as the (AFC title) game against the Chiefs. He plays like a seven-year veteran. He commands respect.”

As for the hype of a Super Bowl, Holman stressed that every participant makes sure to handle potential distractions.

“Get the (game) ticket business out of the way,” Rodney recommended. “Let someone else handle it. Players don’t need to be dealing with that. Nothing but be focused on the game. You have everyone calling you. Block out the noise. Don’t miss curfew.”

Holman will be in attendance at Super Bowl XLVI as a Bengals fan.

“I have confidence they can win the game.”

Holman’s team came so close in his trip to the big game. Maybe now is Cincy’s time.

NOTES: Cincinnati is one of 12 NFL teams still seeking the first Super Bowl ring for the franchise.

This year’s big game features many players with Louisiana ties, and the Bengals have most of them: