For nearly 40 minutes, Tulane looked the part of the team we saw against Oklahoma in the season opener and for much of the previous three seasons.

The Green Wave competed very well against a superior team, even holding the lead against Houston early in the second half Thursday night in front of a national audience on ESPN.

Then, talent took over.

Simply put, the game got too long for the inferior team as Houston pulled away for a 40-22 victory at Yulman Stadium.

The game presented a clear view of where the Tulane football team is right now.

Two years ago, a more talented Houston team came to Yulman Stadium and departed with an upset loss as the Green Wave prevailed 38-31 as Justin McMillan hit Jalen McCleskey with a 53-yard touchdown pass with three seconds left to provide perhaps the most thrilling victory of the Willie Fritz era.

The Green Wave won that game despite allowing 533 yards to Houston by amassing 511 yards and 38 points.

In fact, Tulane overcame 12 penalties for 82 yards, still finding a way to win.

This year’s meeting closely resembled the 2020 game between the two American Athletic Conference rivals at Houston where Tulane shocked the Cougars, jumping out to a 24-7 second quarter lead. The Green Wave still led 31-28 with under six minutes to play in the third quarter before Houston scored the final 21 points to take a 49-31 victory.

When facing a superior opponent, you have to be daring, unconventional.

That was certainly the case for Fritz, who went for it five times on fourth down, converting just twice.

It was the right thing to do, despite the fact that the Cougars opened the game up after one of the failed conversions.

It looked like the Cougars would blow the Green Wave right out of Yulman Stadium, dominating early to take a 14-0 lead but Tulane showed toughness in fighting back to take the lead in the third quarter.

With its 22-17 lead, Tulane had gotten a stop and had the ball in Houston territory when Pratt was pressured, sacked, fumbled and D’Anthony Jones recovered at the Tulane 35.

To the credit of the Green Wave defense, Houston managed just a field goal to cut the deficit to 22-20 but the game turned at that point as the Cougars dominated the rest of the way.

The Cougars simply ran over the Green Wave offensive line, sacking Michael Pratt eight times while pressuring and hitting him on numerous other occasions.

It was much the same as the 2020 game at Houston, when the Cougars mauled the Tulane offensive line, sacked Pratt six times and and knocked the signal caller around all night.

Although he is thankfully one tough dude, Pratt took a beating Thursday night as he has all season long. With backup Justin Ibieta out injured, it is of paramount importance that the second-yaer starter remain healthy.

Pratt did all he could, completing 20-of-30 passes for 214 yards and two touchdowns.

Tulane missed an opportunity earlier, dropping a clear pix-six opportunity on a ball that should have been caught.

Against a better team, you have to make those plays.

The Cougars did not cover Tulane tight ends all night and that was the biggest part of the offensive success for Pratt and the Green Wave as Tyrick James and Will Wallace, wide open in space, each caught a touchdown pass.

While Tyjae Spears broke free on a 39-yard touchdown run, the Green Wave run game, which Fritz has hung his hat on throughout his tenure, fell short yet again as Tulane rushed for just 65 yards.

Additionally, one player who was thought to be important to making the run game go is now gone.

Former Covington star Devin Brumfield, who transferred to Tulane from Utah, announced he is entering the transfer portal.

Brumfield never really figured in the offensive plans, rushing just 14 times for 97 yards in four games, much of it in mop-up duty.

Now 1-5 and 0-2 in American Athletic Conference play, Tulane is staring an almost certain losing season squarely in the face, well on its way to ending its streak of three straight bowl game appearances. The 1-5 record is the worst start since 2012.

Where is the previously tough, productive running game of Fritz and first-year offensive coordinator Chip Long?

Against Oklahoma, Tulane rushed for just 100 yards. Against Ole Miss, the Green Wave had 139 yards rushing.

Those are national-ranked Power 5 programs so some leeway can be given.

Against UAB, Tulane mustered just 90 yards rushing. At East Carolina, the Green Wave had a modest 124 yards rushing. Against Houston, Tulane had just 94 yards on the ground.

The math does not lie.

In five losses, Tulane has averaged a paltry 109.4 yards rushing per game.

Of course, LSU and its anemic run game would be proud of that number but that is far, far short of where Tulane has been under Fritz. It’s also nowhere close to where it needs to be for the Wave win and to keep the anemic defense of first-year coordinator Chris Hampton off the field.

With an offense that is not as good as it has been, particularly running the ball, and a defense that simply cannot stop anyone, the prospects of winning at SMU, at UCF and at Memphis are slim, not to mention trying to beat an elite team in Cincinnati at home. That is not even mentioning USF and Tulsa.

Tulane is firmly established as one of the worst defenses in the country, having entered the game Thursday in the bottom seven in average yards allowed and in the bottom five in points allowed.

That puts the onus on the offense to outscore opponents and the Green Wave have not been able to do so.

Outside of the 69 points against overmatched Morgan State, Tulane is averaging a decent 25.6 points per game and that is not enough, considering the Green Wave have allowed 44.2 points per game in the same stretch of games.

Somehow, Fritz and his staff have to figure out how to get their team ready to play, considering the lousy starts they have perpetrated of late.

Now, Fritz and his program have been stretched to the limit. The Houston game simply got too long for the Green Wave, who came up short again.

As the season progresses, rather than getting more answers, there are more and more questions about the 2021 Green Wave and there are no good answers on the horizon. 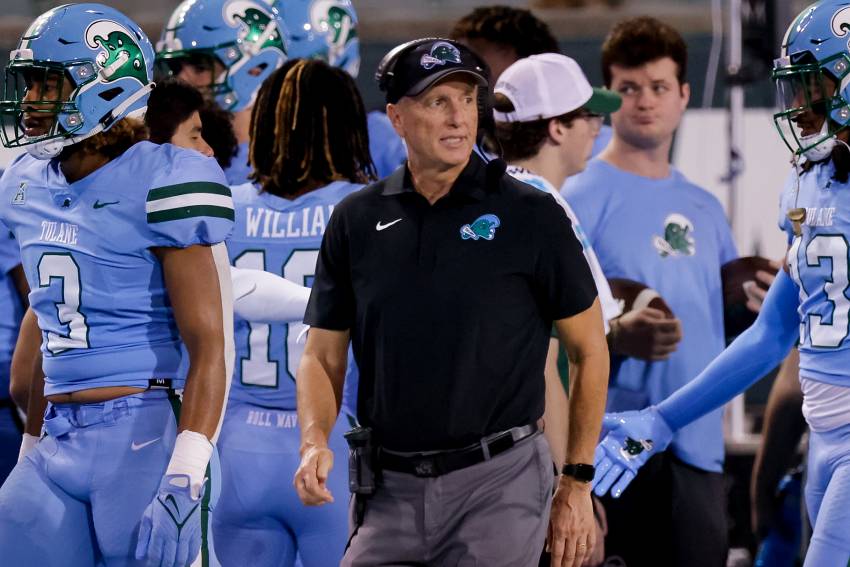 Tulane team, program seem to have hit their ceiling

Tulane had a showcase opportunity Thursday night. This performance demonstrated some improvement compared to the three straight losses but nowhere near enough.