The question to be answered was how No. 21 Tulane would react following a tough, physical, emotional home loss to UCF last Saturday. The concern was real, particularly on a short week against an SMU team on a three-game win streak.

Those concerns were unfounded.

The Green Wave dominated from start to finish Thursday in a 59-24 victory over SMU on Senior Night at Yulman Stadium.

The streak is over as the Mustangs came with seven straight wins in the series over Tulane.

For a half, it looked like a repeat of the Memphis game.

The difference in this one was that Tulane played well in the second half as well, destroying the Mustangs.

The offense was scintillating.

Pratt accounted for six touchdowns, including three rushing and three passing. He is now third all-time in Tulane history in touchdown passes with 61.

The Green Wave gashed a porous SMU defense for 310 yards rushing. That included another 100-yard performance by Tyjae Spears, who rushed 13 times for 121 yards and two scores and he added a 5-yard touchdown catch. Spears is an electric player fully back to his best after a serious knee injury.

By comparison, the New Orleans Saints have recovered five fumbles and have just two interceptions in 10 games and are a pathetic minus 12 in the turnover department. Tulane is 9-2. The Saints are 3-7.

The kicking game, other than the muffed punt, was exquisite. Lawrence Keys returned a pair of kickoffs for an average of 59 yards, nearly breaking both for scores. Casey Glover punted for a superb 45.8 yard average on four punts, including a pair downed inside the 20-yard line. Valentino Ambrosio made all seven extra point attempts and nailed a 33-yard field goal.

Tulane is now one victory away from its first 10-win season since its unbeaten season in 1998.

The math is simple now.

Win at Cincinnati next Friday and Tulane is in the American Athletic Conference championship.

Tulane would like nothing better than getting another shot at UCF.

Tulane is a good football team which has earned its national ranking.

How significant is this 2022 season for Willie Fritz and his team?

In the history of the Green Wave football program, covering almost 130 years since the inaugural game in 1893, Tulane has won nine or more games just seven times.

Tulane has won 10 or more games just three times. The Wave won 12 games in 1998 under Tommy Bowden, including the Liberty Bowl win over BYU to finished No. 7 in the nation.

Prior to that perfect season, the last time Tulane won nine games was in 1979, when the Green Wave finished 9-3, falling in the Liberty Bowl to Penn State under Larry Smith.

Tulane won nine games in 1973, going to the Bluebonnet Bowl under Bennie Ellender and went 9-1 in 1948 under Harry Frnka. The Green Wave were 10-1 in 1934 under Ted Cox, going to the Sugar Bowl and winning.

As for the here and now, Tulane is winning. The Wave won big Thursday night to set up a big game on Black Friday.

On this night, the guys in the black jerseys were the good guys, as in very good. 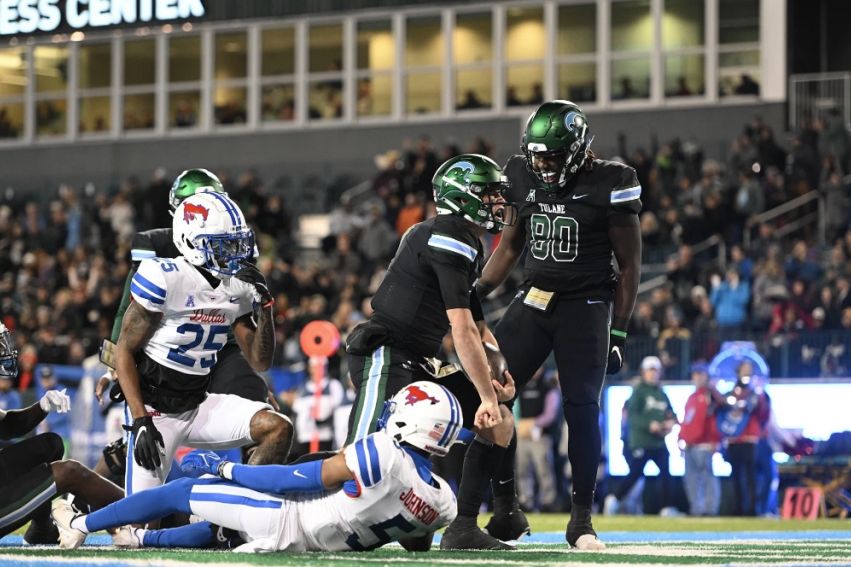 The No. 21-ranked Tulane Green Wave can expect to move up in the polls once more as they bounced back from Saturday’s 38-31 loss to UCF with an 59-24 thrashing of the visiting SMU Mustangs.